A 542-page report, the result of a lengthy investigation requested by the American Psychological Association board, found that top APA officials—including the ethics director—lied and covered up their close collaboration with the Bush-era Defense Department and aligned the association’s ethics policies with the goals of the Pentagon interrogation program. The Hoffman report, named after David Hoffman, the Chicago attorney with the firm Sidley Austin who led the probe, also detailed the involvement of prominent psychologists from outside the APA who aided the CIA’s torture program and helped quash dissent within the spy agency.

While the report’s revelations have shocked many psychologists, psychological operations have long been a part of America’s unconventional arsenal, and mental health professionals have a long history of complicity and participation in some of the worst human rights crimes in American history.

During the early years of the Cold War, some of the nation’s most prominent psychiatrists participated in a 1950s CIA program aimed at creating real-life ‘Manchurian Candidates,’ or programmed controlled assassins without memory. Human guinea pigs were subjected to horrific experiments using drugs and hypnosis in an attempt to induce amnesia and program new behavior. According to a declassified 1952 memo, the goal was to “get control of an individual to the point where he will do our bidding against his will and even against fundamental laws of nature, such as self-preservation.” 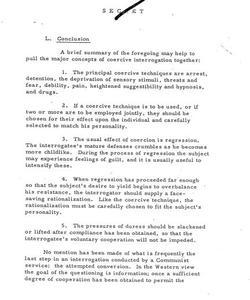 Perhaps the most well-known US mind control program of all time, Project MK-ULTRA was launched in 1953. Thousands of Americans were subjected to unethical and illegal experiments, sometimes without their knowledge, involving drugs (LSD was a favorite), hypnosis, electroshock ‘therapy’ and other horrific abuses. This was all done out of what the government called and “urgent need” to develop “effective and practical techniques to render an individual subservient to an imposed will or control.” The CIA, Army, Navy, Air Force, the departments of Agriculture, Health, Education, and Welfare, numerous universities and some of the best and brightest mental health professionals in North America participated in MK-ULTRA research and experiments.

Loretta Bender, a prominent child neuropsychiatrist who experimented extensively and sometimes disastrously with electroshock ‘therapy’ on children as young as 6 years old, also conducted LSD research in which children as young as 7 were dosed with the powerful new hallucinogen. Some of the children were kept tripping for weeks at a time.

Dr. Robert G. Heath, along with Australian psychiatrist Dr. Harry Bailey, performed CIA-funded experiments on African-American prisoners involving brain electrodes, LSD, and bulbocapnine, a powerful drug which in high doses reduces human beings to vegetables. Dr. Bailey once reportedly told a group of nurses that he and Dr. Heath used blacks for their experiments because it was “cheaper to use niggers than cats because they were everywhere and cheap experimental animals.”

The most renowned of all the the MK-ULTRA doctors was Ewen Cameron, a Canadian psychiatrist who used LSD, various paralytic drugs, sensory deprivation and electroconvulsive ‘therapy’ up to 76 times the normal power in a bid to “depattern,” or reduce his human guinea pigs to a state of reprogrammable amnesia. Many of Cameron’s unwitting test subjects sought treatment for relatively minor disorders; many left him suffering from permanent debilitation including incontinence, amnesia, loss of speech and forgetting close relatives including spouses and parents. Far from being censured for his psychological torture, Cameron served as the presidents of the Canadian, American and World Psychiatric Associations.

In 1963, while MK-ULTRA continued, the CIA authored KUBARK, a torture manual listing various physical and psychological methods of breaking a prisoner’s will to resist interrogation. Many of the abuses in KUBARK would later become familiar to the world as the ‘enhanced interrogation’ techniques used during the ‘War on Terror’: prolonged constraint or exertion, ‘no-touch’ torture (stress positions), extremes of heat, cold, or moisture and deprivation or drastic reduction of food or sleep. KUBARK also instructs on the use of electric shock torture.

From KUBARK evolved Human Resource Exploitation Training Manual, written in 1983, which describes a two-step ‘no-touch’ torture process which heavily influenced the Bush-era ‘enhanced interrogation techniques.’ First, sleep deprivation, hooding, dietary restriction and sexual humiliation are used to disorient and “soften” a prisoner. Then, self-inflicted pain is induced by forcing the prisoner into stress positions, thereby making him feel responsible for his own suffering and increasing the likelihood of cooperation.

During the final intensification of the Cold War in the 1980s, the Reagan administration backed the notoriously brutal but staunchly anti-communist Contras in Nicaragua. After a congressional intelligence committee reported that the Contras, who Reagan called “the moral equivalent of our Founding Fathers,” actually “raped, tortured and killed unarmed civilians, including children” and that “groups of civilians, including pregnant women and children were burned, dismembered, blinded and beheaded,” Congress passed legislation outlawing US aid to the rebels. But US officials secretly encouraged Contra cruelty. A 1983 CIA manual, Psychological Operations in Guerrilla Warfare, was written for use by the Contras. It called for the use of psychological operations (PSYOP), as well as for the assassination of noncombatants and civilians, in order to foment anti-government unrest. When the existence of the murder manual was revealed, President Reagan called it “much ado about nothing.”

In the years following the 1991 Gulf War, the Veterans Administration subjected combat veterans suffering from post-traumatic stress disorder (PTSD), depression and schizophrenia to experiments in which doctors abruptly withdrew medication for these ailments, causing severe depression, delusional behavior and psychosis. Other veterans were given cocaine, amphetamines or other drugs to induce psychosis, delusion or PTSD so that researchers could study those ailments.

During the Bush era, mental health professionals committed grave ethical violations in the name of fighting terrorism. Psychiatrists and psychologists devised or modified many of the torture techniques and other abuses that occurred at Guantánamo Bay and other prisons, including solitary confinement and isolation, sleep deprivation, sexual humiliation and exploitation of detainee fears. The American Psychiatric Association did advise its members not to participate in interrogations or torture, but then-APA president Steven Sharfstein admitted that psychiatrists would not be punished if they disobeyed this guideline.

It should be noted that not all mental health professionals with knowledge of these activities approved, and a handful actually voiced dissent. One of these, Brigadier General Stephen N. Xenakis, a psychiatrist, described in Washington Monthly how one detainee, alleged 9/11 “20th hijacker” Mohammed al-Qahtani, “was questioned for 18 to 20 hours each day, for 48 days.” Xenakis continued:

“He was threatened with dogs, exposed to sweltering heat and icy cold, placed in ‘stress positions,’ prevented from sleeping for several consecutive days at a time, stripped naked and humiliated by female interrogators. At one point, his temperature fell to a potentially fatal 95 degrees. On another, his heartbeat dropped to 35 beats per minute. While Qahtani was being treated by doctors for hypothermia, loud music was played to prevent him from sleeping. And when interrogators were having difficulty breaking Qahtani down, they sought to humiliate him further. A medical corpsman injected him with three and a half bags of intravenous fluid. Qahtani was refused permission to go to the bathroom and urinated in his pants.”

“It is troubling enough that the military physicians have been put in a position that compromises their fundamental ethics,” wrote Xenakis. “Yet there is an even greater danger to our national security when physicians are used as agents of pain and harm. When doctors are implicated in cruel, inhuman, and degrading treatment, then the credibility of our military and our nation suffers across the globe. The assertion that physicians are participating in torture unravels any argument that America is acting on high moral principles.”

The combination of physical and psychological torture in the ‘War on Terror’ was approved at the highest levels of the Bush administration. One of Bush’s main torture architects, retired military psychologist James Mitchell, personally oversaw the torture of terrorism suspects. Under Mitchell’s guidance, interrogators employed the interrupted drowning torture commonly known as waterboarding hundreds of times on just two detainees, even after they were broken and cooperating with their captors, and despite the fact that waterboarding has been prosecuted as a war crime throughout the ages and both US and enemy troops have been tried and convicted for doing it.

When the Senate released its much-anticipated report on CIA torture last December, it excoriated psychologists for their role in detainee abuse. It singled out former military psychologist-turned war profiteer Mitchell, identified in the report by the alias ‘Swigert,’ and his colleague Bruce Jessen, aka ‘Dunbar,’ as planners of a brutal regime in which detainees were tortured nearly to death. Mitchell Jessen and Associates was paid $81 million for their work.

“Neither psychologist had any experience as an interrogator, nor did either have specialized knowledge of al-Qaeda, a background in counterterrorism, or any relevant cultural or linguistic expertise,” the Senate report stated.

Mitchell has defended the role of psychologists in torturing detainees.

“The CIA did what it was asked to do,” he told Real Clear Politics. “People forget what it was like after 9/11. They forget that there was all this talk about [al-Qaeda] bringing in atomic weapons or trying to get chemical weapons.”

There was considerable internal debate within the CIA about whether it was ethical for psychologists to participate in detainee torture. The agency chose prominent psychologist Mel Gravitz, who sat on the agency’s advisory board, to give his opinion on the matter. Gravitz wrote that “the psychologist has an obligation to a group of individuals, such as the nation,” and that the ethics code “must be flexible [sic] applied to the circumstances at hand.” Joseph Matarazzo, a former APA president who was also a partner in Mitchell Jessen and Associates, was also asked whether he believed sleep deprivation amounts to torture. He said it didn’t; but under international law, it does.

“The evidence supports the conclusion that APA officials colluded with Department of Defense officials to, at the least, adopt and maintain APA ethics policies that were not more restrictive than the guidelines that key DOD officials wanted,” the Senate torture report says. “APA chose its ethics policy based on its goals of helping DOD, managing its public relations and maximizing the growth of the profession.”

The tendency to excuse complicity or participation in torture by citing national security threats is a common theme that goes back at least to the Cold War. But this time, there could be consequences. A wave of firings and resignations at the APA is expected, and some observers believe there is the possibility of referrals to the FBI that may lead to prosecutions for criminal wrongdoing, specifically violations of federal anti-torture laws. Such a decidedly hypothetical turn of events would mark the first time that anyone involved in ‘War on Terror’ detainee torture would be held accountable for their role.