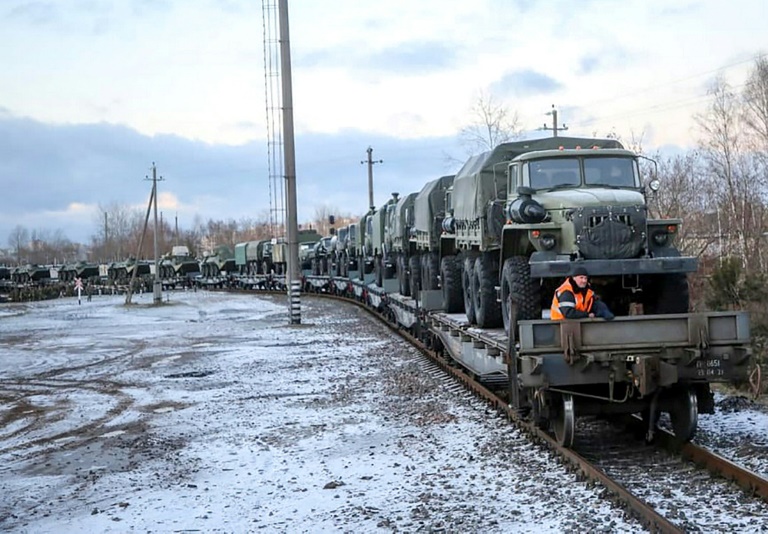 The United States on Tuesday upped its threat assessment of a potentially imminent Russian attack against Ukraine, warning ahead of talks between the top US and Russian diplomats that “no option” would be off the table in the subsequent Western response.

“We believe we’re now at a stage where Russia could at any point launch an attack on Ukraine,” White House Press Secretary Jen Psaki said. “I would say that’s more stark than we have been.”

With tens of thousands of Russian troops massed on Ukraine’s borders, diplomatic efforts are intensifying to avert war on Europe’s eastern fringe.

US Secretary of State Antony Blinken flew to Ukraine for talks on Wednesday, with subsequent stops in Berlin to meet European allies on Thursday, and Geneva to sit down with Russian Foreign Minister Sergei Lavrov on Friday.

Russia insists it has no plans to invade Ukraine, where in 2014 it already seized one province and backed separatist rebels in another region.

However, Moscow’s massive build-up of offensive weaponry and troops leaves little doubt that at least a potential assault is being prepared as a way to back the Kremlin’s broader aim of preventing pro-Western Ukraine from leaving the Russian sphere of influence.

Among Russia’s demands is a pledge from the NATO alliance that it never offer Ukraine membership — something NATO calls a non-starter.

The latest US comments appeared to reflect an increasingly grim view of the standoff.

Putin “clearly is building up a force posture there that provides him multiple options,” Pentagon spokesman John Kirby told reporters. “We still don’t believe that he’s made a final decision.”

Psaki blamed the Russian leader, saying “President Putin has created this crisis” and warned again that unprecedented economic sanctions would follow a Russian attack against Ukraine.

“No option is off the table” when it comes to sanctions, she said, warning of an “extremely dangerous situation.”

Psaki stressed that this could include shelving the Nord Stream 2 natural gas pipeline from Russia to Germany.

The pipeline, which has been completed but not commissioned, is seen as an important part of Europe’s energy supply network, but also a crown jewel in Moscow’s export capabilities.

“Our view continues to be that stopping the Nord Stream 2 pipeline is a credible piece we hold over Russia,” Psaki said.

In a call with Lavrov ahead of his trip, Blinken “stressed the importance of continuing a diplomatic path to de-escalate tensions,” State Department spokesman Ned Price said.

He called on Blinken “not to replicate speculation about the allegedly impending ‘Russian aggression’.”

Earlier, Lavrov said at a joint press conference with visiting German Foreign Minister Annalena Baerbock there would be no further negotiations until the West responds.

In addition to barring Ukraine from eventual NATO membership, Moscow is demanding limits on NATO forces in current member nations like Poland and the Baltic states that were once in the Soviet bloc.

The State Department said Blinken would meet with Ukrainian President Volodymyr Zelensky in Kyiv on Wednesday, to “reinforce the United States’ commitment to Ukraine’s sovereignty and territorial integrity.”

Blinken will then hold four-way talks with Britain, France and Germany in Berlin before he meets Lavrov on Friday.

The Belarusian defense ministry said it was hosting the drills because of the continuing “aggravation” of military tensions, including on its western and southern borders.

Ukraine is located south of authoritarian Belarus, and east of NATO and EU member Poland.

Neither Moscow nor Minsk has disclosed the number of troops involved, but video published by Belarus showed military vehicles including tanks being unloaded from trains.

Erdogan told reporters in Albania an invasion was not “a realistic option” because “Ukraine is a powerful country.”

The types of equipment being sent “are not strategic weapons and pose no threat to Russia,” he said, describing them as “light, anti-armor, defensive weapon systems.”

In this article:Russia, Ukraine News