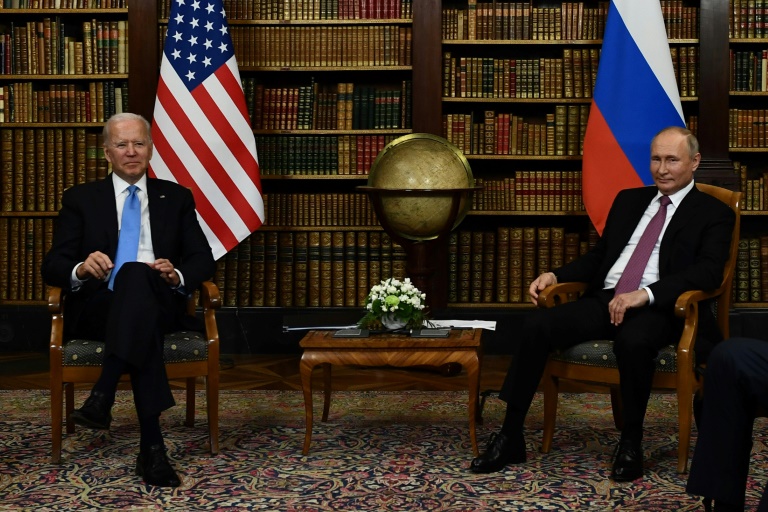 The United States said Wednesday it had held “professional and substantive” talks with Russia focused on arms control, as the two powers met in Geneva in a fresh bid to bring stability to a fraught relationship.

The closed-door talks were a follow-up to last month’s summit, also held in the Swiss diplomatic hub, between Russian President Vladimir Putin and US President Joe Biden, who both described their first encounter as frank and business-like.

US Deputy Secretary of State Wendy Sherman and Russian Deputy Foreign Minister Sergei Ryabkov touched elbows and wore face masks as they opened the talks, according to photos by the US mission in Geneva.

“We remain committed, even in times of tension, to ensuring predictability and reducing the risk of armed conflict and threat of nuclear war,” he said in a statement.

The two sides agreed to meet again in September and speak informally until then as they determine topics to pursue, he added.

US officials will also brief NATO allies on the discussions during a visit Thursday to Brussels, he said.

The Russian foreign ministry in a statement said the talks addressed “maintaining strategic stability, the prospects for arms control and measures to reduce risks”.

It added that the two sides looked at “further development of cooperation”.

The talks were focused on arms control, an issue that remains thorny but is one area where the Biden administration has shown a willingness to work with Russia, already extending the New START treaty on reducing nuclear arsenals.

Bonnie Jenkins, who one week ago was confirmed as the under secretary of state for arms control and international security affairs, took part in the talks, which the State Department had said would look to “lay the groundwork for future arms control and risk reduction measures”.

Ryabkov told Russian news agencies on Tuesday the talks would allow Moscow to “understand how serious the mindset of our US colleagues is in terms of establishing a concentrated, energetic dialogue in strategic stability”.

But he added: “I would not raise the bar of expectations.”

The diplomacy comes amid tensions on multiple fronts between the two nations, with Washington blaming Moscow for a wave of cyberattacks, for which Russia denies any responsibility.

Biden on Tuesday accused Putin of seeking to disrupt the 2022 US congressional elections by spreading “misinformation”.

“It’s a pure violation of our sovereignty,” he said.

Putin has “a real problem: he is sitting on top of an economy that has nuclear weapons and nothing else,” Biden added. “He knows he is in real trouble, which makes him even more dangerous.”

Putin has nonetheless welcomed Biden’s efforts to bring more predictability to the relationship between the two global powerhouses.

During their Geneva summit, the two presidents, who hold the world’s largest nuclear arsenals, shook hands, spoke for more than three hours and stressed the importance of dialogue.

Andrey Baklitskiy, a senior research fellow at the Centre for Advanced American Studies at the Moscow State Institute of International Relations elite university, said the announcement of any working groups would give a steer as to where the negotiations are heading.

“What we could get from this meeting is that general understanding of what things concern each party; how those interact,” he told reporters in Geneva via video-link.

“If we hear… that consultations went well, we might guess that at least the parties perceive each other as ready for business.

“It seems that you can have business with the Biden administration. If they agree to something, at least they will try to follow through.”

Baklitskiy said the announcement of when the next meeting might be could make a “considerable difference”, given the US domestic elections schedule.

In this article:Russia, United States