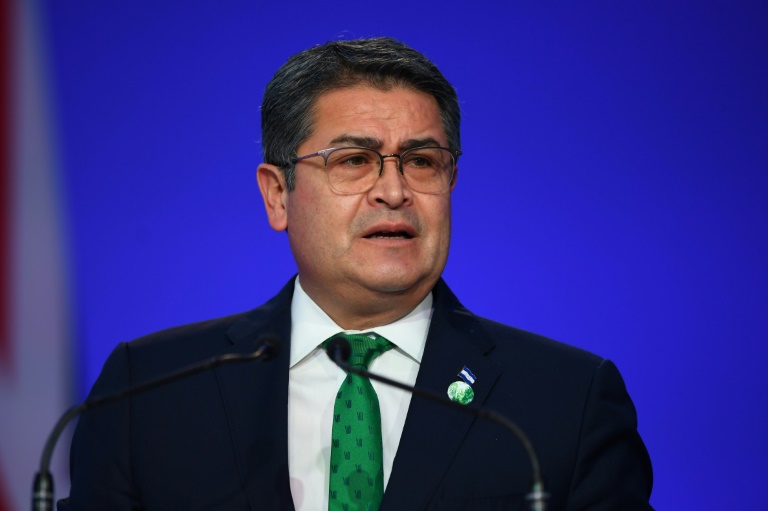 The United States has asked Honduras to extradite former president Juan Orlando Hernandez who is suspected of drug trafficking, a Honduran official told AFP on Monday.

Police special forces were seen encircling Hernandez’s residence in the capital Tegucigalpa on Monday evening, while the official, who declined to be named, said the former president is currently in Honduras.

Hernandez, a former US ally who left office last month, has been linked to drug trafficking operations by New York prosecutors.

Earlier, the Honduran foreign ministry had said on Twitter that an “official communication from the US Embassy” was sent to the Supreme Court formally asking for the provisional arrest of a “Honduran politician” for extradition.

The ministry did not name the politician.

News channel CNN broadcast images of the document, which made a “formal request for provisional arrest for the purpose of extradition to the United States of America of Juan Orlando Hernandez Alvarado.”

AFP has learned that the Supreme Court will meet in an emergency session on Tuesday to appoint a judge to consider the request.

Speaking to a local TV channel, Hernandez’s attorney Hermes Ramirez said the police deployment constituted an “attack” on the ex-president’s rights as it they had prevented advisers from coming to the residence.

Ramirez said no arrest warrant had been served to Hernandez, who has repeatedly denied any involvement in drug trafficking.

During his eight years in office, Hernandez cultivated close ties with Washington, though his tenure was dogged by accusations of corruption, and of his relatives and alleged associates having links to the drug trade.

US Secretary of State Antony Blinken revealed this month that Hernandez had been blacklisted last year, with his name added to a register of people denied entry to the United States for corrupt or anti-democratic action in El Salvador, Guatemala and Honduras.

Hernandez’s lawyer said the former president has immunity, however, because he has joined the Guatemala-based Central American Parliament.

Hernandez joined Parlacen hours after leaving office on January 27, when leftist Xiomara Castro was sworn in and vowed to transform the “bankrupt” country she intended to turn into a “socialist and democratic state.”

Even though Hernandez supported US anti-drug campaigns, traffickers caught in the United States claimed to have paid bribes to the president’s inner circle.

Alleged associate Geovanny Fuentes Ramirez was sentenced by the United States this month to life in prison for drug trafficking.

Blinken said in a statement last week that “according to multiple, credible media reports” Hernandez “has engaged in significant corruption by committing or facilitating acts of corruption and narco-trafficking and using the proceeds of illicit activity to facilitate political campaigns.”

Hernandez has denied all charges and claims the accusations are a part of a revenge plot from the same drug lords that his government captured or extradited to the United States.