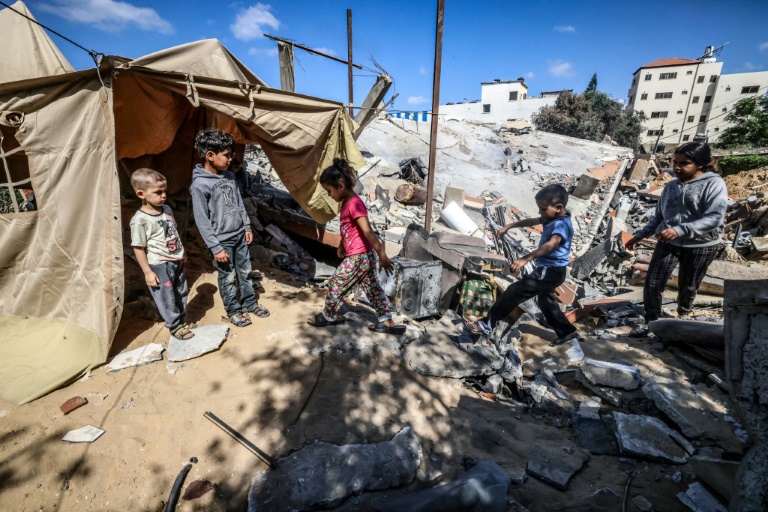 A UN official in war-battered Gaza Sunday called for a “genuine political process” to avert further bloodshed after the military conflict between Israel and Islamist group Hamas that ravaged the Palestinian enclave.

As emergency response teams worked to clear the rubble, and Gaza residents assessed the damage to their homes and shops, top UN staff visited the territory after an Egyptian-brokered ceasefire Friday halted 11 days of mutual bombardment.

Israeli air strikes on the Gaza Strip since May 10 have killed more than 200 Palestinians, rendered thousands homeless and laid waste to buildings and key water and power infrastructure in the blockaded territory.

It was the latest such bombardment to hit the crowded Mediterranean coastal strip of some two million people after three previous wars with Israel since 2008.

Philippe Lazzarini, head of the UN Palestinian refugee agency UNRWA, told AFP that the reconstruction needed to go hand in hand with efforts to create “a different political environment”.

Speaking earlier to a group of journalists, he said “the layers of hardship in Gaza keep getting thicker” because the root causes of the conflict have not been addressed.

US President Joe Biden on Friday pledged to help organise efforts to rebuild Gaza and said creating a Palestinian state alongside Israel is the “only answer” to the conflict.

“We still need a two-state solution,” he said.

Israeli strikes on Gaza killed 248 Palestinians, including 66 children, and have wounded over 1,900 people, the Gaza health ministry says.

Rockets and other fire from Gaza claimed 12 lives in Israel, including one child and an Arab-Israeli teenager, an Israeli soldier, one Indian, and two Thai nationals, medics say. Some 357 people in Israel have been wounded.

There is controversy about how many of those killed in Gaza were combatants, and how many were civilians. Israel’s Prime Minister Benjamin Netanyahu said the bombing campaign had killed “more than 200 terrorists” in Gaza.

Lynn Hastings, of the UN humanitarian agency OCHA, said that beyond the material damage, the intense bombing had done severe harm to many people’s mental health.

“That really speaks to the amount of trauma that was experienced this time, where there was absolutely no pause for people to breathe.”

“The comments that I have heard are not ‘I need access to water’ — even though there are 800,000 people who don’t have access to clean water right now — but… about the impacts on their lives overall and how they are ever going to recover from this,” she said.

Authorities on Saturday started distributing tents and mattresses in the Gaza Strip, as OCHA said at least 6,000 people had been made homeless by the bombardment.

Convoys of lorries bringing much-needed medicine, food and fuel entered Gaza on Friday through the Kerem Shalom crossing after Israel reopened it.

The international community has welcomed the ceasefire and the UN Security Council on Saturday called for “full adherence” to it.

Peace talks have stalled since 2014, including over the key issues of the status of occupied east Jerusalem and Israeli settlements in the occupied West Bank.

Israeli forces had moved in on Palestinian worshippers at the site toward the end of the Muslim holy month of Ramadan.

They were seeking to stop protests against the expulsion of Palestinians from their homes in the east Jerusalem neighbourhood of Sheikh Jarrah to make way for Jewish settlers.

The clashes prompted Hamas to launch rockets from Gaza towards Israel on May 10, and Israel responded with air strikes.

On Sunday, Jewish visitors entered the Al-Aqsa compound for the first time in about three weeks.

Haim Elboim, 20, said visiting felt “very good” and told AFP that “this is the centre of the land of Israel, of the people of Israel.

“That’s why we created a Jewish state,” he said of the establishment of the country in 1948 on land where Palestinians lived.

Israeli police on Friday fired stun grenades at worshippers in the Al-Aqsa mosque compound, and Israeli forces beat an AFP photographer who was covering the unrest.

The incident was reminiscent of the tensions that sparked the latest round of conflict.

In this article:Children, Gaza, Israel, Palestinians