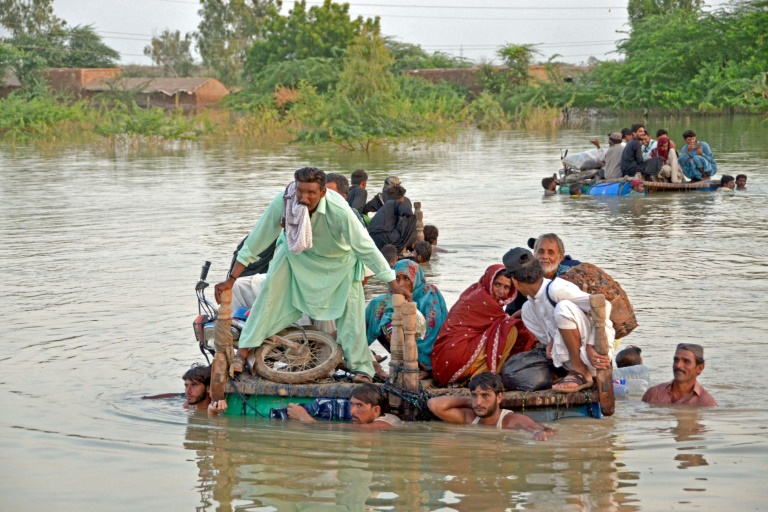 A third of the country is under water — an area the size of the United Kingdom — following record rains brought by what Guterres has described as “a monsoon on steroids”.

Pakistan officials say it will cost at least $10 billion to rebuild and repair damaged infrastructure — an impossible sum for the deeply indebted nation — but the priority, for now, is food and shelter for millions made homeless.

“Everything is drowned, everything washed away,” said Ayaz Ali, suffering from fever as he reluctantly took his place Thursday on a navy boat rescuing villagers from flooded rural communities in southern Sindh province.

In a tweet en route to Pakistan, Guterres said he wanted to “be with the people in their time of need, galvanize international support and bring global focus on the disastrous repercussions of climate change”.

Pakistan receives heavy — often destructive — rains during its annual monsoon season, which are crucial for agriculture and water supplies.

But a downpour as intense as this year’s not been seen for decades, and Pakistan officials blame climate change, which is increasing the frequency and intensity of extreme weather around the world.

Pakistan is responsible for less than one percent of global greenhouse gas emissions, but is eighth on a list compiled by the NGO Germanwatch of countries deemed most vulnerable to extreme weather caused by climate change.

A flood relief plan scaled by the Pakistan government and UN last month called for an immediate $160 million in international funding, and aid is already arriving.

On Thursday a US Air Force C-17 landed — the first American military plane in Pakistan for years — bringing desperately needed tents and tarpaulins for temporary shelter.

While Washington is a key supplier of military hardware to Islamabad, relations have been fractious as a result of conflicting interests in neighbouring Afghanistan — especially since the Taliban returned to power there in August last year.

The meteorological office says Pakistan received five times more rain than normal in 2022 — Padidan, a small town in Sindh, has been drenched by more than 1.8 metres (70 inches) since the monsoon began in June.

The effect of the heavy rains has been twofold — flash floods in rivers in the mountainous north that washed away roads, bridges and buildings in minutes, and a slow accumulation of water in the southern plains that has submerged hundreds of thousands of square kilometres (miles) of land.

In Jaffarabad district of Balochistan Thursday, villagers were fleeing their homes on makeshift rafts made from upturned wooden “charpoy” beds.

Thousands of temporary campsites have mushroomed on slivers of dry land in the south and west — often roads and railway tracks are the only high ground in a landscape of water.

With people and livestock cramped together, the camps are ripe for outbreaks of disease, with many cases of mosquito-borne dengue reported, as well as scabies.

The floods have killed nearly 1,400 people, according to the latest National Disaster Management Authority report.

Nearly 7,000 km of roads have been damaged, some 246 bridges washed away and more than 1.7 million homes and businesses destroyed.

In this article:Flood, guterres, Pakistan, Un