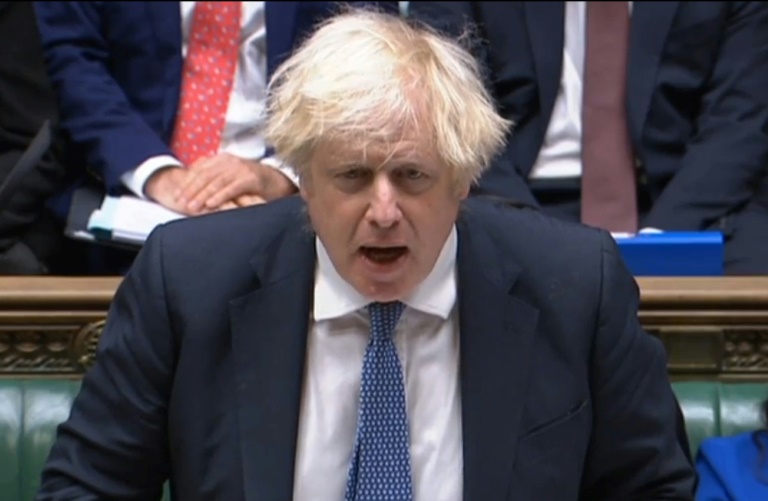 The leaked footage appears to contradict more than a week of denials by Johnson and his ministers that a party took place, following newspaper reports dozens of staff had attended an evening-long gathering on December 18, 2020.

The embattled leader, who faced calls for his resignation from some opposition politicians during a raucous parliamentary question session, vowed “disciplinary action” would be taken if the investigation found rules had been broken.

The probe will be led by Britain’s most senior civil servant.

“I understand and share the anger up and down the country at seeing No 10 staff seeming to make light of lockdown measures,” he said.

“I apologise unreservedly for the offence that it has caused… and I apologise for the impression that it gives.”

Johnson added he had been “repeatedly assured” that there was no party inside his number 10 Downing Street office and that no rules were broken since the allegations first emerged.

But it is the latest instance of apparent government hypocrisy over restrictions after several previous scandals, including health secretary Matt Hancock resigning in June for breaking coronavirus curbs during an affair with an aide.

“They knew there was a party, they knew it was against the rules, they knew they couldn’t admit it, and they thought it was funny,” Labour party leader Keir Starmer said.

“Does the Prime Minister think he has the moral authority to lead and to ask the British people to stick to the rules?” he asked, before other lawmakers assailed Johnson over the scandal.

The incendiary footage shows Johnson’s then-press secretary Allegra Stratton fielding questions from advisor Ed Oldfied and other staff during a rehearsal press conference on December 22 with no media present.

“This fictional party was a business meeting and it was not socially distanced,” she laughs over joking exchanges about “cheese and wine” and whether the prime minister would “condone” such an event.

At that time, London was under strict restrictions and indoor social gatherings of two or more people were banned, while office parties were specifically outlawed.

The video, which was leaked to broadcaster ITV News late Tuesday, prompted an immediate outcry — and Health Secretary Sajid Javid to cancel a series of broadcast interviews Wednesday morning,.

It has led main news bulletins, drawn millions of views online and condemnation from across the political spectrum, with some even calling for Johnson’s resignation.

“The Prime Minister is responsible for losing the trust of the people. He can no longer lead on the most pressing issue facing these islands,” leader of the Scottish National Party Ian Blackford told parliament.

Conservative lawmakers have also been among those demanding answers.

“This isn’t a laughing matter,” Tory MP Roger Gale told the BBC after he watched the footage with “total incredulity”.

He added Johnson must provide a full explanation to parliament, adding: “of course, to mislead the House of Commons deliberately would be a resignation matter”.

The scandal has echoes of an infamous incident earlier in the pandemic involving Johnson’s then-chief aide Dominic Cummings, who drove hundreds of kilometres to stay away from his London home during a lockdown.

It triggered outrage over perceived double standards by the government, and is widely seen as leading to a drop in compliance with restrictions in its aftermath.

With the fast spread of the Omicron variant in Britain, some Conservative lawmakers said the latest scandal would make reintroducing curbs “much more difficult”.

Meanwhile Covid-19 Bereaved Families for Justice said it showcased “the behaviour of people who think they’re above us”.

“There are simply no words to describe how upsetting and shameful it is to then hear Boris Johnson’s team laughing about breaking the rules they had made,” it said in a statement.

“Others followed them and could only say goodbye to their loved ones through a screen.”