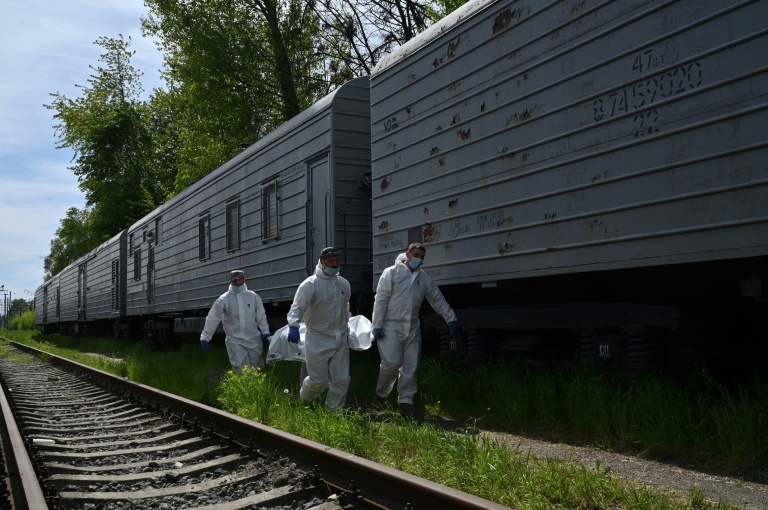 After combing the forests and meadows west of Kyiv, a special Ukrainian unit finally found what they were searching for —- the body of a Russian “occupier”.

For weeks, the team along with similar outfits operating in conjunction with a civil-military cooperation unit have been pulling Russian corpses from the fields, forests, and destroyed structures on the outskirts of the Ukrainian capital.

“If they (Russian forces) won’t do what they were supposed to do as a matter of honour, then we will do it out of respect for the dead,” a soldier going by the call sign Mukhomor told AFP Wednesday just moments after unearthing the body of a slain Russian soldier.

“It doesn’t matter if he is the enemy or not — we don’t judge. These are the rules of international humanitarian law,” he added.

The capital’s suburbs saw weeks of brutal fighting after Russian forces invaded in February — only to stall in the narrow lanes and country roads in the city’s outskirts where they were mauled by Ukrainian ambushes.

In late March, the Russians started to retreat, pulling their battered forces back across the border into Belarus, while Ukraine accused the invaders of leaving scores of their dead behind.

In Zavalivka village west of Kyiv, a forensics team cordoned off a shallow grave where nearby residents said a body had been buried by Ukrainian territorial forces weeks ago.

AFP accompanied the team as part of a trip organised by the Ukrainian military.

Locals allege the Russian fighter had been injured and was begging residents for water before being killed by his comrades ahead of the Russian retreat. AFP could not independently verify the claims.

“He was left near the shop, covered with a poncho. And then our guys buried him,” Zavalivka resident Kateryna Karobchuk, 79, told AFP.

After Ukrainian troops entered the village, the body was hastily buried in the woods as they swept through the area during a clearance operation.

Karobchuk said the corpse was later discovered by her dog with locals tipping off the Ukrainian forces charged with collecting the Russian dead.

“Be careful, we don’t want to miss or damage anything,” said a member of the five-person team outfitted in hazmat suits as they shovelled away piles of black soil, after zeroing in on the location of the body.

After carefully clearing the shallow grave, the team inspected the remains, with the white band tied around the corpse’s right arm signifying the fighter’s affiliation with the Russian military.

The forensics teams patted down the decomposing body looking for any pieces of identification before moving it into a body bag.

After the bodies are found and exhumed, they are stored in a string of refrigerated rail cars stacked with the Russian dead.

The location of the mobile morgues remains a tightly held secret, with Ukrainians fearing a Russian air strike against evidence of the death toll.

To date, Ukraine said its fighters have killed more than 20,000 Russian forces since the start of the invasion. Russia has put the number of its dead much lower than Kyiv’s claim at 1,351 in its last update issued on March 25.

Both sides have been accused of exaggerating their gains and downplaying their losses throughout the conflict.

“They have this beautiful fairy tale that they don’t leave their own people behind, but it’s really a fairy tale,” said Colonel Volodymyr Lyamzin as he watched over the removal of the body in Zavalivka.

Since the body collection effort was launched in recent weeks, some 200 corpses of Russian soldiers have been picked up and stored in Ukraine, with the vast majority found in the capital’s outskirts, according to forensic teams.

More bodies have apparently been picked up by retreating Russian troops. Ukrainian officials have accused Russian forces of deploying mobile crematoria to dispose of the bodies of their soldiers.

According to the Lyamzin, Moscow has shown no interest in facilitating the return of their dead, despite efforts by Ukranian authorities.

“They will be stored in our mobile fridges as long as it is needed,” said Lyamzin, who oversees the recovery operations.

“If Russia will not take them away, after some time our government will pass a resolution and these bodies will be buried here in Ukraine,” the colonel added.