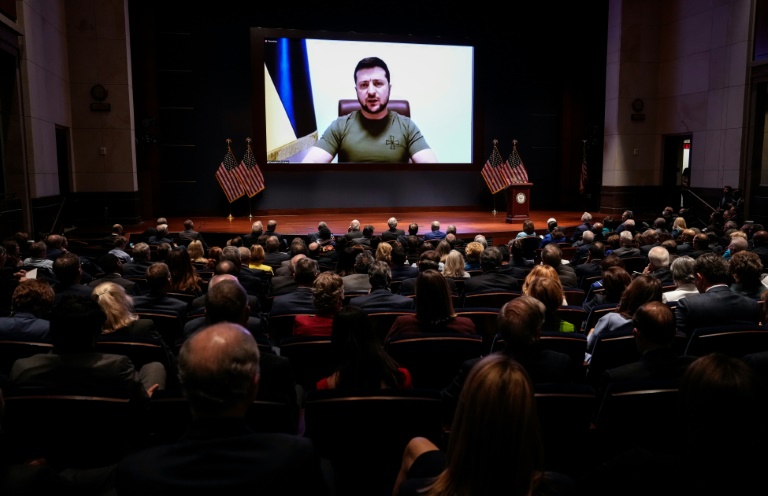 Ukraine’s besieged leader urged the United States Wednesday to reconsider his plea for a no-fly zone, invoking the terror of the September 11 attacks as he ratcheted up pressure on the White House to move aggressively against the Russian invasion closing in on Kyiv.

More than three weeks into a war that has left hundreds of Ukrainian civilians dead and three million displaced abroad, President Volodymyr Zelensky told the US Congress the conflict was “a terror that Europe has not seen… for 80 years.”

“Remember Pearl Harbor, terrible morning of December 7, 1941, when your sky was black from the planes attacking you,” he said, recalling the air raid that brought the United States into World War II.

“Remember September 11, a terrible day in 2001 when evil tried to turn your cities, independent territories, in battlefields,” he told lawmakers via a video link livestreamed to the nation.

“Our country experienced the same every day.”

The third president of post-Soviet Ukraine to address Congress, Zelensky’s appearance was being touted as the most dramatic by a foreign leader since Winston Churchill spoke before Congress in 1941.

But it was civil rights activist Martin Luther King Jr. that the comedian-turned-wartime leader recalled as he pleaded once again for a no-fly zone to defend Ukraine’s skies.

“I have a dream, these words are known to each of you today I can say. I have a need, I need to protect our sky. I need your decision, your help,” he said.

He addressed President Joe Biden directly, urging him to be “the leader of peace” as he showed lawmakers a wrenching video of ruined buildings and injured Ukrainian civilians including children, with the final frame showing the words “close the sky.”

US and NATO officials have until now flatly ruled out enforcing a Ukraine no-fly zone, concerned about being dragged into a direct conflict with a nuclear-armed Russia.

Zelensky’s appearance — greeted by a standing ovation in the US Capitol complex — came less than a week after lawmakers green-lit nearly $14 billion in humanitarian and military aid for the war-torn nation.

Biden is expected to announce $1 billion in new security help to Ukraine later Wednesday — $200 million of it already allocated over the weekend and $800 million in new funds from the aid package signed into law on Tuesday.

But the renewed call for more help to beef up Ukrainian air defenses beyond Stinger and Javelin missiles is likely to maintain the pressure on Biden to go further.

Many lawmakers have backed Zelensky’s pleas for US officials to help broker the transfer of Soviet-style weapons to Ukraine, including MiG fighter jets from Poland and S-300 surface-to-air missile systems.

Biden is grappling with concerns that Russia might see the move as an escalation in the conflict, while officials have also raised questions about how useful MiG fighters would be to Kyiv.

In this article:Conflict, Congress, Russia, Ukraine News, US