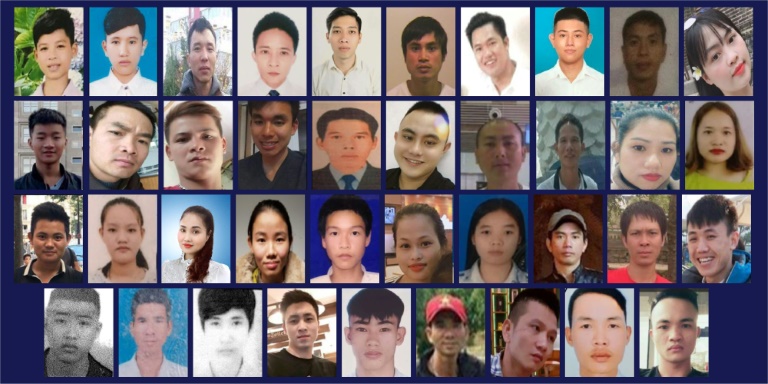 British prosecutors on Tuesday hailed another conviction resulting from a years-long probe into a people smuggling operation that led to the deaths of 39 Vietnamese migrants in horrific conditions inside a lorry.

A British court sentenced Stefan Dragos Damian, a 28-year-old Romanian citizen, to three years and ten months in prison on Monday after he pleaded guilty to conspiracy to assist unlawful immigration, they said.

“Another people smuggler has been jailed for his role which led to the death of 39 Vietnamese people in the back of a lorry,” the Crown Prosecution Service (CPS), which handles prosecutions in England and Wales, said after sentencing.

Monday’s ruling follows a British judge last year handing down sentences of 27 and 20 years to the ringleaders of the people smuggling operation, while two truck drivers were given 13-year and 18-year sentences.

Authorities in Belgium have also put 23 people suspected of involvement on trial.

The victims — the youngest of whom were two 15-year-old boys — suffocated in the truck’s container as they were being transported to what they had hoped would be new lives in Britain.

The lifeless bodies of the migrants were discovered inside the sealed unit at a port near London in October 2019.

The case cast a shocking new light on the lengths migrants will go to to reach Britain — and on the gangs exploiting their desperation.

The CPS noted Damian was “brought to justice” through a multi-agency investigation which involved the National Crime Agency, Essex police, the interior ministry and law enforcement colleagues across Europe.

Italian police detained him last June in Milan on a UK arrest warrant and he was extradited last September.

The UK authorities’ probe established he was part of a wider conspiracy to smuggle people illegally and had fled the country immediately after the discovery of the dead 39 Vietnamese migrants.

“Dragos Damian was a key player in an evil people smuggling conspiracy that made money from misery,” Detective Chief Inspector Louise Metcalfe said in a statement.

She said she hoped the sentence will “serve as a warning to those who think it is acceptable to prey on the vulnerabilities of those who are seeking a different life for themselves and their families”.

In this article:Britain, Court, Migrants, Vietnam