Don’t envision acres of tiny treelike devices being the next source of energy, but think of situations where small amounts of electrical power are needed. That’s the neat thing about the idea.

The idea is the result of a project conducted at Ohio State University where tiny high-tech objects, looking very much like tiny trees were used to generate renewable energy when shaken. The new vibrational energy harvesting platform was described in a study published in the Journal of Sound and Vibration, February 17, 2016.

In GizMag, project leader Ryan Harne explains, “Buildings sway ever so slightly in the wind, bridges oscillate when we drive on them and car suspensions absorb bumps in the road. In fact, there’s a massive amount of kinetic energy associated with those motions that are otherwise lost. We want to recover and recycle some of that energy.”

If anyone has seen or even been on the Golden Gate Bridge during heavy storms, you can actually see the bridge swaying, and this is amplified along with the kinetic energy created by the vehicles passing over the bridge. The point being made in the study is this: Why can’t we harvest that kinetic energy that would otherwise be going to waste? 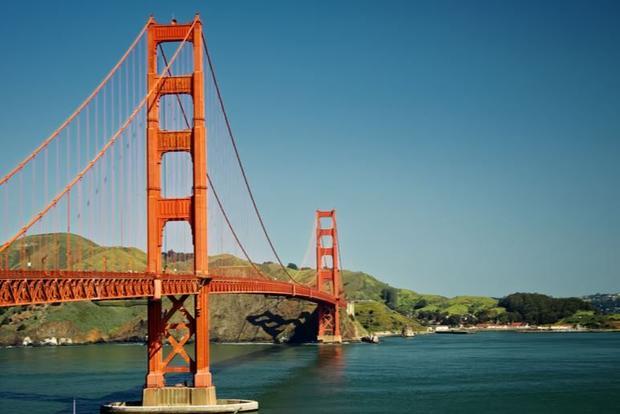 The Golden Gate Bridge sways, even though we may not be aware of the movement.
Steven Pavlov

Actually, scientists have proposed a similar technology, but it was dismissed because the vibrations were considered too random to be of any use in generating electricity. OSU researchers worked on ways to capture the energy generated in a more natural way, hence the treelike structures.

The L-shaped vibration energy harvesting system
Using mathematical modeling, the OSU team came up with an L-shaped treelike structure that would maintain consistent vibrations despite any random large inputs, thanks to something called internal resonance. Internal resonance is a phenomenon that allows some mechanical systems to release internal energy. The energy could then be captured and stored using power circuitry.

The L-shaped structure was built using two steel beams, sort of like the trunk of a tree with a branch. The structure was held in place by a clamp and attached to a structure that shook back and forth under high frequencies. The beams were connected using a strip of polyvinylidene fluoride (PVDF) that converted the structural oscillations to electrical energy.

Doing this, the team was able to produce 0.8 volts of electricity. But when they added more inputs, creating additional “noise,” the system reached what is called the “saturation phenomena.” In other words, the “tree” reached a tipping point where high-frequency energy was suddenly channeled into a low-frequency oscillation, producing 2.0 volts of electricity.

This form of green energy could be used in areas where other green options don’t fit, such as in busy metropolitan areas where the L-shaped mechanism could be stuck to the bottom of a bridge or even built into a skyscraper.