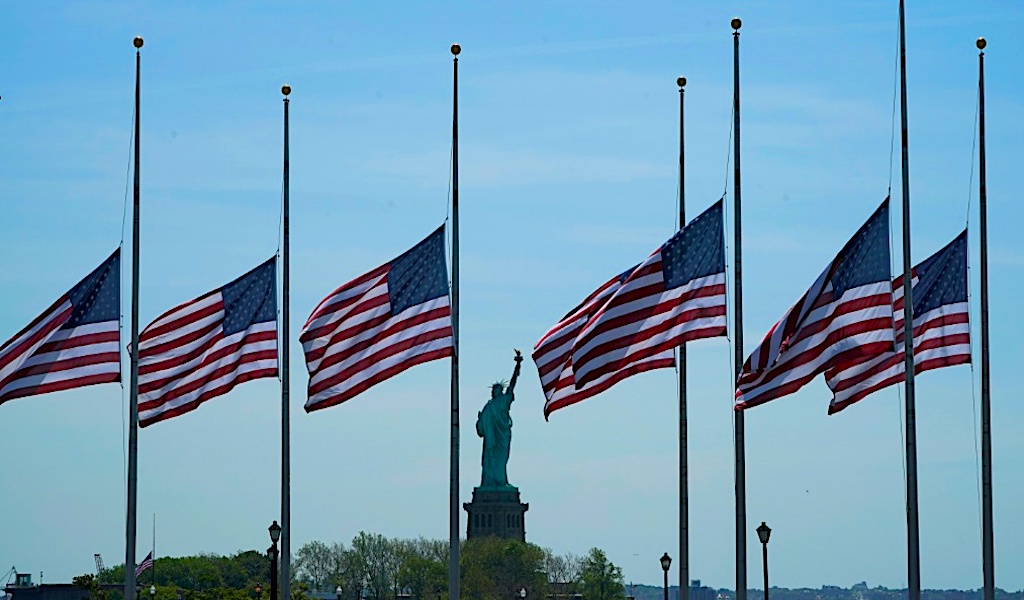 Trump wants more people to be armed to prevent “evil”. It’s never happened that any of these gun-toting heroes have ever stopped or prevented a mass shooting, but what the hey. Trump also wants a security overhaul at all schools. Schools should be “the hardest targets in the country”, he says. A single entry point with checks, metal detectors, and armed guards in schools is also needed.

This would cost billions for 130,000 elementary schools nationwide. It also apparently hasn’t occurred to the gun-skank genius factory that kids have to come out of school sooner or later. The schools, in effect, are to blame for being there, not the shooters.

In other words, the more the United States looks and acts like a jail, the better. There was, predictably, no mention of taking guns away from anyone. A big bad bang-bang makes you somebody. It’s a way of defending yourself against other people with guns. …But guns aren’t the problem.

The fact that Trump never did a damn thing about crime, gun crime, or anything related to any of these issues during his “presidency” apparently isn’t a problem, either. Nor has the simple equation that all of these nuts have had easy access to guns and deranged ideologies getting a lot of interest in this Mensa Escapees Paradise.

It’s a vision of an America that is so insane, unaffordable, and dangerous to live in that everyone will want to live there. Apparently, the tides of protestors at the NRA meeting didn’t agree. They were ignored as usual, too.

Since when does this make any sense at all?

Every country has guns and lots of them. I can shoot a gun and hit a target myself. There’s just one slight issue – NO other country on Earth has this problem as a normal way of life. The solution is a gun is the big multigenerational cultural message for Americans. Doesn’t seem to be working too well, does it?

Guns are above all a defense against something. This is ironic. They’re supposed to be a defense against risk. …But you don’t remove the risks. You don’t disarm the risks. The fact that so many Americans have guns is no deterrent at all to any fool who wants to blaze away at them. This ridiculous circular total failure of logic is the main problem.

Why do you need assault rifles to live in your own home? Maybe, maybe not. There’s an old Robin Williams joke;  “I’m going to the kitchen! Cover me!” which about sums it up.  Can you live in your own home with guns? There are about 400 unintentional deaths in the US  per year from firearms.

The BBC has some interesting figures on gun deaths. 1.5 million Americans suffered firearms deaths between 1968 and 2017.  That’s more dead Americans than all wars since the War of Independence.  It also leaves out the number of injuries per year. A lot of these injuries were related to handling, not intentionally firing, too.

There’s no lack of information and it goes back a long, long way. Search on Google for “gun deaths history” and you’ll get 148 million responses.  Most of this information is about America’s quaint obsession. A hint, perhaps?

American Karma – from Sand Creek to Sandy Hook and beyond

America’s gun history includes quite a few massacres. The massacre at Sandy Creek was an “official” massacre in which the cavalry commander reported killing 500-600 Cheyenne and Arapaho warriors. Not exactly; total casualties were 130, of whom 105 were women and children and included a few folksy self-righteous mutilations by the “soldiers”.

Read the Sand Creek story if you dare; it’s like a blueprint for the endless mass shootings. People are just living their lives and some nuts start shooting them. Some nutcase has inspired them to do that. The war against the Cheyenne and Arapaho was as crazy, psychotic, and unjustifiable as America’s lunatic war on itself now.

The war on the Indians had its ranting advocates, too, like the “civil war” dialog among Trump and QAnon supporters. Sounds like fun, doesn’t it? This would be an encore to the first Civil War, this time with phones! Aren’t you lucky?

This karma is self-inflicted. America has brought this on itself with its traditional “never solve problems; just let them pile up forever” approach to every single social disaster.

…And it’ll keep right on happening until you fix it.  Unless you want Kiddie BPs and similar stuff on the shopping list, get it right, this time.