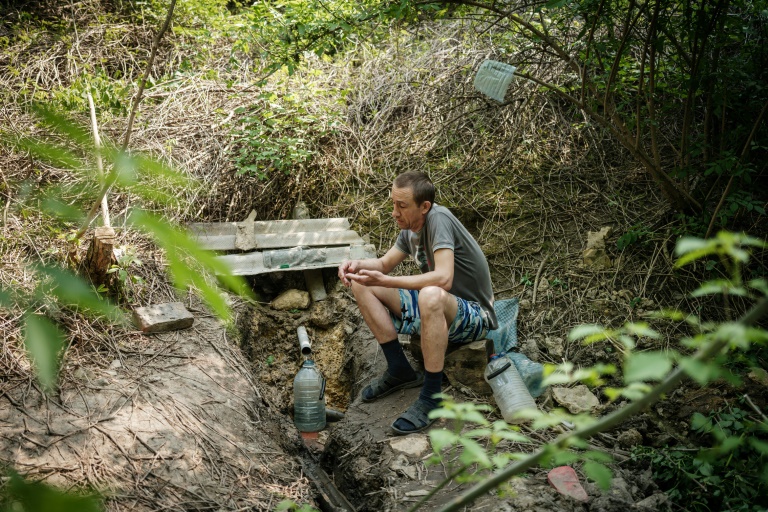 The water trickling from a pipe sticking out of a mound of dirt in Ukraine’s besieged city of Lysychansk offered the last lifeline to the emaciated bricklayer’s family of nine.

Artyom Cherukha crouched and listened to the shells whistling between shifting Russian and Ukrainian positions around him while slowly filling his plastic bottles from the natural spring.

A man-sized tail end of an Uragan missile hung between some branches of a tree a few steps above his leafy ravine.

But the 41-year-old seemed oblivious to the fact that the weapon could unleash  death and destruction overhead.

He waited for the drips of water with his elbows planted on his knees and stared without moving.

“I feel total apathy. I am morally starved — not to mention physically,” he said in a voice devoid of emotion.

“We sit here counting the bombs.”

A crescent of industrial cities across Ukraine’s eastern front — populated by an untold number of residents hiding in cellars and basements — are steadily losing access to water and food.

Lysychansk was an important coal mining centre with centuries-old churches and 100,000 workers before Russia invaded its pro-Western neighbour on February 24.

The city’s ghostly streets now stand in ruins while its surrounding roads are being shelled with a ferocity that has forced all humanitarian supply missions to stop.

The highways leading out of Lysychansk and its sister city Severodonetsk are witnessing an organised retreat by some of Ukraine’s most hardened units and their biggest guns.

The few vehicles speeding in at breakneck speed to try and avoid the rockets and mortar fire appear to be primarily linked to rescue operations for Ukraine’s wounded troops.

Some of the residents trapped inside who come out to catch a glimpse of the sun and fill their bottles from the stream have the glazed look of shock.

“There is no water in the city. We come here because that is all there is,” welder Andriy Tytyunkov said in a halting voice.

“But when the bombing is really bad, you have to stay inside,” the 39-year-old said. “If it gets really heavy, it can hit anywhere.”

Generations of Lysychansk residents in the northern part of the city facing Severodonetsk have been coming to their hidden spring in critical times.

Locals said this happened in World War II and then again when Russian-backed insurgents overran parts of Ukraine’s east in 2014.

The city’s civil-miliary administration attributed the current water stoppage to unspecified damage that could not be repaired until the fighting stopped.

“There will be no water in the city until the end of the war. Repairs are not possible,” the administration announced on its social media feeds late last month.

The spring offers salvation — of a sort.

Its water must first penetrate chemicals-filled earth from one of the most polluted corners of eastern Europe.

Another ravine next to the spring is filled with a bubbly waste streaming out of one of the city’s numerous industrial plants.

“It needs to be boiled,” former sailer Volodymyr Ivanov said while holding up his bottle against the sun.

“It looks fairly clean but no one has ever tested it. Who knows what is inside.”

Yet even the simple task of boiling water becomes a life-threatening dilemma in times of war.

Cherukha boils his on a counter top because the city still has gas. A cut would force him to start building fires in his yard.

“But people are too scared to do that. Someone will see you there and might decide to shoot. You just never know how people’s minds work these days,” he said.

Then there is the lack of food.

Cherukha said the last humanitarian supplies reached the city at the start of last week.

“We have almost completely run out. I am dead serious,” he said with a nod of the head.

“My kids are little and run around smiling and laughing. Laughing is good. But they do not understand,” Cherukha said.

He expects his supplies to last him another two or three days.

“Even if we try our best to stetch it out and feed the children once a day, we would only have enough for three days. How do you tell your children there is nothing to eat?”