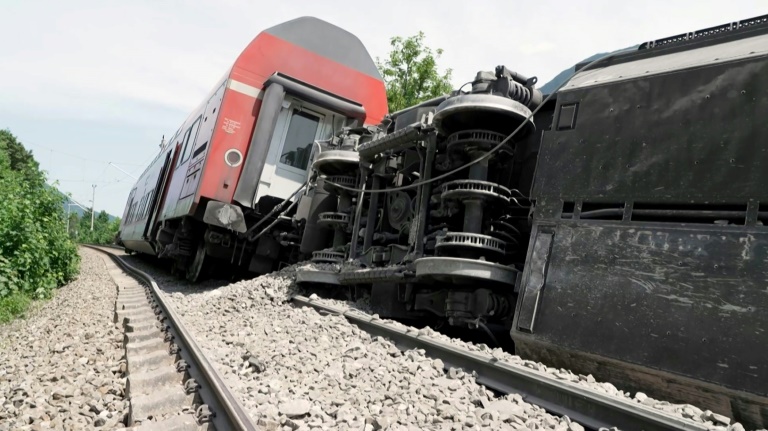 At least three people were killed and several others injured on Friday as a train derailed near a Bavarian Alpine resort in southern Germany, a region gearing up to host the G7 summit in late June.

Several carriages of the red-coloured regional train were lying on their sides on a grassy area next to a highway.

Rescuers were standing on the top facing side of the carriages, using ladders to climb into the waggons to reach trapped passengers.

“In the serious train accident, as of 1:55 pm (1155 GMT), three people were fatally injured and an undetermined number of other train passengers hurt,” said police in a statement, adding that a huge rescue operation was underway.

A spokesman from local authorities of Garmisch-Partenkirchen said 60 people were injured, including 16 seriously, although police were unable to confirm the figures.

The accident came as rail officials were nervously watching if a new nine-euro monthly public transport ticket valid across Germany would lead to overcrowded trains over the bank holiday weekend.

Stefan Sonntag of Upper Bavaria’s police force said the regional train was “very crowded and many people were using it, hence the high number of injured”.

School holidays were also starting from Saturday in the two southern German regions Baden-Wuerttemberg and Bavaria, raising fears children may count among the train passengers. But Sonntag said he did not have information on that.

The train had just left Garmisch-Partenkirchen for Munich, when the accident took place in the Burgrain district of the resort town.

Part of the route between Munich and Garmisch-Partenkirchen has been blocked off and traffic diverted, German rail operator Deutsche Bahn said.

Popular mountain resort Garmisch-Partenkirchen and the surrounding regions are gearing up to host the G7 summit of world leaders later this month.

From June 26-28, the heads of state and government including US President Joe Biden are due to meet at Schloss Elmau — 11 kilometres (seven miles) from Garmisch-Partenkirchen.

Police and soldiers who had been deployed to prepare and secure the site ahead of the summit have now also been diverted to help in the rescue operation.

Three helicopters from Austria’s Tyrol region have been scrambled to the scene to provide first aid, according to media reports.

The most recent fatal crash took place on February 14, 2022, when one person was killed and 14 others hurt in a collision between two local trains near  Munich.

In 2017, a  passenger train and a stationary freight train collided near the western city of Duesseldorf injuring 41 people.

In this article:Accident, Germany, train