In August, Digital Journal reported on the die-offs, described by NOAA as an “unusual mortality event.” The deaths of the 11 fin whales,14 humpbacks, one grey whale, and four unidentified whales triggered investigations in the U.S. and in British Columbia.

Dr. Andrew Trites, director of the UBC Marine Mammal Research Unit, has been investigating the cetacean die-offs, and he suggests that the large mass of warm water in the Pacific Ocean off the coast of North America, known as “the blob,” may be responsible, according to the Huffington Post. 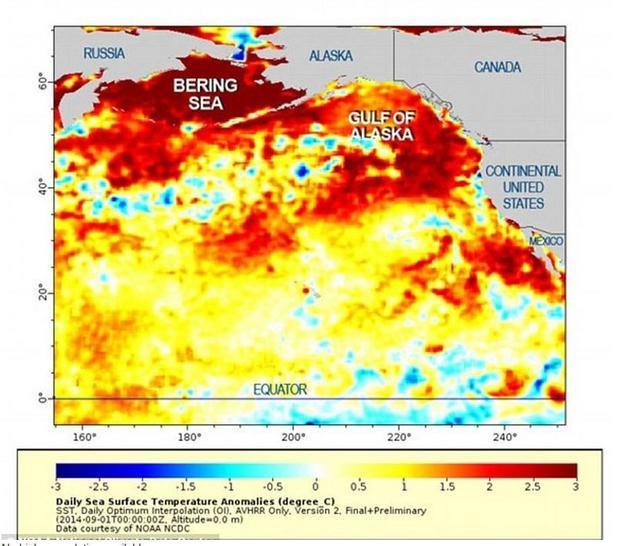 : A ‘blob’ of warm water 2,000 miles across is sitting in the Pacific Ocean (shown in image). It has been present since 2013. Since June 2015 it has extended from Alaska to Mexico.
NOAA/NCDC

Dr. Trites spoke with CTV News: “We can rule a few things out by having inspected their bodies to rule out things such as starvation, any signs of disease, any signs of having been hit by ships or caught by fishing gear,” Trites said. “We have to begin, in essence, doing ecological detective work.”

Trites says the blob has been blamed for causing toxic algae blooms. The Domoic acid, found in these toxic algae blooms is a neurotoxin and is likely passed on to krill, a common food source for both fin whales, humpbacks and other whales. When ingested in large amounts, the neurotoxin can cause brain damage or even death in birds and mammals.

“I think the most likely explanation for the deaths of these whales is that they were out at a big smorgasbord, a big party, and some of them got food poisoning,” Trites said. “They ate too much, and it caused their deaths.”

The Vancouver CTV News quotes Dr. Trites as saying the deaths of the whales should be a “wake-up call” to everyone that climate change is affecting not only those of us on land, but the creatures in the seas.

“The fact that three times more whales have died this year than we’ve seen in past years is a sign that something major has happened,” Trites said.

It’s important to remember that scientists at NOAA, Canada’s Department of Fisheries and Oceans (DFO), and Victoria’s Ocean Networks Canada (ONC) have not been able to confirm that a neurotoxin is responsible for the deaths of the cetaceans because none of the carcasses have been fresh enough to test for the toxins.

Scientists with the ONC support Trites’ hypothesis. “A whale’s at the top of the food chain, and so in fact they are an accumulator of toxins,” said Richard Dewey, ONC’s associate director for science. “We would expect the larger species to have the highest concentration of these toxins.”

In an email, the DFO told CTV News the theory given by Trites was so far, just speculation.