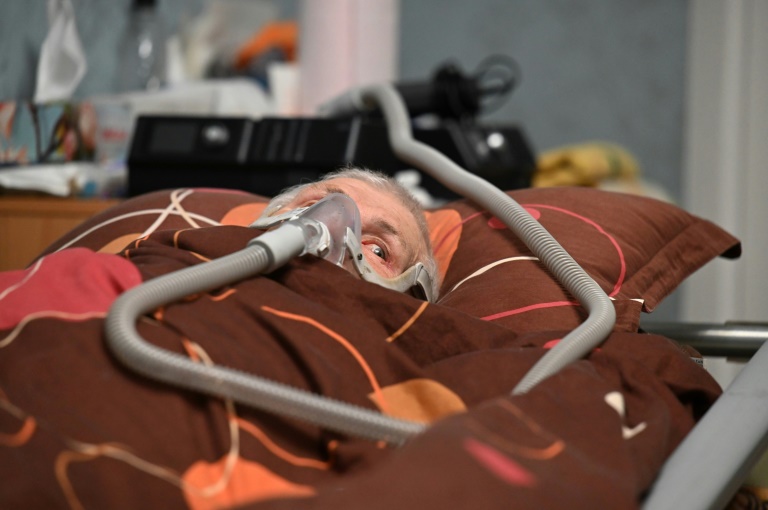 Valentyn Mozgovy cannot breathe on his own, and keeping his ventilator powered during Ukraine’s blackouts has become a matter of life or death.

Mozgovy suffers from amyotrophic lateral sclerosis (ALS), a degenerative neurological condition that has left him paralysed and unable to breathe without assistance.

“He is alive, you see. That means I figured it out,” his wife, Lyudmyla Mozgova, told AFP in their apartment in the capital Kyiv.

Next to her, her husband was wrapped in a patterned duvet in a medically adapted bed, his face barely visible under the ventilator.

The Mozgovys have come a long way since the first long blackout after the targeted wave of strikes on energy infrastructure began in October.

Valentyn had to breathe on his own for ten excruciating minutes.

“The way he breathed was scary… we had no clue what to do!” his wife said.

As the outages became the norm, the Mozgovys adapted.

“His body doesn’t move, but his mind is very bright, he gives a lot of advice… he is our captain,” she said.

She set up a power storage system and extra batteries for her husband’s respiratory unit and medical mattress — which regulates the pressure felt by bedridden patients.

However prepared they have tried to be, their situation is precarious.

“I wish there was a bit of stability, so we could understand when there will be electricity… to make a decision on how to cope.”

Mozgova realises how lucky they are to be able to afford the equipment needed to keep her husband alive.

“It was very expensive, our children helped us… I don’t even know what advice to give to those who don’t have money,” she said.

“If all these people were suddenly unable to use their life-saving devices and went to the hospital at the same time, our medical system would simply break.”

Tetyana Venglinska had no choice but to hospitalise her 75-year-old mother, Eva, after three months of exhausting outages.

Eva, who has been diagnosed with lung cancer, needs to be linked to a device delivering supplementary oxygen at all times, her daughter Tetyana explained, sitting on the corner of her mother’s bed in a Kyiv hospice.

To ensure the oxygen concentrator’s battery would last during the interminable outages at home, the family had to reduce the amount of oxygen it provided.

“For my mom, it was total torture,” Venglinska said.

The battery would last up to eight hours, which left the family in a constant state of anxiety.

“(My husband) was afraid to enter her room every time, he didn’t know if my mom was alive… or if she had suffocated,” Venglinska said.

On the night of December 17, the outage lasted more than 10 hours, longer than usual.

With all power sources exhausted and 40 minutes left on the respirator’s battery, Tetyana called a private ambulance to hospitalise her mother.

The decision was a life-saver: Venglinska’s home was without power for the next four days.

“She would have died for sure,” Venglinska said.

Since then, Eva has spent most of her time at the clinic, tending to her bedridden mother.

Her husband remained in their flat, where he is taking care of her 85-year-old father.

“I want to go home as soon as possible,” Venglinska said. “Our family is separated.”

Back in the Mozgovy home, Lyudmyla is also hoping for better days.

“We will definitely drink to victory… Valentyn will do it his way, through a straw, and I’ll pour myself one.”