US soldiers arrive at Bagram Air Base in Afghanistan in March 2002 as US-backed Afghan forces had seized key terrain and taken Taliban and al-Qaeda fighters prisoner in the early months of the "war on terror". — © AFP
Didier LAURAS

Twenty years ago, US president George W. Bush declared a “war on terror”. Today, its failure is undeniable, with jihadist groups both more numerous and scattered more widely across the world.

Bush launched the war on terror after the September 11, 2001 attacks in New York and Washington which were plotted from Afghanistan by Al-Qaeda leader Osama bin Laden, who was sheltered by the Taliban regime of the time.

The US-led invasion of Afghanistan toppled the Taliban and degraded the capabilities of Al-Qaeda, but it did nothing to eradicate the causes of violent Islamic extremism at its roots, analysts say.

“They managed to kill Bin Laden,” said Abdul Sayed, a researcher on jihadism based at Lund University in Sweden, referring to the killing of the Al-Qaeda chief by US special forces in Pakistan in 2011. 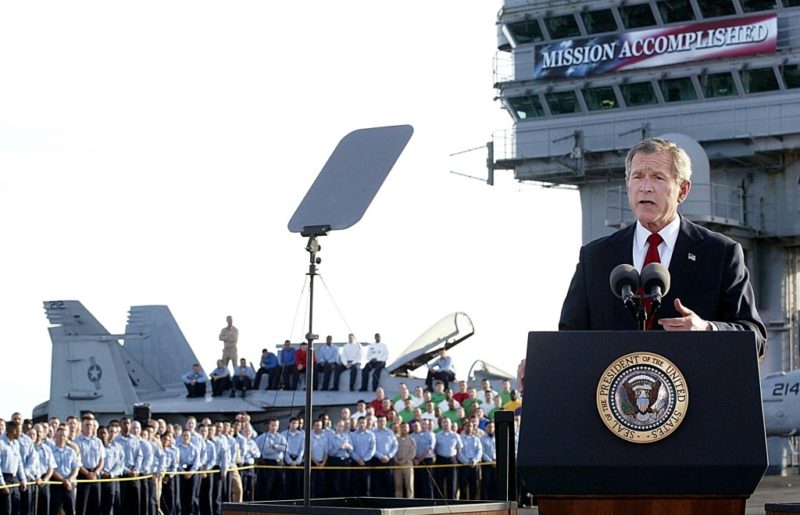 US President George W. Bush addresses the nation aboard the nuclear aircraft carrier USS Abraham Lincoln in May 2003, declaring a “mission accomplished” in Iraq, despite many years of fighting that followed. — © AFP

“But if the goal was to end transnational jihadism, then it’s a total failure,” he said.

Today, jihadist terrorism has transformed into a more global threat, posed by disparate groups and individuals around the world.

Though the United States, and the broader Western world, has seen no attack on the scale of 9/11 in subsequent years, analysts say that should not be used to claim the “war on terror” has been a success.

“The objectives that it set for itself were unachievable. Terrorism cannot be defeated. The threat is constantly evolving,” said Assaf Moghadam, senior researcher at the International Institute for Counter-Terrorism in Israel.

The Washington-based Center for Strategic and International Studies (CSIS) estimated in 2018 that the number of active terror groups was 67, its highest level since 1980.

A watershed event was the emergence of the Islamic State group in Iraq and Syria which was hostile to Al-Qaeda and whose influence grew as that of the bin Laden network waned following his death. 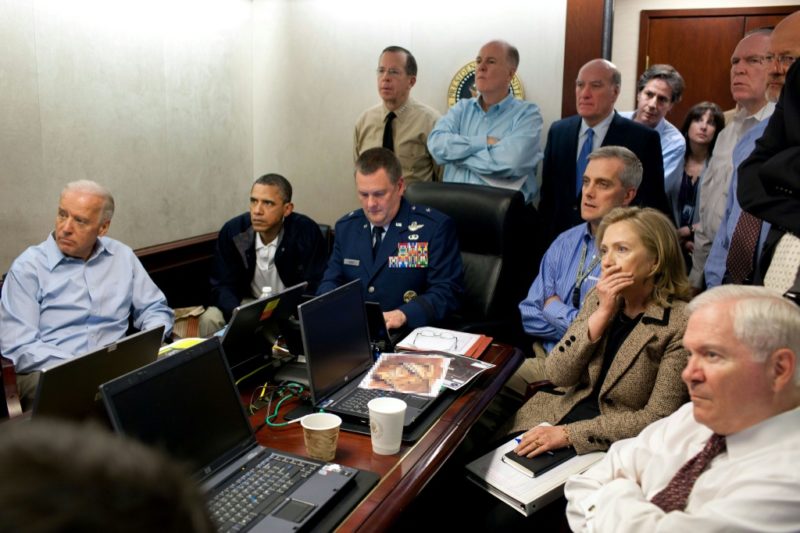 This official White House photo shows then-president Barack Obama, vice president Joe Biden, defense secretary Robert Gates and secretary of state Hillary Clinton and others as they receive an update on the mission against Osama bin Laden in May 2011. — © AFP

Given the vast resources devoted to it, the outcome of the war on terror has been disastrous, partly due to factors seen by some as major errors, notably the 2003 US-led invasion of Iraq that ousted Saddam Hussein.

“It did allow AQ (Al-Qaeda) to resurrect itself, which laid the ground for the Islamic State to emerge,” said Seth Jones, director of the international security program at CSIS.

“Conflicts like the one in Syria can radicalise and mobilise thousands of militants in a short time period and there is little the outside world can do about it,” said Tore Hamming, a fellow at the International Centre for the Study of Radicalisation.

“Arguably the biggest problem is not military,” Hamming said. “One of the strongest mechanisms to prevent recruitment to Islamic militancy is providing people better alternatives. Weapons do not do that.”

The nature of the threat has transformed since 9/11 when jihadist terror essentially meant Al-Qaeda under the charismatic leadership of bin Laden. But then IS emerged and various branches pledging allegiance to IS or Al-Qaeda.

The geographic spread of the jihadist threat has also changed. The groups were limited to the Middle East but they are now also common throughout Africa, most of the Arab world as well as in South and Southeast Asia.

The links between these jihadist groups are loose, their relations with their leaderships often weak. And local grievances usually prevail over international ambitions. 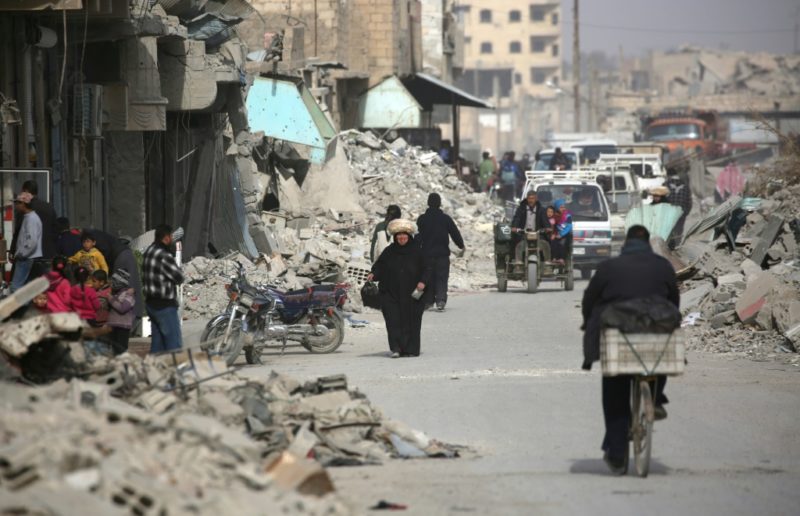 Syrians walk amidst destroyed buildings in Raqa in January 2018 after a huge military ground operation by Kurdish fighters and in the air by US warplanes defeated jihadists from the Islamic State group but left the city completely disfigured. — © AFP

According to Moghadam, some terror figures have now “become serious political actors”.

“You’re not just talking about a small number of people that we can put on the terrorism watchlist.”

“The threat has metastasised. You have a greater number of regimes in geographically dispersed places facing challenges of violent extremism.”

Africa has become the new battleground for jihadism in the Sahel region and Maghreb, Somalia and Libya, Mozambique and the Democratic Republic of Congo.

“It is very clear it has moved from the Middle East to Africa and I don’t think it was anticipated,” said Brenda Githing’u, a Johannesburg-based counter-terrorism expert.

“It’s a failure in forecasting the emergence of a new battleground and in considering the potential Africa has in terms of a new jihad,” she added.

But times have changed for the West as well.

While in 2001 it was clear that terrorism was enemy number one of the United States and its allies, tensions have since grown with Iran, Russia and above all China.

“The US has shifted its priorities from countering terrorist groups overseas to dealing with the Chinese first, then the Russians and the Iranians,” said Seth Jones. 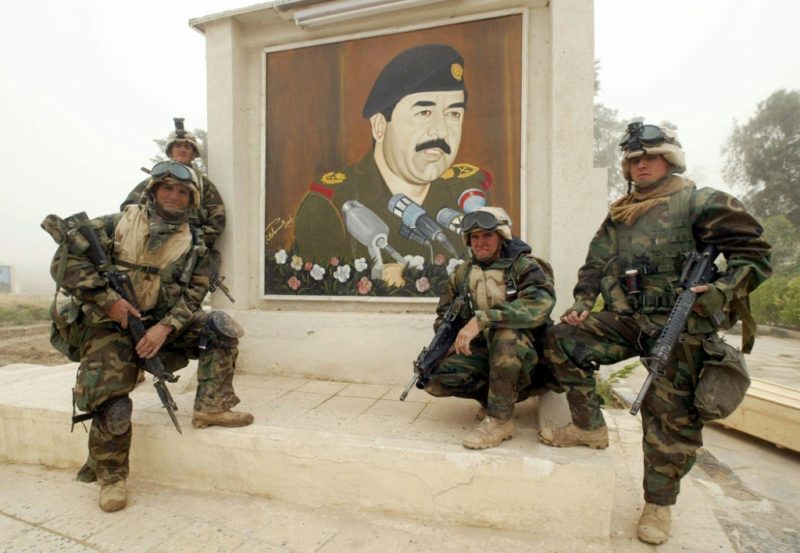 Marines from the 2nd Battalion, 8th Regiment pose next to a mural of Iraqi president Saddam Hussein found after taking control of a hospital allegedly used for military purposes by Iraqi forces near the Iraqi city of Nasiriyah in March 2003. — © AFP

“There is a huge debate in the US intelligence community about whether there should continue to be a shift away from countering terrorism, both collecting intelligence and targeting strikes, against AQ and IS.”

Neither Al-Qaeda nor IS may have the means to stage attacks in the West in the near future like those against Paris on November 13, 2015 that were claimed by IS.

But the police and intelligence services are faced with so-called “lone wolves” and other isolated militants, often from the country they strike, radicalised on the internet and who kill blindly, in the name of a jihadist group, with a knife, a gun or a vehicle.

And the future threat may not always come from Islamist radicals drawing inspiration from the Middle East but from extreme right-wingers and white supremacists who look no further than the West.

“Tackling right-wing extremism is likely going to be an even greater challenge for the United States because there are significant pockets of support,” said Moghadam.

“There is a certain degree of tolerance and sympathy in the West to the ideas.”

In this article:Americans, George W. Bush, Joe Biden, Us military, War on Terror