Digital Journal — When we announced a new feature to DigitalJournal.com, where established writers would be granted citizen-journalism status and new writers could vie for it, we expected a jump in journalistic quality. Undoubtedly, the members pulled through by turning the past seven days into pure reading pleasure.

Let’s get the overview rolling with a quick survey of the lighter fare which made its mark on our readership. In what could be the damage-control story of the week, Thespian reported on Sony apologizing for promoting an upcoming video game with a party featuring a decapitated goat and topless women. What happened to press kits and media copies?

Just when we thought TV was getting good — The Office should have its own channel — skyangel5402 wonderfully spoiled the party by imploring us to turn off the boob tube. It can get addictive and even physically unhealthy: one study found that people consume 74 per cent more calories when they watch TV. Prime time has never made me feel fatter. 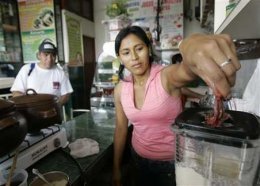 As Brandigal reported, Peru is the home of frog juice, which should make Kermit shiver in his leggings

Speaking of food, Brandigal gave us some international cuisine news with her quirky headline Let’s All Have a Tall Refreshing Glass of Frog Juice. Popular in Peru, this acquired-taste drink can supposedly cure asthma and a low sex drive. Drinking frogs to increase libido? And I thought eating oysters was too difficult to digest.

A frog isn’t the only animal acting as a natural Viagra. patxxoo reported on a dangerous spider known to super-charge guys with massive erections that last for hours. I feel sorry for the victims’ wives.

The sex articles continued this week with momentsintime giving us a glimpse into sex-vertising — provocative marketing campaigns heavy on cleavage and low on subtlety. Right-winger seems to be a fan, albeit a crude one: “Just show me…a nice juicy ass doused in baby oil!” Um, not sure baby-oil advertisers want to go that route.

And finally in the sexual-healing category, we learned how having an affair can turn one of the richest men in the world to one of the most disgraced. malan reported on BP magnate John Browne who lost a court battle with a British tabloid about his sexual relationship with a Toronto man. A homosexual oil baron? I’m betting Hollywood will be sniffing around to nab the movie right to this juicy tale.

Turning to less sexual matters, GotTheScoop delivered the goods with insight into the history of placebo pills and the implications of treating patients with “fake” medication. The piece was well-researched and it impressed us by including numerous studies to back up the argument. Well done, GTS!

Also worth a second mention is cgull‘s illuminating story on a woman denied a teaching degree because of a MySpace photo that showed her chugging back some brew. The dean of the school accused her of promoting underage drinking. The story might’ve flown under the radar if it didn’t raise timely questions on online privacy, grounds of dismissal and MySpace as a shaky job reference. What’s next, civil servants banned from Facebook? Oh yeah, that already happened.

On the tech front, cgull was a busy citizen journalist this week with his breaking story on Microsoft supposedly courting Yahoo for a $50 billion US buyout. It left some members aghast at the outcome — GTS commented, “Kind of scary thought that then there will basically be only 2 companies controlling the Web…Will eventually Google and Microsoft join forces and basically rule over us all?”

A buried story deserving of more up-votes is Ringwraith‘s thorough piece on the Nokia N95 GPS phone. Detailing the phone’s features without sounding too praise-worthy, the writing carried an authoritative tone ideal for a preview of what phone lovers can expect. Then again, as HockeyGirl found out, are GPS systems just sneaky electronic spies?

Sparking intense debate was Bocephalus‘s mid-week post on a CNN host insinuating Muslims should be rounded up in concentration camps. Some comments were almost as long as the article, which is another sign that members are providing the site with intelligent discussion points. Maybe we should start our own Bill Maher-type panel show.

Turning to one of the biggest online stories of the week, saran81kid91 was the first to report on Digg.com’s user revolt in light of a leaked HD-DVD hex code the Digg editors attempted to censor (but they later reneged, siding with their members). It was fascinating to read saran’s updates on this very contentious situation, which has implications for all user-powered sites. But it might be hyperbole when Wikipedia wrote, “May 1 was the day that Digg died.” Actually, May 1 was the day Digg execs were interviewed by too many media outlets to name (but I’ll try: CNN, New York Times, Fortune, Wired News, BusinessWeek, PC World…phew, I’m tired).

Since there are lots of TopFinds Awards to bestow upon several gifted citizen journalists, let’s get right to the prestigious honours.

This week, veteran DJ members were fortunate to be joined by top-notch rookies looking to spread their writing prowess across the site. We welcome talented freshmen pennyroyalest, pbrite and melodicdream. If we had to single out one writer who deserves the New DJ User of the Week Award, it would have to be the oddly named Left-Handed Elephant. A self-described political junkie, Left brought us insightful news about the search for a U.S. “war czar,” the Army’s problem with soldier retention and probing analysis of both the Republican and Democrat Presidential debates. He writes more than he comments, which may explain his dedication to getting his facts right and injecting thoughtful opinion into every post. We look forward to more political write-ups, Left!

What kind of award do we bestow upon a 2,000-word article bursting with chin-stroking ideas and excellent supporting evidence? Look no further than the TopJournalism Award, presented to franklin for her investigative post on the medicine regulatory process. Nicely divided with sub-heads, the article provided insight into pharmaceutical malpractice and companies that knowingly include adulterated drugs in their supply. franklin not only castigated the FDA and other regulatory bodies but offered suggestions for widespread improvement. That’s the kind of well-informed journalism we like to see on DigitalJournal.com.

And finally, we’re bringing back the TopHeadline Award to a very worthy winner: How Many Global Warming Enthusiasts Does It Take to Screw in a Compact Fluorescent Lightbulb? Lady Justice, I couldn’t care less about the answer, because I was laughing too hard when I read this cracker of a headline. Keep up the humour, DigitalJournalists.

Most important, keep up the good work, folks. Every week we’re amazed at the variety of articles published on the site. Every week we look forward to honouring the posts worthy of a second read. And next week, as expected, more intriguing articles will earn their place in the hallowed halls of TopFinds.