The Knoxville News-Sentinel reports that at an afternoon news conference, Sevier County Mayor Larry Waters, referring to the three people who had lost their lives, said, “We do not have further information on them at this time. We do not have identifications. We are working to identify those folks now.”

The mayor did say that the three deaths were in separate incidents and locations. He added that officials don’t know at this time if there are any more victims. “We have not been able to get into all of the areas,” Waters said. “We pray that we don’t experience any more fatalities.” 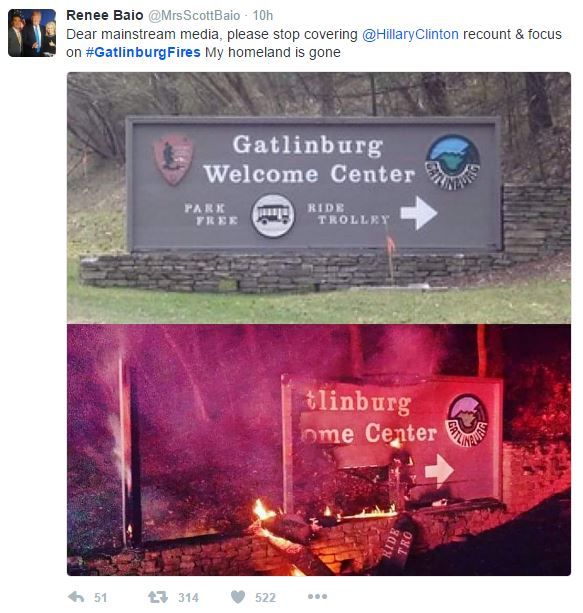 Officials say that 14 people have been hospitalized, three in critical condition with burns at Vanderbilt University Medical Center in Nashville. CNN is reporting that National Park Service spokeswoman Dana Soehn said the fire on Monday that sparked the 14 wildfires was “human-caused.” She added the blaze is under investigation but did not elaborate.

The National Park Service says that over 15,000 acres have been burned and over 250 structures have been damaged in Gatlinburg and Pigeon Forge, two communities considered to be the gateways to the Great Smoky Mountains National Park.

A 6:00 p.m. to 6:00 a.m. curfew have been imposed and officials do not know at this time when people will be allowed to return to the areas impacted by the fires. Fire officials are still trying to evaluate the destruction caused by the fires that rapidly spread with little or no warning. 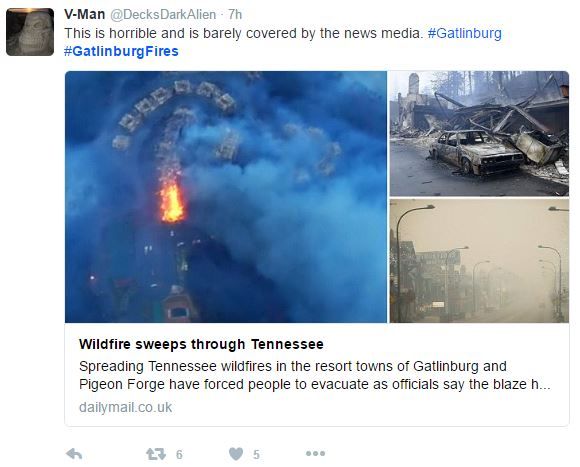 NBC News is reporting the forecast for tonight and into Wednesday afternoon doesn’t look promising as forecasters are predicting lightning and winds up to 60 mph. Gatlinburg Mayor Mike Werner called the forecast “ominous,” adding: “We may spend this evening fighting more fire.”