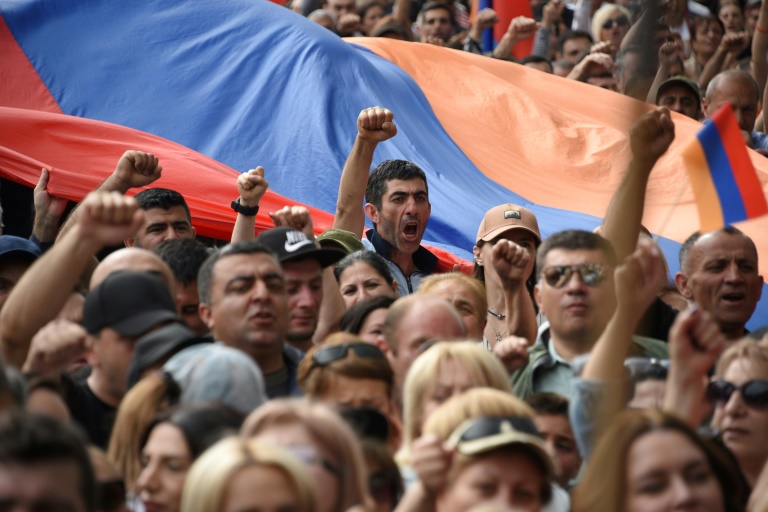 Thousands of opposition supporters rallied Sunday in the Armenian capital Yerevan to warn the government against concessions to arch-foe Azerbaijan over the long-disputed Nagorno-Karabakh region.

Opposition parties have accused Prime Minister Nikol Pashinyan of plans to give away all of Karabakh to Azerbaijan after he told lawmakers last month that the “international community calls on Armenia to scale down demands on Karabakh.”

Protesters shouted demands for Pashinyan to resign, with many holding placards that read “Karabakh”.

Parliament Vice Speaker and opposition leader Ishkhan Sagatelyan said: “Any political status of Karabakh within Azerbaijan is unacceptable to us.”

“Pashinyan had betrayed people’s trust and must go,” he told journalists at the rally, adding that the protest movement “will lead to the overthrow of the government in the nearest future”.

Addressing the crowd, he announced “a large scale campaign of civil disobedience to begin on Monday”.

“I call on everyone to begin strikes. I call on students not to attend classes. Traffic will be fully blocked in central Yerevan.”

On Saturday, Armenia’s National Security Service warned of “a real threat of mass unrest in the country.”

Yerevan and Baku had been locked in a territorial dispute since the 1990s over the mountainous region of Azerbaijan predominantly populated by ethnic Armenians.

Karabakh was at the centre of a six-week war in 2020 that claimed more than 6,500 lives before it ended with a Russian-brokered ceasefire agreement.

Under the deal, Armenia ceded swathes of territories it had controlled for decades and Russia deployed some 2,000 peacekeepers to oversee the truce.

In April, Pashinyan and Azerbaijani President Ilham Aliyev met for rare EU-mediated talks in Brussels after which they tasked their foreign ministers to “begin preparatory work for peace talks.”

The meeting came after a flare-up in Karabakh on March 25 that saw Azerbaijan capture a strategic village in the area under the Russian peacekeepers’ responsibility, killing three separatist troops.

Baku tabled in mid-March its set of framework proposals for the peace agreement that includes both sides’ mutual recognition of territorial integrity, meaning Yerevan should agree on Karabakh being part of Azerbaijan.

Armenian Foreign Minister Ararat Mirzoyan sparked controversy at home when he said — commenting on the Azerbaijani proposal — that for Yerevan “the Nagorno-Karabakh conflict is not a territorial issue, but a matter of rights” of the local ethnic-Armenian population.

Ethnic Armenian separatists in Nagorno-Karabakh broke away from Azerbaijan when the Soviet Union collapsed in 1991. The ensuing conflicts claimed around 30,000 lives.