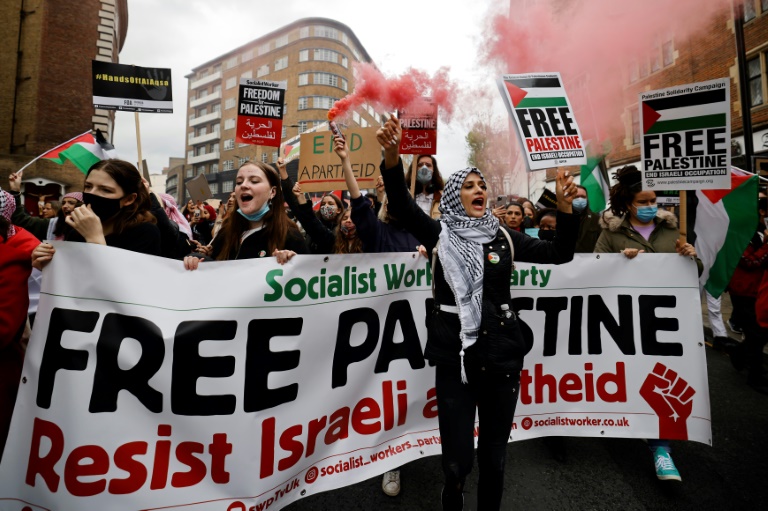 Thousands of protesters marched in support of Palestinians on Saturday in major European cities including London, Berlin, Madrid and Paris, as the worst violence in years raged between Israel and militants in Gaza.

Packed crowds stretched all along Kensington’s High Street where the embassy is located.

Organisers claimed as many as 100,000 people had gathered for the demonstration though London police said they were unable to confirm any figure.

“The group is spread across a large area which makes it impossible to count them,” a Metropolitan Police spokesman said.

“Officers are engaging with a group of people who have gathered for a demonstration in central London this afternoon,” the police said in a separate statement, adding that a plan was in place to curb the spread of Covid-19.

“This time is different. This time we will not be denied any more. We are united. We have had enough of oppression,” Palestinian Ambassador Husam Zomlot told the demonstrators.

“Today we are saying enough, enough with the complicity,” he added.

Simon Makepace, a 61-year-old accountant told AFP he had joined the protests because “the whole world should be doing something about it, including this country”.

He was critical of the United States, which he said was unfairly backing Israel, and urged Washington to “make peace and stop what’s happening”.

Azadeh Pyman, a 50-year-old scientist said she had been raised on the Palestinian cause by her parents and grandparents.

“I’m not Palestinian originally but my heart bleeds for Palestinians,” she said. “I think it’s the cause that will go from one generation to another generation, until Palestine is free.”

In Madrid, some 2,500 people, many of them young people wrapped in Palestinian flags, marched to the Puerta del Sol plaza in the city centre.

“This is not a war, it’s genocide,” they chanted.

“They are massacring us,” said Amira Sheikh-Ali, a 37-year-old of Palestinian origin.

“We’re in a situation when the Nakba is continuing in the middle of the 21st century,” she said, referring to the “catastrophe”, a word used by Palestinians to describe Israel’s creation in 1948 when hundreds of thousands fled or were driven out.

“We want to ask Spain and the European authorities not to collaborate with Israel, because with their silence, they are collaborating,” said Ikhlass Abousousiane, a 25-year-old nurse of Moroccan origin.

The marches came amid the worst Israeli-Palestinian violence since a 2014 war in Gaza.

Thousands marched in Berlin and other German cities following a call by the Samidoun collective.

The protesters shouted “Boycott Israel” and threw paving stones and bottles at the police, leading to several arrests.

Other protests were held in Frankfurt, Leipzig and Hamburg.

On Tuesday, Israeli flags were burnt in front of two synagogues in Bonn and Muenster.

Police officers used tear gas and water cannon in Paris to try and disperse a pro-Palestinian rally held despite a ban by authorities.

Some threw stones or tried to set up roadblocks with construction barriers, but for the most part police pursued groups across the district while preventing any march toward the Place de la Bastille as planned.

“You want to prohibit me from showing solidarity with my people, even as my village is being bombed?” Mohammed, 23 and wearing a “Free Palestine” t-shirt, told AFP.

The march was banned Thursday over concerns of a repeat of fierce clashes that erupted at a similar Paris march during the last war in 2014, when protesters took aim at synagogues and other Israeli and Jewish targets.

No incidents were reported as thousands of people gathered for protests and marches in several other cities including Montpellier, Toulouse and Bordeaux.

Around 500 people rallied in Athens, AFP correspondents said. Greek police used water cannon and there were minor scuffles with protesters in front of the Israeli embassy.

Israel is fighting Hamas militants in Gaza while trying to  contain an outbreak of internal Jewish-Arab clashes and violence in the West Bank.

That was in response to bloody Israeli police action at the flashpoint Al-Aqsa mosque compound in Jerusalem, as well as a crackdown on protests against the planned Israeli expulsion of Palestinians from their homes in the Sheikh Jarrah neighbourhood in annexed east Jerusalem.

Since Monday, Israeli air and artillery strikes on Gaza have killed 139 people including 39 children, and wounded 1,000 more, health officials say.

Palestinian armed groups have fired hundreds of rockets at Israel since, killing 10 people, including a child and a soldier. More than 560 Israelis have been wounded.