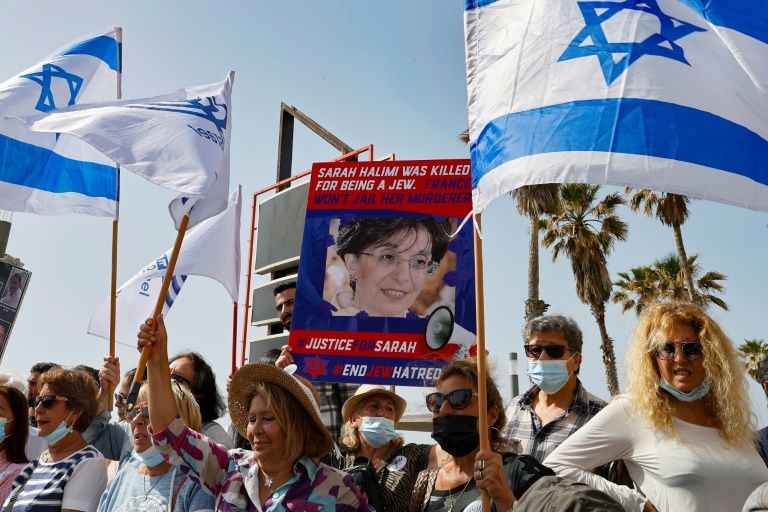 Thousands of protesters gathered in several French cities and Israel on Sunday to denounce a court’s refusal of a trial for a man who killed a 65-year-old Jewish woman, after experts determined he acted in a “delirious fit” due to heavy marijuana use.

The decision infuriated the victim’s family as well as Jewish groups, and prompted President Emmanuel Macron to urge a change in French law to ensure people face responsibility for violent crimes while under the influence of drugs.

Sarah Halimi was pushed out the window of her Paris flat by neighbour Kobili Traore, 27, who shouted “Allahu Akbar” (God is greatest).

The country’s highest court said this month that while the murder was anti-Semitic, Traore could not be held criminally responsible since he had acted in a state of dementia.

He has been in psychiatric care since Halimi’s death.

“The clamour has risen and hope has returned. That hope is all of you here,” Halimi’s brother William Attal told a crowd of several thousand at the Trocadero esplanade in Paris.

The MP who leads Macron’s Republic on the Move party, Christophe Castaner, addressed the protest, which was also attended by opposition leaders and by several well-known actors.

Former French first lady Carla Bruni, wife of Nicolas Sarkozy, also appeared at the Paris rally, as did Mayor Anne Hidalgo, who said the city would soon name a street in Halimi’s memory.

“It will also be a way of doing her justice,” Hidalgo said.

Justice Minister Eric Dupond-Moretti confirmed Sunday that a new penal responsibility law would be presented by end May to fill a “legal void”.

But France’s CSM judiciary council rejected the government’s “disparagement” on Sunday and insisted that judges had correctly applied the law in a “painful” case.

More than 20,000 people demonstrated in Paris, and up to 2,000 took part in a march in the Mediterranean city of Marseille, police said, while around 600 gathered outside a synagogue in the eastern city of Strasbourg.

In Israel, hundreds of people gathered outside the French embassy in Tel Aviv, waving French and Israeli flags and placards with slogans such as “Shame on France”.

“I am ashamed to be French, the France of my childhood no longer exists,” said Roselyne Mimouni, a Franco-Israeli retiree.

“I am appalled that a Jewish woman was murdered in France because she was Jewish,” she added.

“From Tel Aviv to Paris, the Jewish people, in Israel and the entire world, stand in solidarity with the Halimi family and the Jewish community of France,” she said.

Jewish groups say the court ruling has made Jews less safe in France, while lawyers representing Halimi’s family have said they will take the case to the European Court of Human Rights.

French Jews have been repeatedly targeted by jihadists in recent years, most notably in 2012, when an Islamist gunman shot dead three children and a teacher at a Jewish school in the southern city of Toulouse.

In 2015, a pro-Islamic State radical gunned down four people at a Jewish supermarket in Paris.