The scientists studied one of the many “ice tongues” of the Nioghalvfjerdsfjorden Glacier – also known as the 79° North Glacier – in northeast Greenland. An ice tongue is a strip of ice that floats on the water extending out from the glacier on land. The ice tongue of the 79 North Glacier researchers studied is nearly 50 miles (80.5 kilometers) long. 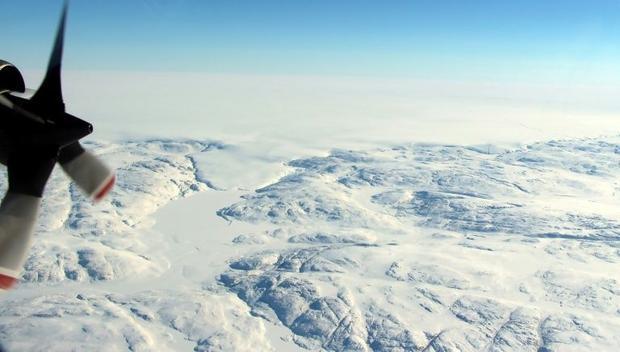 Ice sheets in Greenland and the Antarctic have shed more than 430 billion tonnes per year in the last 10 years
John SONNTAG, NASA/AFP/File

The large glacier is located in King Frederick VIII Land, in northeastern Greenland. It drains an area of 103,314 square kilometers (39,890 square miles) of the Greenland Ice Sheet. Over the past 20 years, the glacier’s ice tongue has experienced a dramatic loss of mass and thickness, because it’s been melting not just on the surface, but also and especially from below.

The scientists used bathymetry data to measure water temperatures near the ocean floor, reports CTV News Canada. The data revealed a massive two-kilometer-wide (more than a mile wide) underwater current from the bottom of which comparatively warm water from the Atlantic is channeled directly toward the glacier.

Thanks to this warm water mass, large amounts of heat from the ocean flow past the tongue every second, melting it from beneath. Additionally, the warm water mass has grown larger – extending 15 meters (49 feet) higher than it did just a few years ago.

“The reason for the intensified melting is now clear,” said Janin Schaffer, an oceanographer from the Alfred Wegener Institute in Germany who led the team of researchers, in a release about the findings, reports SciTech Daily.

To find out if the warm water current was just an anomaly, the researchers also investigated a neighboring region on Greenland’s eastern coast, where another glacier, the Zachariæ Isstrøm also juts out into the sea, and where a large ice tongue has recently broken off.

According to Schaffer: “The readings indicate that here, too, a bathymetric sill near the seafloor accelerates warm water toward the glacier. Apparently, the intensive melting on the underside of the ice at several sites throughout Greenland is largely produced by the form of the seafloor.”