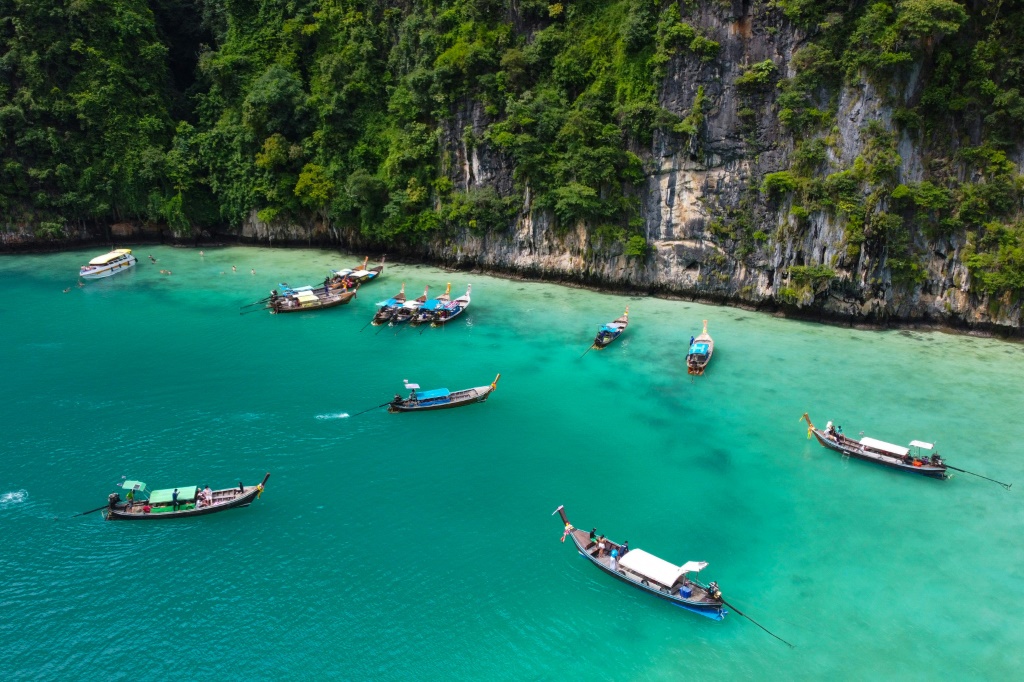 While travel stopped and the world locked down, in the dazzling blue waters of Thailand’s idyllic Phi Phi islands, a gentle renaissance was under way.

Mass tourism had brought the archipelago, immortalised in Leonardo DiCaprio movie “The Beach”, to the brink of ecological catastrophe.

Now Thailand hopes to make Phi Phi the standard-bearer for a new, more sustainable model of tourism as the country reopens to visitors after the long covid shutdown.

Near a coral islet just a few kilometres from Maya Bay — the iconic cove surrounded by towering tree-clad cliffs that was home to the beach paradise of the DiCaprio film — marine biologist Kullawit Limchularat dives through eight metres of crystalline water and carefully releases a young bamboo shark.

His mission: to repopulate the reefs after years of damage caused by uncontrolled visitor numbers, a crisis that got so bad the authorities were forced to close Maya Bay itself in 2018. 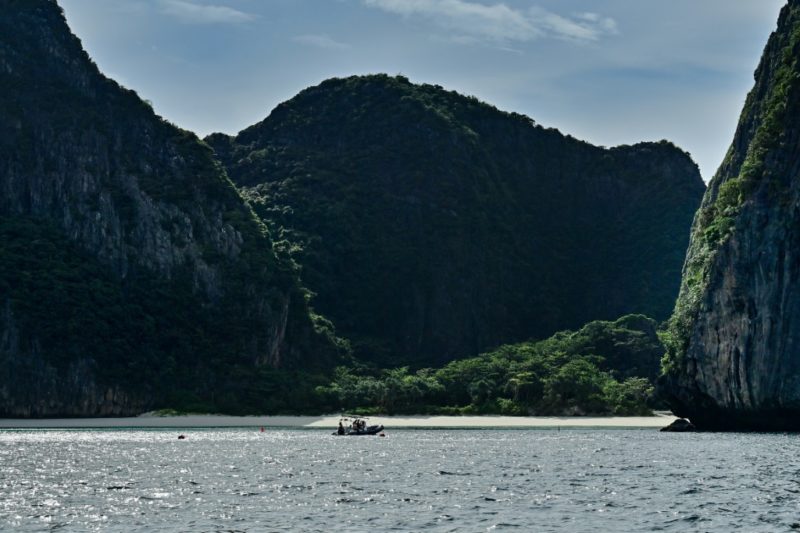 Until it was closed due to the pandemic, Maya Bay’s dazzling beauty and Hollywood fame drew up to 6,000 people a day to its narrow 250-metre long beach/. — © AFP

But after being raised in captivity they are reluctant to swim out among the clown fish, barracudas and turtles.

“They need time to adapt. We waited until they reached 30 centimetres to maximise their chance of survival,” says Kullawit, who is working on the project with the Phuket Marine Biological Center.

“The aim is that once they are adults, they will stay and breed here to help repopulate the species.”

Until it was closed, Maya Bay’s dazzling beauty and Hollywood fame drew up to 6,000 people a day to its narrow 250-metre long beach.

Inevitably, so many people arriving in noisy, polluting motorboats with so little control over numbers had a huge impact on the area’s delicate ecology.

“The coral cover has decreased by more than 60 percent in just over 10 years,” says Thon Thamrongnawasawat of Kasetsart University in Bangkok.

As early as 2018, Thon raised the alarm and pushed the authorities to close part of the bay. 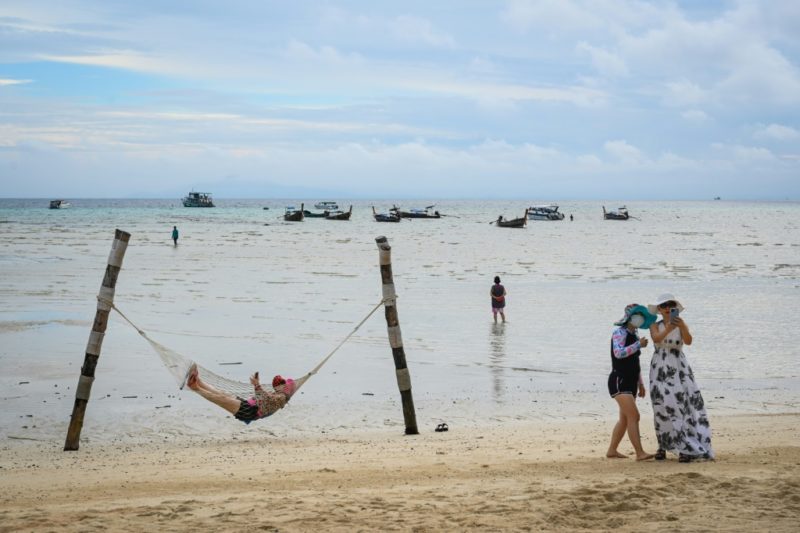 Then the pandemic hit and visitor numbers dwindled to virtually nil as Thailand imposed tough travel rules, putting the entire archipelago into a forced convalescence.

As a result, dozens of blacktip sharks, green turtles and hawksbill turtles have returned.

And whale sharks, the world’s largest fish and listed as endangered by the International Union for Conservation of Nature (IUCN), have been spotted off the coast.

“Everything suggests that there is more reproduction, especially among sharks, which particularly appreciate calm waters,” says Thon.

As for the corals, “more than 40 percent of the fragments replanted in Maya Bay have survived, a very satisfactory figure obtained thanks to the absence of visitors”.

But recovery will be slow: at least two decades will be needed to restore the coral reef, Thon warns.

Phi Phi is slowly resuming tourism, still mostly local for now, but foreigners are returning as Thailand eases its draconian rules for visitors, and Maya Bay is due to reopen on January 1. 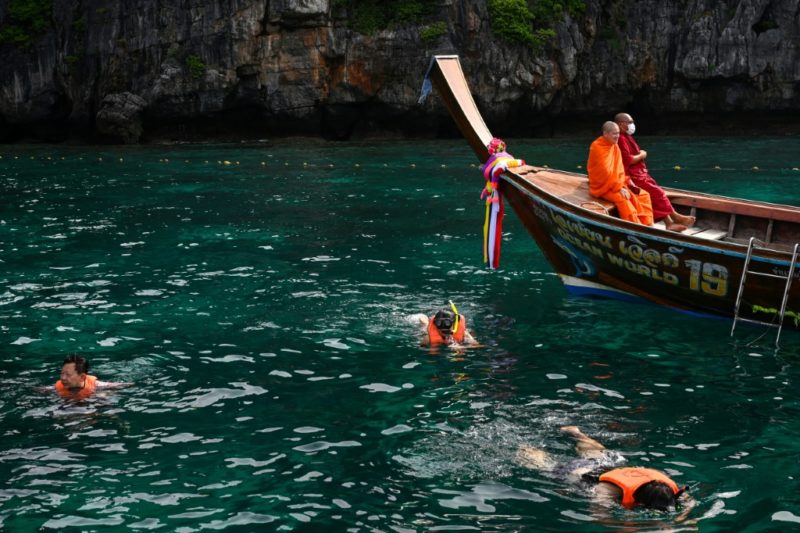 The number of visitors will be regulated on key sites of the archipelago, while boats anchoring on reefs and tourists feeding fish face $150 fines. — © AFP

The government has said it wants to move on from Thailand’s history of hedonistic mass tourism, with Tourism Minister Phiphat Ratchakitprakarn saying the focus would be on “high-end travellers, rather than a large number of visitors”.

On Phi Phi, national park chief Pramote Kaewnam insists the mistakes of the past will not be repeated.

Boats will no longer be allowed to moor near the beach and will instead drop tourists off at a jetty away from the cove. Tours will be limited to one hour, with a maximum of 300 people per tour.

“Maya Bay used to bring in up to $60,000 a day, but this huge income cannot be compared to the natural resources we have lost,” Pramote said. 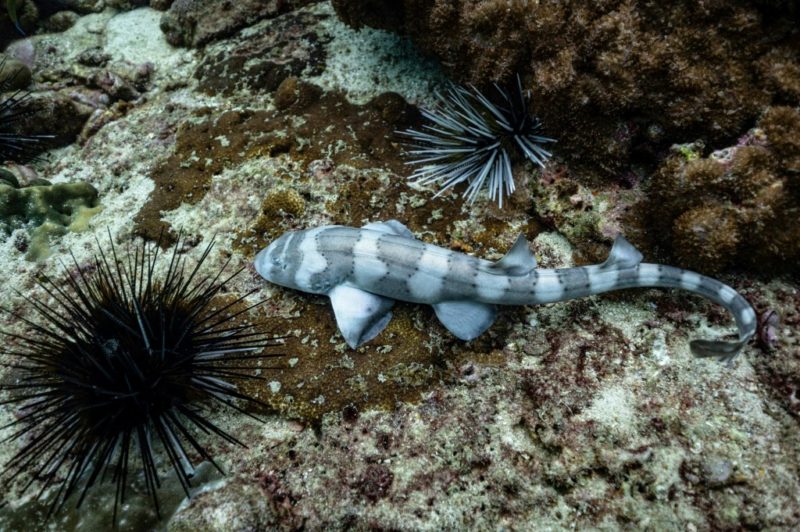 Marine biologists are trying to repopulate the reefs after years of damage caused by uncontrolled visitor numbers.— © AFP

The number of visitors will be regulated on other key sites of the archipelago, while boats anchoring on reefs and tourists feeding fish face $150 fines.

Some of the first foreign visitors to return to the area are happy with the new more exclusive approach.

“We didn’t just come to dive in the turquoise water. We also want to help,” says Franck, a visitor who has just arrived from Paris.

“It would be fantastic if the island stayed this quiet.”

Local businesses face the challenge of adapting to the new model. For some, the change is welcome.

“We need the revenue from tourism, but we also need to educate them to be good tourists. We all understood that with the pandemic,” says Sirithon Thamrongnawasawat, Singha Estate Vice President for Sustainability and Development.

Singha Estate, which owns a 200-room hotel on the island and has built a marine centre dedicated to the archipelago’s ecosystem, is financing several projects, including the replanting of coral and the breeding of bamboo sharks and clown fish.

But the enthusiasm is not shared by all 2,500 inhabitants of the archipelago, many of whom have built livelihoods around tourism and hope to see visitors return soon.

Pailin Naowabutr has been plying the waters of the archipelago for seven years, ferrying tourists on his longtail boat.

He gazes wistfully across the sea towards Phuket, Phi Phi’s much larger neighbour which used to welcome millions of tourists.

“They will soon come back, everyone wants to visit Phi Phi,” he says.

But the Omicron Covid variant, which has led some countries to reintroduce travel restrictions, could ruin his hopes — and give the islands’ wildlife a little more time to recover.