I taught English in Russia, Turkey, and Communist China for the last five years. Many Americans consider these dangerous places to live. However, terrorists struck my own home area of San Bernardino, California just three weeks after I returned to the U.S.A.

I had driven down and up Waterman Avenue for 13 years, from forested Lake Arrowhead in the mountains and through the city of San Bernardino. I drove down Waterman Avenue many times in the last three weeks. I could have been in the area during the shooting at a county building’s Christmas-decorated holiday party. This thought hit me hard. Then I received a text message from my pastor, Kathleen Dowell, saying that a fellow Shiloh Messianic Congregation member, Nick Thalasinos (52), was among the 14 killed, leaving his wife Jennifer a widow. Later, Pastor Kathleen and her husband Pastor Bruce informed me that Nick was probably the primary target because of his views regarding Israel. Nick’s wife Jennifer added that he had received a death threat on Facebook.

Still reeling from the constant television coverage of the San Bernardino terrorist attack, I attended a memorial service for Nick and the 13 other people who were shot (some as many as five times). Shiloh Messianic Congregation of San Bernardino County hosted this event last Saturday, December 5. I arrived late and was surprised at how many cars filled the parking lot outside the auditorium. Jews and non-Jews who believe that Jesus is the Messiah fellowshipped together as visitors watched. Pastor Bruce Dowell issued warnings about more possible attacks to the congregation.

“People like Syed Farook and Tashfeen Malik have sold themselves into violent religious extremism,” Pastor Bruce declared. “They can pretend to be your friends. In fact, Syed worked close to Nick’s desk, and they often talked to each other. The county health inspector’s office workers even held a baby shower for Syed and Tashfeen, to welcome their daughter 6 months ago. You can give these people presents, and they can smile at you and accept them. They may debate a little about religion with you in a polite way. Later, they can come shoot you in cold blood and believe they are doing God a service, just like Jesus said.”

Syed was an American citizen whose father Syed emigrated from Pakistan. Syed senior said his son supported ISIS ideas of establishing an Islamic caliphate and “hated Israel.” Seed’s mother, with whom the couple lived, had shooting targets in her car and is associated with an extremist organisation. Tashfeen was a Pakistani woman with terrorist ties, newly come to America. The couple were radicalized before they even began dating. On December 2, Syed arrived at the country holiday party early and sat with his fellow employees, talking and smiling a little. As survivor Patrick Baccari recounted, Syed was suddenly gone from the room. He asked, “Where’s Syed?”

A few minutes later, Syed returned with his wife Tashfeen, dressed all in black (including a mask), wearing body armor, and sporting long, semi-automatic rifles and handguns. They blasted the conference room with at least 75 rounds of ammunition and then left in a rented black SUV, leaving behind bombs that were rigged to explode on the first responders (a common tactic from the Middle East). After a police chase and shootout, Syed and Tashfeen were killed. When police broke into their apartment, they found thousands of rounds of ammunition, pipe bombs, Islamist literature, destroyed cell phones and computers, and tools for making bombs.

The FBI believes the terrorist attack was planned well in advance, and there were probably other intended targets. A neighbor noticed a lot of young, Middle-Eastern men coming to meetings inside Syed and Tashfeen’s apartment but said nothing for fear of being considered racist. Syed and Tashfeen even did target practice at a local shooting range a few days before their attack. The FBI is investigating a money trail and their gun supplier, a Muslim convert, who was related to them by marriage.

“Don’t misunderstand me,” Pastor Bruce continued during the eulogy for Nick last Saturday. “Most Muslims do not want to shoot people or blow them up. But those who have been radicalized are absolutely dangerous, and we are all their possible targets.”

San Bernardino Police Chief Jarrod Burguan told ABC News that it was “remarkable” that so many people escaped alive from the country conference room, considering how well Syed and Tashfeen and blocked them inside an area with little cover or escape routes.

At the Shiloh memorial, I went to sit with Pastor Kathleen, a personal friend whom I’ve known for 12 years since I did an article about her and Bruce’s ministry for the “Mountain News.” Kathleen told me, “Nick and Syed used to banter back and forth a lot at work. Nick was not afraid to express what he believes (a freedom still guaranteed by our Constitution). This has been a difficult time. The worst thing about last Wednesday was the waiting. I sat with Jennifer in a gym from 11 a.m. when the shootings began until eight at night. The county kept sending in bus-loads of people. Finally, there were no more buses. Then some officials came and separated each of the family members into rooms. They did it very professionally, with a Chaplain and pastor there. Jennifer and I thought they were going to talk about how badly Nick was wounded and which hospital he was in. Instead, they said he had been killed.”

She paused and then added, “Another Messianic Jew, Michael Raymond Wetzel from Church of the Woods in Lake Arrowhead, was killed. He left a wife and six young children. Nick and Michael were obviously the shooters’ main targets.”

After the service, Jennifer sat up front, wearing her husband’s prayer shawl and holding a candle as people came to pray with her and give her a hug. As I approached, she smiled up at me, alone on that chair in front of so many people.

“Friday was the hardest day,” she said. “I was looking through Nick’s favorite music to find something for this memorial service. I just started crying and couldn’t stop.”

She showed me bracelets on her arm. One said “Yahweh,” the Jewish name for God, woven in the same blue color as the Israeli flag and the same blue Nick liked to wear with his Star of David tie pin. Jennifer’s other bracelet was a delicate silver chain with a single heart.

“It says ‘I love you,’” Jennifer whispered. “It’s from Tiffany’s. Nick gave it to me because I love Audrey Hepburn.”

I didn’t know what to say. How would Jennifer survive without the love of her life? She and Nick had walked together, ironically, since September 11, 2001. The San Bernardino Shooting of December 2, 2015 is the deadliest terrorist attack on American soil since that day. 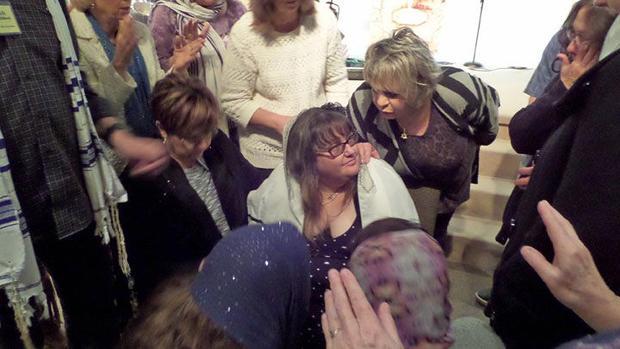 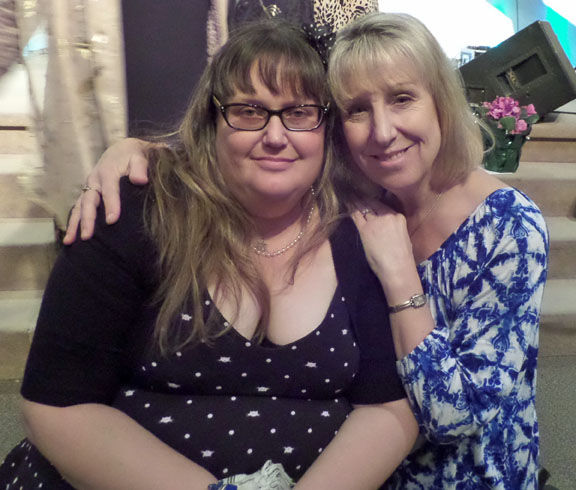 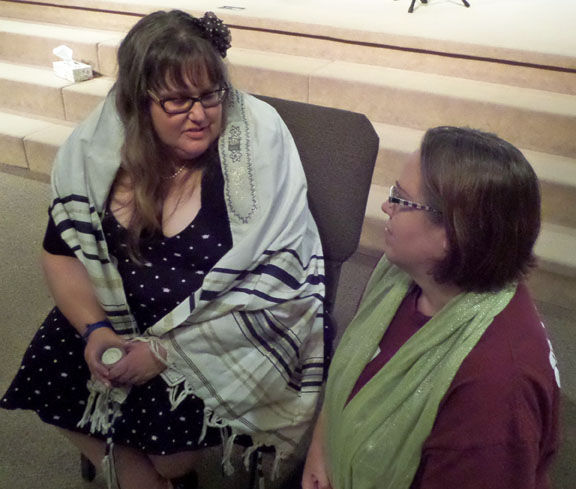 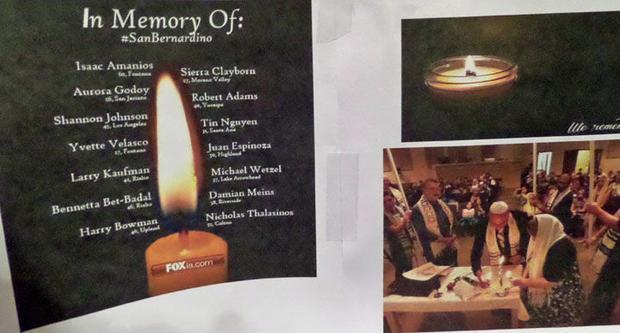 The memorial poster for Nick and Jennifer Thalasinos (pictured lighting Shabat candles) with a candle of remembrance and the names of the other 13 San Bernardino shooting victims
Lonna Lisa Williams
Advertisement. Scroll to continue reading. 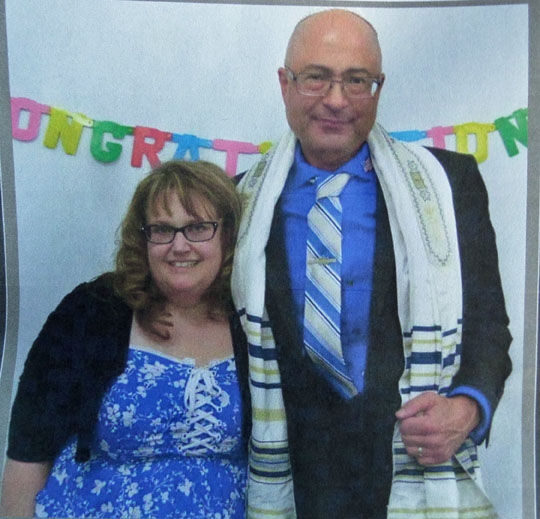