The fish kill has not been selective, as wildlife officials say the dead fish include minnows to large fish, up to 15 to 20 centimeters (6 to 8 inches) in length.

Christian Blanchette, the regional coordinator for Urgence Environment told CTV News that biologists and scientists came to the river on Thursday and Friday, trying to discover the cause of the fish kill. He said they were looking into several possible causes, including spills, sewage and construction waste.

According to Blanchette, some fish were found at the bottom of the river in an advanced state of decay, indicating the die-off had been going on for a number of days. Two wildlife officials collected a number of the fish on Friday morning for further study.

Residents in the area were alerted to the fish deaths Thursday evening and at first, everyone mistakenly believed the deaths were caused by companies in Saint-Hyacinthe’s industrial park, which emptied their tailings ponds on Thursday. But the fish deaths obviously preceded the dumping of the tailings by several days, so this was ruled out, according to CBC Canada.

Particularly alarming is the low water levels in the river. Blanchette said he could cross the river on foot without getting wet. He suggests that high temperatures, low water levels, and the use of the river as a source of drinking water may all contribute to the fish kill.

Blanchette pointed out that low water levels also mean less oxygen is available for the fish. Pointing to one section of the river that was dried up, he added, “There was nothing conclusive, except when we came to this area right now. Where you can see there’s no water in the river.”

CJAD News is reporting that the city is testing its drinking water every two hours to ensure it is safe to consume. The city is also expected to make a decision on Monday as to whether water restrictions need to be put in place. 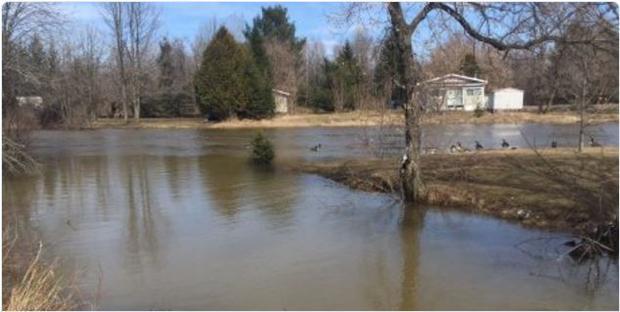 The Yamaska River and its ecosystem is hanging on for dear life at this point after years of environmental abuses.
Twitter

Crossing nearly 20 municipalities as it runs from its source in the Eastern townships, the Yamaska River winds it way 177 kilometers (110 miles) to Lake Saint-Pierre where it becomes a tributary of the Saint Lawrence River. The Yamaska River has had a hard life because of human and environmental impacts, but somehow, a much-depleted ecosystem has managed to survive.

According to a government of Canada publication entitled “The Effects of Nutrient Addition on Ecosystems”
Water quality in the Yamaska River is considered poor by Québec standards. Phosphorus concentrations exceed the Québec guideline for the prevention of eutrophication (0.03 mg/L total P) almost everywhere in the basin. At the mouth of the river, median concentrations for total P (0.195 mg/L) and N (2.15 mg/L) are higher than in any other tributary of the St. Lawrence River (Primeau 1999). Levels of P, N, suspended solids and turbidity throughout the basin are among the highest in Québec and the river is considered to be severely eutrophic.

“There’s not much to do then (except) wait for the rain right now, if it is that, which we think it is,” Blanchette said.