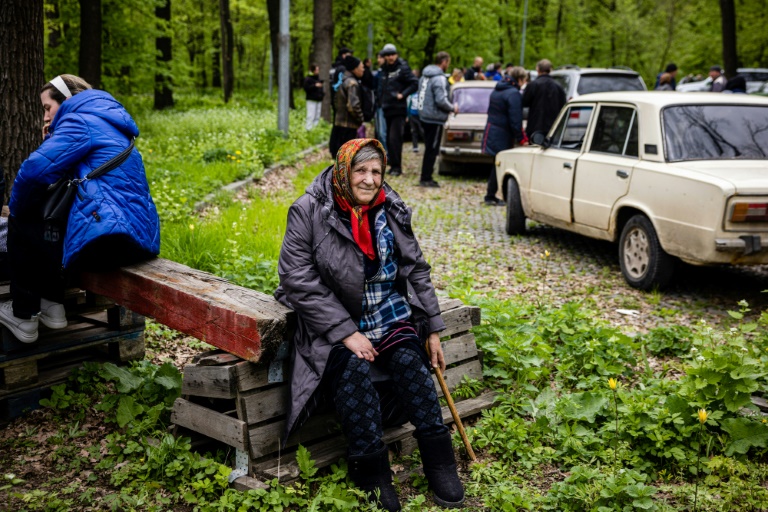 With tears of gratitude, exhausted residents grabbed their pets and whatever else they could carry and fled after being liberated from two months of terror under Russian occupiers.

Some had endured weeks in cellars without electricity, water or being able to replenish food supplies; others described their fear of the Russian soldiers and of living through bombardments.

After two months of “terrible fear”, several hundred people evacuated the village of Ruska Lozova, north of Ukraine’s second city Kharkiv, after it was freed by the Ukrainian army.

Arriving in Kharkiv in a fleet of cars, the villagers recounted their relief and spoke of the conditions they’d endured and feeling cut-off from the rest of the country.

“On the sixth day, the electricity and the water were cut off… We went back to our apartment after a week and there was an armoured personnel carrier under our window. We were very scared,” Tatiana Efimovna, 69, said.

“There was a boy riding a bicycle, they (the Russian soldiers) stopped him, put a bag over his head and tied his arms.

“Someone asked what they were going to do to him… It was humiliation above all. Their soldiers inspected houses and apartments,” she added.

The village, which had a pre-war population of 5,000 people, is crossed by the M20 motorway which leads to the Russian border.

The Ukrainian army regards Ruska Lozova as a place of “strategic importance” and says the Russians used it to target civilian infrastructure and homes in Kharkiv.

“We were in the basements without food for two months, we were eating what we had,” said Svyatoslav, 40, who did not want to give his full name, his eyes red with fatigue.

Ruska Lozova was finally liberated after intense shelling and fighting in recent days.

“We had two nights which were scary as hell… the night before last we thought the sky was burning, the whole village was burning,” said Svitlana Perepilitsa, 23, holding a small dog in her arms.

When the Ukrainians arrived, resident Natalia said she just left.

“We left everything there. We just took animals and everything we could put in the car. (It was) two months of terrible fear, nothing else, a terrible fear,” said the 28-year-old, also declining to give her second name.

According to Perepilitsa, the Russians were not there from the start of the war. “For weeks, we were in a sort of ‘grey zone’ but when they entered the village they cut us off from Ukraine.”

Did they force people to go to Russia? “They threatened us with a huge bombardment because they were going to attack Kharkiv.

“People simply didn’t know what else to do so they got on the bus and went to certain regions of Russia”, adds the young woman, saying parents with children in particular were “so tense, so panicky”.

When the Ukrainian soldiers arrived in the village, after two months of Russian occupation, Perepilitsa recalled how she saw them in the street from a window.

“I cried, but they were tears of gratitude because I was really happy to see them,” she said.

This Friday morning, “it was calm… we did not know if there would be an evacuation or not… My father saw that cars were driving. We took our things, our dogs and we left,” she added.

After arrival in Kharkiv, they had to undergo a short interrogation before being allowed to leave.

“They asked me about Belarus and Minsk, because I was born in Minsk and lived there for 23 years. I said that I liked being here in Ukraine,” said Efimovna, without being able to clarify who had conducted the interrogations.

Perepilitsa says her dog was born on the second day of the war and named “Bay, an abbreviation of Bayraktar”, from the name of the Turkish drone with which the Ukrainian army is equipped.

“He is very brave, so now I have my own little Bayraktar to protect us,” she added.