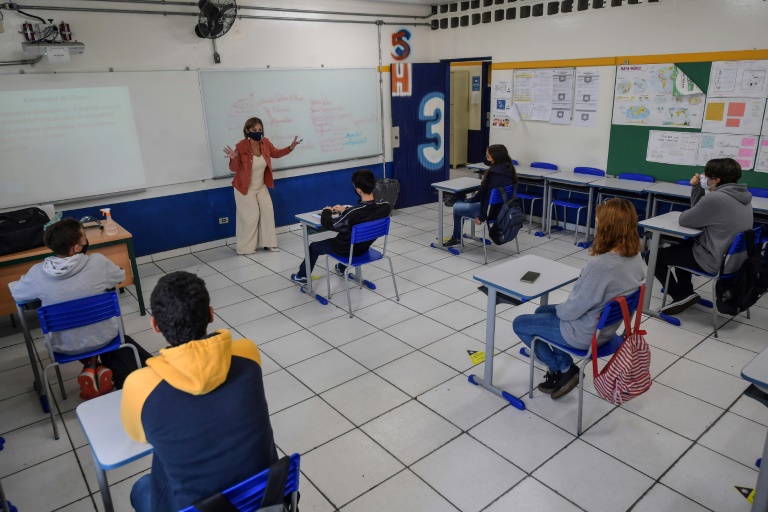 Standing in front of the mirror, Marlene Silva dos Santos admires the new tattoo splashed across her chest, covering the circular surgery scar left by the Brazilian 51-year-old’s battle with breast cancer.

Her skin still warm from the needle, Dos Santos gazes at the flowers that descend her torso and turn to diamonds, tattooed over her reconstructed left breast thanks to a project to help women overcome the physical and emotional scars of the past.

“You see that mark on yourself, and even though other people can’t see it, it hurts,” says Dos Santos, who had to undergo a mastectomy after she was diagnosed with cancer about five years ago.

“But now I see flowers. I didn’t think it would be so pretty,” she adds, visibly moved.

Dos Santos is one of about 160 women whom Sao Paulo tattoo artist Karlla Mendes has helped under a charitable project known as “We Are Diamonds,” launched in 2017 to soothe the scars of sickness, gender violence, accidents and other trauma.

“I want to remind them that they really are like diamonds — something rough that sparkles when you polish it,” says Mendes, who has made diamonds her tattoo trademark.

“It’s very gratifying to be able to use my art to help transform someone’s life, to give new meaning to a scar that brings back horrible memories, turn it into something she will look at and love herself.”

Kelly Pereira’s tattoo is a flower and diamond motif, too — in her case, stretching from her shoulder to her elbow, over the burn she suffered in a kitchen accident as a little girl.

Her mother was at work, she remembers, and her sister got the idea to cook their meal by setting rubbing alcohol alight because they were out of cooking gas.

“I’m not ashamed of my scar. It tells my story. It’s something I overcame, and I’m proud of that,” she says.

Pereira, 36, says her tattoo is not about hiding the scar, but rather “motivation to talk about it.”

“I want to show people we can be better, we can dream, transform our lives with simple acts that mark not just our flesh but our souls,” she says.

Some 600 kilometers (375 miles) away, in the southeastern city of Belo Horizonte, fellow tattoo artist Augusto Molinari also offers free help to those seeking to overcome the traumas engraved on their skin.

“You see people light up when they look at themselves in the mirror and feel whole again,” he says.

“It’s special to help someone redefine how they see their bodies, to transform their pain.”

Those he has helped include a woman whose abusive partner severely burned her and people who struggled with self-mutilation, he says.

Today, his “patient” is 66-year-old Dulcineia Soares, a keyboard player who lost the end of her left middle finger in a childhood accident with a sugarcane press.

Soares felt her partly amputated finger was on display every time she played keyboard, she says. Molinari tattooed a fingernail on it.

“Why didn’t I think of that before?” she says, holding up her hands to admire his work.

“I love it. This gives me a sense of freedom. I won’t have to hide my finger anymore.”

Back in Sao Paulo, Dos Santos looks at herself in the mirror again with a smile.

“This closes the circle,” she says, and puts on her blouse.

In this article:Brazil, Health, Lifestyle, Tattoos