Using the vascular systems of living roses, Rosa floribunda (garden rose), researchers, under the direction of Professor Magnus Berggren at the Laboratory of Organic Electronics (LOE), at Linköping University in Sweden have created analog and digital electronic circuits inside living plants.

The team wasn’t trying to create a race of higher plants that would one day enslave the human race, though. Instead, the researchers are looking at creating plants that can detect changes in temperature or the environment, such as drought, or crops whose growth can be accelerated or slowed down with the flick of a switch. These and other applications are possible, say the researchers.

Inquisitr is reporting the details of this incredible creation were published Friday in the journal Science Advances. The study describes one rose that has electronic circuits that run along its stem, and another rose that can change colors when voltage is applied to the plant.

Magnus Berggren, director of the Strategic Research Center for Organic Bioelectronics and Professor of Organic Electronics at Linköping University, said in a press release, “As far as we know, there are no previously published research results regarding electronics produced in plants. No one’s done this before.”

The success of the research using roses has rebooted an earlier attempt to put electronics into plants. In the 1990s, while researching printed electronics on paper, the LOE team at Linköping University worked on a project that attempted putting electronics directly into trees for the paper industry, but a lack of funding from skeptical investors put a halt to the project. 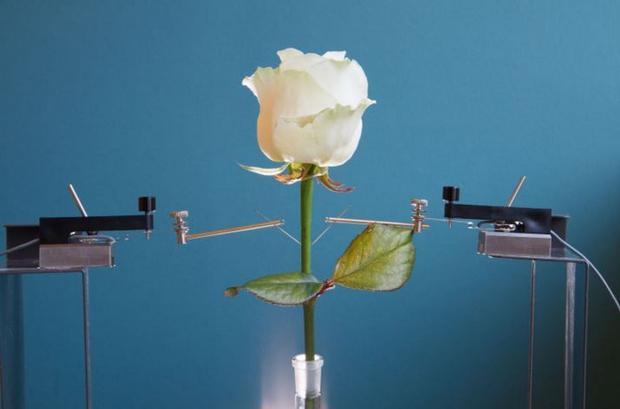 The researchers attempted to use architecture and biology of a plant for assembling electronic circuits inside.
Linköping University

How were the scientists able to achieve this? They used a rose’s photosynthetic process augmenting it by soaking the stems of roses in an electrically conductive polymer solution called PEDOT. They then recorded the results. After several tries, they discovered that when the roses were soaked in a PEDOT derivative called PEDOT-S:H, small wires with an electronic charge began to form along the roses’ xylems, or vascular tissues.

Additional tests proved that plants are able to carry an electrical charge, and a fairly stable one. “[A] constant current… can be maintained for extended periods of time,” the researchers wrote in the study. There were also few ill-effects to the roses, with the flowers living as long as they would under normal conditions.

“Now we can really start talking about ‘power plants’ – we can place sensors in plants and use the energy formed in the chlorophyll, produce green antennas, or produce new materials. Everything occurs naturally, and we use the plants’ own very advanced, unique systems,” Berggren said.

This study was published in the journal Science Advances on November 20, 2015, and is titled, Electronic Plants.