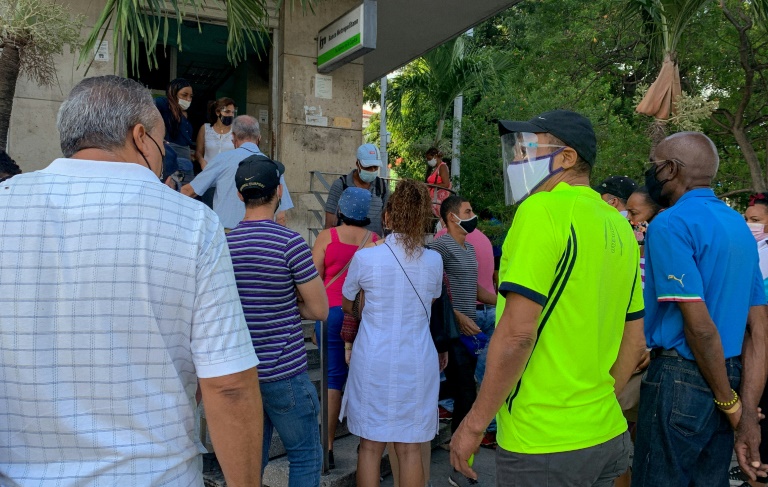 Cuban Elis Dania Lopez, 44, receives $100 a month from her father in the United States, which she uses to buy food, but next week banks will no longer accept cash deposits in greenbacks.

Last week, Cuba’s central bank announced a suspension of dollar deposits due to what it called continuing difficulties caused by the US embargo on the communist island nation.

The measure applies only to US dollars, which means hard-up Cubans will be forced to buy other currencies such as the euro. Analysts say it will hit them in the pocket.

It’s a huge problem for Cubans in a country where remittances — mostly from the US — make up the second largest revenue stream in the country, after the export of medical personnel.

Remittances account for three billion dollars a year, according to calculations by academics.

Since Western Union closed its branches on the island last November, due to US sanctions, most of the money sent to Cuba — usually small sums — is brought in cash by travelers arriving from the US.

“It’s a bad decision,” Lopez said about the new measure, adding that the “best products” are only available in shops that accept dollars.

Cubans have mostly done so using dollars, so in order to re-fill those cards they will now need other currencies.

“For inhabitants, it’s a new restriction that impacts their standard of living,” economist Omar Everleny Perez, from the Christian Center for Reflection and Dialogue, told AFP.

He said it would cost more for people to send money to Cuba because they will first have to convert their dollars into something else.

The Central Bank says it is finding it increasingly difficult to deposit its dollars in international banks due to the US embargo that was first imposed in 1962.

Things got worse at the beginning of 2021 when the Donald Trump administration put Cuba back on the US list of state sponsors of terrorism.

“The (central bank) safe almost couldn’t close because of the amount of dollars,” said Perez.

“The Cuban state cannot go with suitcases full of dollars to deposit them in Europe because no European banks will accept them,” Perez said. Indeed, those banks want to steer clear of Cuba for fear of being blacklisted themselves.

Self-employed Maykel Benitez, 42, is waiting with his family in front of a store that sells cleaning products but only accepts foreign currencies.

With a sigh of resignation, Benitez said he “makes do with what’s available.”

Like many Cubans that don’t have relatives abroad, Benitez has been buying dollars on the black market, but he has had to pay up to 70 Cuban pesos when the official exchange rate is 24.

From now on, “I’ll tell (the exchanger) not to give me dollars but euros, Canadian dollars, pounds sterling, or any other currency,” he said with a shrug.

This measure could lead to “the euroization, instead of dollarization” of the Cuban economy outside of state controlled markets, Pavel Vidal, a Cuban economist at the Javeriana University in Cali, Colombia, told the El Toque website.

The euro remains rare on the island because it is usually brought by tourists and they have been mostly absent since the coronavirus pandemic hit.

It will take “a certain amount of time for the euro to replace (the dollar) in the national economy,” said Perez, adding that it would prove more expensive for Cubans.