Scientists have known for a long time that the Arctic’s permafrost contains vast amounts of carbon in dead plants and other materials. Actually, there is twice as much carbon locked up in frozen permafrost than is found in the entire atmosphere.

But with climate change, the Arctic permafrost is thawing as this far-north region warms up faster than anywhere else on the planet. To further explain, as the Arctic regions warm, the organic matter in the permafrost thaws and warms up proportionately. Bacterial decomposition takes place that in turn leads to the formation of methane and carbon dioxide, reports The Star.

Lead Author of the study, Katey Walter Anthony of the University of Alaska, says she has been walking on the frozen lakes for a long time. “I would go out after the ice formed, look at the lake ice surface and see bubbles. I observed that bubbles are most dense and largest along the edge, where the margins were expanding, where the permafrost was thawing.” 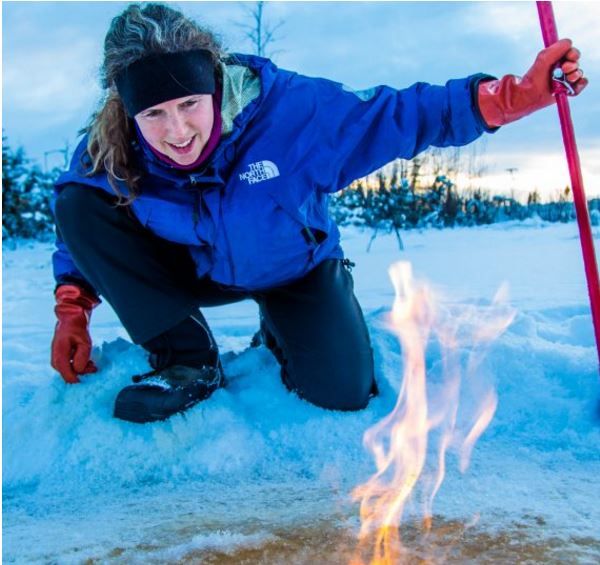 Her curiosity led to the study. She had three questions: Was the thawing permafrost responsible for the bubbles? If so, was the permafrost releasing ancient carbon? And if this was true, how much was being released?

Using aerial imagery and other data, the researchers looked at lakes in Alaska, Canada, Sweden and Siberia. They measured the changes in the lakes over the past 60 years. They found that the amount of gasses being released from a lake was related to its expansion.

In other words, the more the permafrost around the waters edge of a lake thawed, the bigger the lake became, and the more greenhouse gasses were released.

The team captured some of the greenhouse gasses and subjected them to radio-carbon dating. They found that the gasses they measured were from carbon that had been stored for 10,000 to 30,000 years.

But it was the final question of how much was being released that surprised the research team. It has long been thought that there would be a spike in greenhouse gas levels when the long-frozen carbon was thawed. And it that’s true, it hasn’t happened yet.

And it also tells us it could happen. “Today, the permafrost-carbon feedback is pretty small, says Walter Anthony. Climate models suggest that over the next 90 years, greenhouse gas levels will be 100 times higher than those the team measured.

“I believe it will (happen), but when are we going to start seeing that?” she asked. “It’s a lit fuse, but the length of that fuse is very long. According to the model projections, we’re getting ready for the part where it starts to explode. But it hasn’t happened yet,” she said.

In a study published in November 2015, it was determined that the Arctic permafrost had in excess of 1.7 trillion tons of carbon in the form of frozen organic matter that escapes as methane and CO2 as it warms and thaws. The study pointed out that “People have called it a climate time bomb, because of the danger of a rapid release of gas from the permafrost.”

This very interesting study, “Methane emissions proportional to permafrost carbon thawed in Arctic lakes since the 1950s,” was published in the journal Nature Geoscience on August 22, 2016.