At 11:00 a.m. on Monday, October 8, the National Hurricane Center said the center of Hurricane Michael was located about 50 miles (80 kilometers) south of the western tip of Cuba and about 140 miles (220 kilometers) east-northeast of Cozumel Mexico.

Michael has sustained winds of 75 mph (120 kph) and is moving to the north at 7.0 mph (11 kph). This northward movement is expected to continue through Tuesday night at a slightly faster forward speed, followed by a turn toward the northeast on Wednesday and Thursday.

The forecast track
On the forecast track, the center of Michael will move northward near the western tip of Cuba this afternoon and into the southeastern Gulf of Mexico by tonight. Michael will move across the eastern Gulf of Mexico Tuesday and Tuesday night and is expected to move inland over the Florida Panhandle or Florida Big Bend area on Wednesday. 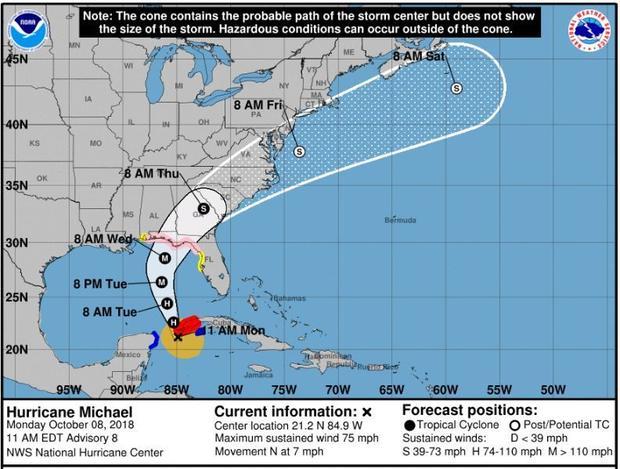 The forecast indicates Michael may be a Category 3 hurricane – with winds from 111 to 129 mph — when it strikes. “Life-threatening storm surge is possible along portions of the Florida Gulf Coast regardless of the storm’s exact track or intensity,” the NHC said.

“Well-built framed homes may incur major damage or removal of roof decking and gable ends. Many trees will be snapped or uprooted, blocking numerous roads. Electricity and water will be unavailable for several days to weeks after the storm passes.” The storm is expected to move northeastward across the southeastern United States Wednesday night and Thursday.

“Heavy rainfall from Michael could produce life-threatening flash flooding from the Florida Panhandle and Big Bend region into portions of the Carolinas through Thursday,”{ said the NHC.

Florida State of Emergency declared
Florida Governor Rick Scott declared a state of emergency Sunday evening. “The Panhandle and Big Bend could see winds in excess of 100 mph,” Scott said at a briefing Sunday evening. “Remember, this storm could grow stronger and be a Category 3 hitting our state. This storm will be life-threatening and extremely dangerous.”

The National Hurricane Center is forecasting storm surge between 7 and 11 feet in certain areas, Scott said Monday. The NHS warned of a “risk of “life-threatening storm surge.”

The storm is expected to move further inland and to the north-northeast on Wednesday, bringing rain and wind to Georgia, South Carolina, North Carolina, and Virginia.