The Goodwin Fire is still too dangerous for fire officials to make a good assessment of the conditions or to even find out how many structures have been destroyed. The intensity of the fast-growing fire through the densely forested region has prompted Arizona Governor Doug Ducey to declare a state of emergency in Yavapai County, reports Reuters.

Over 500 firefighters are fighting the wildfire burning in communities around Prescott, a mountain city about 100 miles (160.9 kilometers) north of Phoenix. The fire has so far charred about 28 square miles (73 square kilometers), all the while being fanned by winds whipping up to 35 mph (56 kph). 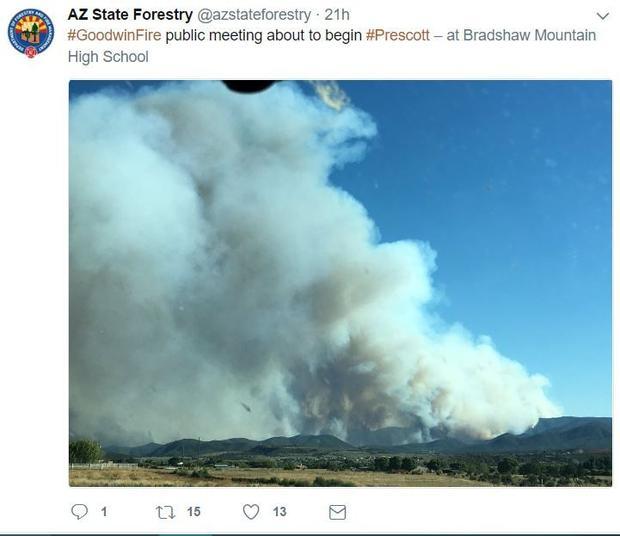 The fire forced the evacuation of Mayer and Dewey-Humboldt along with several other communities, as well as causing one of the main roads into Prescott to be closed. Dewey-Humboldt has about 4,000 residents, while Mayer has about 1,400. People living in this region still have memories of the 2013 wildfire that killed 19 members of an elite firefighting crew.

“It’s scary because we’re coming up on the four-year anniversary of the Yarnell Hill fire — there’s still a lot of fresh memories,” said Arizona state Sen. Karen Fann, who lives in Prescott and represents the area where the fire is burning, reports ABC News. 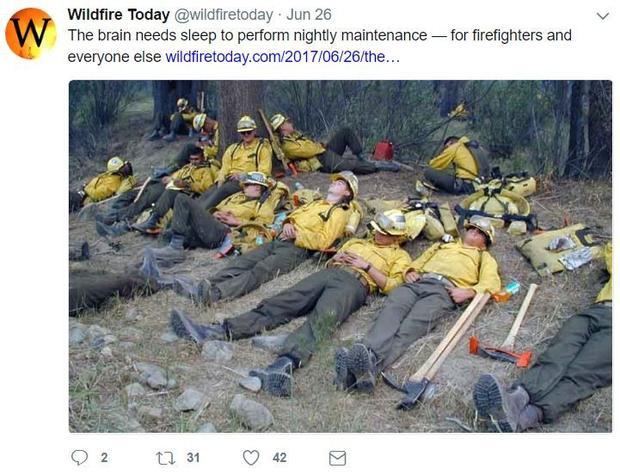 John Pierson, the incident commander for the Goodwin Fire told AZ Central the fire had claimed at least some structures around Piney Flat, but he could not say if any homes were destroyed. The fire was only contained about 1.0 percent this morning. Pierson did emphasize that firefighters were doing everything possible to prevent a repeat of the 2013 Yarnell disaster.

Fires burning in other states across the West
The Brian Head Fire burning nearly 300 miles (483 km) south of Salt Lake City has grown overnight, charring an additional 4,000 acres. It now covers over 54,000 acres (21,853 hectares). The Brian Head Fire has destroyed at least 13 homes and forced the evacuation of 1,500 people as it continues to rage for the 12th day. 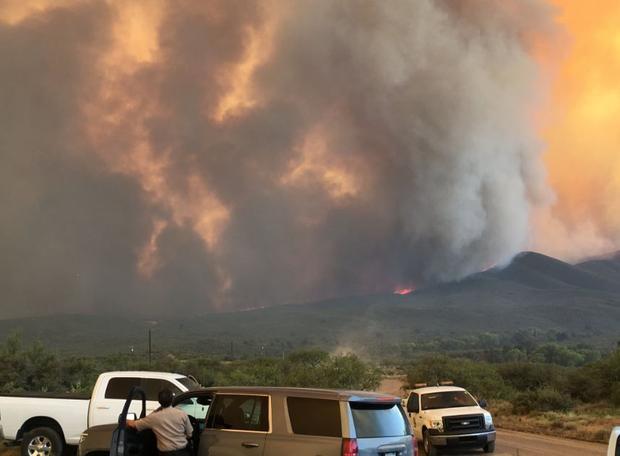 SR 69 is CLOSED btwn I-17 and SR 169 due to Goodwin Fire.
Arizona Department of Transportation

In Washington state, firefighters are battling three fires near Wenatchee that had grown to about 37 square miles (95 square kilometers) as of Wednesday. California also has several wildfires going, including the one that destroyed the home of “Big Bang Theory” star Johnny Galecki on a ranch in the San Luis Obispo area.

In Idaho, state fire officials are praising the quick responses of farmers and others to the 20 or so wildfires sparked by lightning. By keeping the fires under control, they prevented them from becoming major blazes.

And again, a quick reminder is in order – Be careful when you’re out in the forests and woodlands, folks. Unless you have lived through a forest fire, you will have no idea of the unbelievable size and destructive power of that wall of flames.