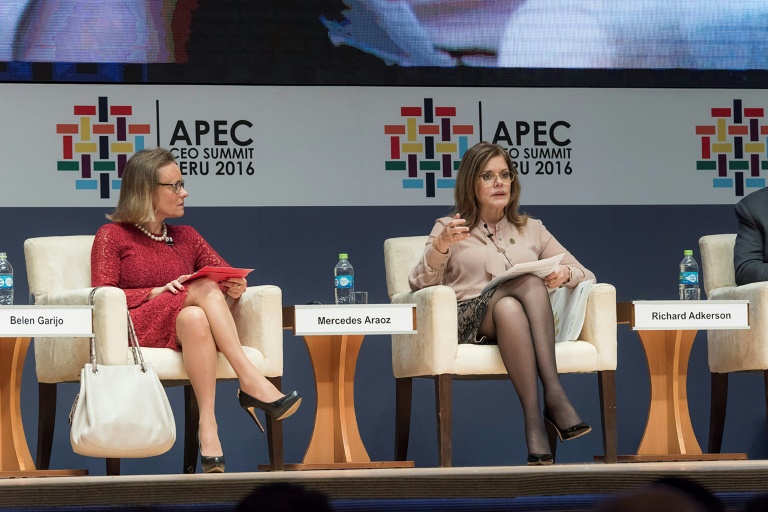 Belen Garijo will take over as CEO at German pharmaceuticals giant Merck from May — the first woman to singlehandedly run a DAX 30-listed company — as Europe’s top economy debates quotas for greater boardroom equality.

Spanish-born Garijo, 60, currently serves as the group’s deputy chief executive officer and head of its healthcare unit and says she’s not content to be a one-off.

“It’s more important to me not to be the last woman at the top of a company than to be the only one,” the trained doctor recently told the daily Frankfurter Allgemeine Zeitung.

She is replacing Stefan Oschmann, 63, whose term ended after five years at the helm of the Darmstadt-based, family-owned group, which had never had a female chief executive in its 350-year history.

Garijo, a mother of two and a passionate Real Madrid supporter, is making history as the first solo female leader of a firm listed on Frankfurt’s blue-chip DAX 30 index.

German software group SAP made the first cracks in the glass ceiling in 2019 when it appointed Jennifer Morgan as co-CEO alongside a male executive.

However she bowed out last year after just six months, as SAP decided to switch back to a sole chief executive — Christian Klein — to steer it through the pandemic upheaval.

Although Germany has been run by a woman chancellor for nearly 16 years and Christine Lagarde heads the Frankfurt-based European Central Bank, female top executives remain a rare sight in Europe’s leading economy.

Germany’s gender pay gap is also one of the largest in Europe, with women earning about 21 percent less than men on average. But things are changing.

The German government introduced legislation in 2015 requiring women to make up 30 percent of supervisory board seats in large companies, and Chancellor Angela Merkel’s cabinet approved plans in January to introduce similar rules for executive boards.

She has been credited with overhauling the department’s research and development and refocussing attention on fewer drugs with better prospects, boosting sales and profits, according to the Handelsblatt financial daily.

The group has been among those at the forefront of the fight against Covid-19 by delivering lipids used in the production of the Pfizer-BioNTech vaccine.

Garijo for her part puts her success down to “hard work” and to having seized her chances “when they arose”.

She is not, however, a fan of legal quotas to promote women, even in the face of middling results from voluntary measures by industry.

Under the draft law approved by Merkel’s government earlier this year, listed companies with four executives or more must appoint at least one woman to their executive boards.

Included in the new legislation, companies in which the government holds a majority stake — such as the rail group Deutsche Bahn — will have stricter rules, with at least one woman on management boards with more than two members, and a 30-percent quota to come in the future.

The legislation, the object of a political tug-of-war ahead of a general election to pick Merkel’s successor in September, must still pass parliament.

Seventy-three groups would be impacted by the new rules, among which 32 currently have no female representation in the executive suite, according to government data.

Merkel, in power since 2005, has spoken out at foot-dragging by business leaders, against the resistance of some in her own conservative bloc.

“It’s time, following action with the surveillance boards, for something to finally happen with executive boards — it’s in the interests of the companies too,” said Katharina Wrohlich, gender researcher at economic think tank DIW, which has since 2006 compiled a barometer of female representation at Germany’s top firms.

At the end of 2020, they counted just under 14 percent women on their executive teams, versus around 35 percent on supervisory boards, giving ammunition to those calling for legal remedies.