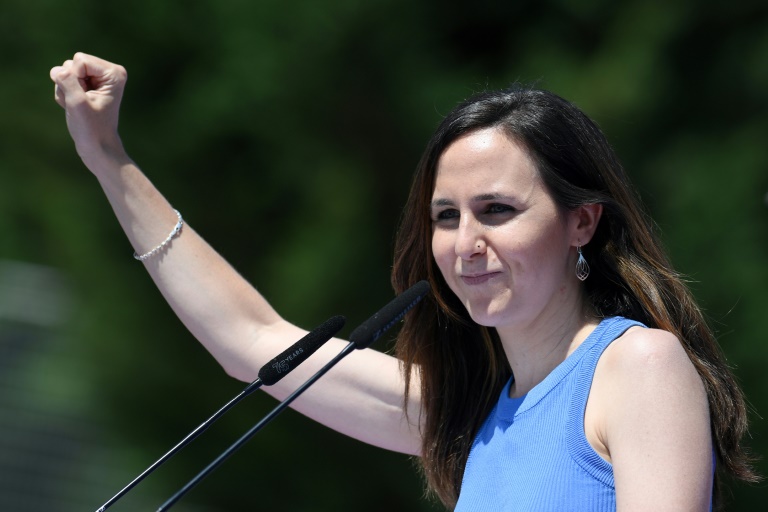 Podemos, the junior member of Spain’s ruling coalition, on Sunday formally appointed Ione Belarra as its new leader, putting two women at the helm of the radical left-wing party following the departure of its founder.

Belarra received 89 percent of the vote in a week-long ballot to be named the new secretary-general at a party assembly in Alcorcon near Madrid.

“Podemos must grow” and “continue to work to conquer new social advances,” the 33-year-old said following the vote by her party, which has seen declining support in recent years.

The vote followed the departure of founder Pablo Iglesias, who did not attend the gathering in a gesture to show that he no longer exerts any influence over the party he established in 2014.

But Belarra has the full blessing of Iglesias, who decided to withdraw from politics following a crushing defeat to the right in the May 4 regional elections in Madrid.

Running against two unknown candidates, Belarra was the overwhelming favourite in the week-long vote.

But although she takes the helm, it will be Labour Minister Yolanda Diaz, 50, who will head the list for Podemos and its allies in the next general elections, due by January 2024.

Having two leaders in charge “is not within the organisational culture of Podemos” which is more accustomed to the super-charged leadership of Iglesias, said Paloma Roman, professor of Political Science at Madrid’s Complutense University.

A native of the northern city of Pamplona, Belarra has worked for the Red Cross and for the Spanish Commission for Refugee Aid and been a Podemos activist since the very beginning.

A trusted member of Iglesias’ inner circle, she was appointed a junior minister within the social affairs ministry that he headed when Podemos entered government in January 2020.

When Iglesias stood down early last month, Belarra inherited his role as social affairs minister, while Diaz took up his position as a deputy prime minister.

As secretary-general, Belarra will be surrounded by some of Iglesias’ closest allies, including his partner, Equality Minister Irene Montero, with whom she studied psychology at university.

From Sunday, the two ministers will share the party leadership.

And although both are outspoken feminists and share a passion for addressing wage insecurity, they have very different approaches.

Belarra takes a more confrontational style, and has not held back from highlighting the differences between Podemos and the Socialists in government, such as branding Defence Minister Margarita Robles the right’s “favourite minister”.

Diaz, however, has shown herself to be more conciliatory.

A former lawyer and Communist activist whose father was a well-known union leader, she has negotiated with employers and unions to set up a furlough scheme that has been critical for avoiding mass layoffs during the pandemic.

In a recent speech to Podemos MPs, Diaz called for “calm and composure” in the face of the anxiety generated by “Twitter politics” where the party has traditionally been very belligerent.

And she urged a return to its anti-austerity origins to manage a society that is “suffering a lot and is resentful”.

Having two at the top “is going to be quite complicated” in that Belarra will want to have “a very strong and well-controlled party, and not leave room for Yolanda Diaz to do things her way”, said political scientist Jose Ignacio Torreblanca.

“I don’t know if Belarra will be able to get the upper hand over Yolanda Diaz” who has “her own image and ideas”, he added.

The main “fight” will be over who drafts the programme for the next general elections and the choice of candidates who will be on the party list.