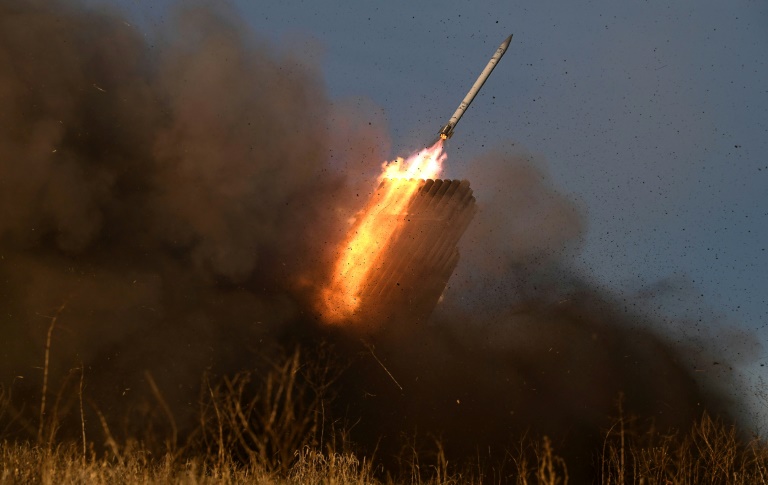 For a handful of Ukrainian gunners camping under a clump of trees not far from the Russian lines, the day passes beside a BM-21 Grad rocket launcher waiting for firing orders.

The Soviet-made contraption is the 1960s version of “Stalin’s Organs”, a fearsome World War II-era weapon that terrorised Nazi German soldiers, its 40 tubes able to launch 122 mm rockets that can hit targets up to 20 kilometres (12 miles) away.

Far behind them, Ukrainian guns spray the Russian positions from above.

The latter respond in a relentless artillery duel along the length of the frontline.

Wearing his cap back to front, Maksym, a bearded man in his 30s, explained to AFP that the day was “hectic”.

“This morning they (the Russians) shot at us, not far away. We were forced to go down into the shelters. Now it’s calmer,” he said to the clatter of artillery exchanges.

The coffee had just been served in plastic cups when the order from command finally arrives.

The men grab their weapons, helmets and bulletproof vests and run towards the truck which takes off with a bang, roaring its powerful diesel engine before rolling at breakneck speed across fields.

Suddenly it stops. The tubes rise, and rotate, as the men make final adjustments.

Only three minutes after the truck stopped, five rockets exit the tubes one by one in a thundering crash.

Each Grad rocket, a word meaning “hail”, launches a bolt of fire in its wake amid a thick cloud of smoke.

It’s time to go: getting spotted by enemy radars risks triggering a quick and destructive response.

As soon as possible, the truck returns to “base” to take cover, the target remaining confidential to AFP journalists, as do the techniques that allow it to be targeted.

“We receive the order, and the target we must strike,” said a young 23-year-old officer nicknamed “Buk” (“beech”), coincidentally the name of the Russian missile system which in 2014 shot down an airliner over this same region, killing 298 people.

“We set off, deal with the target, and return.”

“This weapon is still effective because it has a long range and can hit a lot of targets,” he added.

“It depends how pissed off the Russians are, if they don’t leave our infantry alone, we go out a lot more,” he said when asked how many times a day they carry out this manoeuvre.

And as for the decision Wednesday by Russian President Vladimir Putin to order a “partial” mobilisation of 300,000 men, Buk answered bluntly: “That will be enough for us to fertilise our land.”