In the agreement announced on Monday, Japan will pay 1 billion yen ($8.3m, £5.6m), the amount South Korea asked for to fund support services for the remaining 46 Korean women still living of the estimated 20,000 to 200,000 women kidnapped and forced to act as prostitutes for the pleasure of the Japanese Imperial Army during WWII.

According to the agreement, the money will come from Japan’s government coffers, as state-funded compensation, quite different from an earlier agreement struck during the 1990s-2000s that funded compensation through private donations. 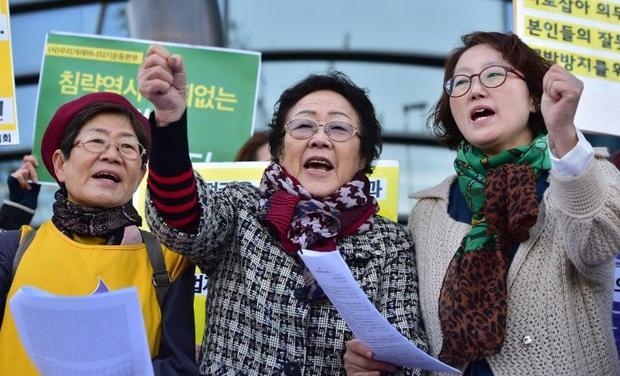 South Korea also demanded an apology from the Japanese government, calling on Prime Minister Shinzo Abe to apologize for the women’s treatment, which he did as part of the deal. The announcement came after Japan’s Foreign Minister Fumio Kishida met his counterpart Yun Byung-se in Seoul. Later, Abe telephoned South Korean President Park Geun-hye to repeat the apology made by the foreign minister.

According to the BBC, Mr. Abe told reporters, “Japan and South Korea are now entering a new era. We should not drag this problem into the next generation.”

Of course, the agreement was applauded by the U.S., more so because a major improvement in political ties between the two countries is becoming increasingly important as China becomes more assertive in the region and North Korea continues to be a threat.

Reuters quoted Korean President Park’s office as saying, that Park told Abe it was “hoped that since the two governments worked through a difficult process to reach this agreement, they can cooperate closely to start building trust and open a new relationship.” 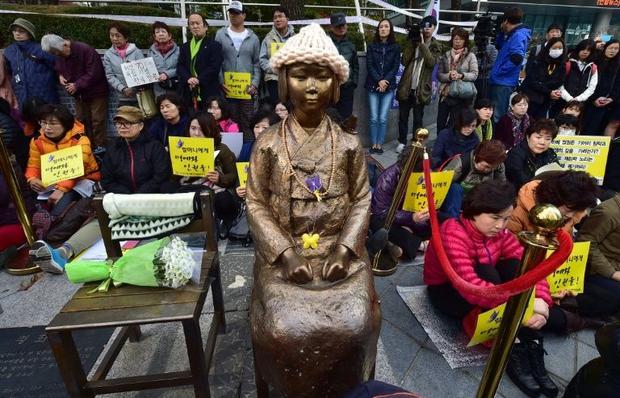 Protesters sit next to a statue symbolising the 'comfort women' who served as sex slaves for Japanese soldiers during World War II, during a weekly anti-Japanese demonstration near the Japanese embassy in Seoul, in November 2015
Jung Yeon-Je, AFP/File

South Korea’s Foreign Minister Yun told a news conference, “On the premise that the steps pledged by the Japanese government are earnestly carried out, the Korean government confirms that the matter (of comfort women) is finally and irreversibly resolved.”

According to the Wall Street Journal, there are still ongoing issues over the use of Koreans as forced laborers by Japan during the war, as well as allegedly inaccurate descriptions of both countries in Japanese textbooks during what is called the “colonial period” that ended in 1945.

Comfort women’s numbers may never be known
The number of women used as prostitutes by Japan during the war has been estimated to be as low as 20,000 to as high as over 200,000. Many of the women were from Korea, then a Japanese colony, as well as a number of other Asian countries. Women from the Netherlands and Australia were also taken and used as comfort women.

According to historical testimony, young women were abducted from their homes or lured by promises of work in factories or dining establishments, then incarcerated in “comfort stations” in foreign lands held by the Japanese.

Whatever the numbers, about three-quarters of these women died while in captivity, and those that did survive were left infertile because of sexual trauma and repeated infections from venereal diseases. The survivors also told of being raped and beaten daily, while those who refused to comply were executed.