On November 28, the Chronicle Herald reported that hundreds of dead and dying herring had been washing up with the tide along the northeastern shore of St. Mary’s Bay in Digby County. One resident of Brighton, Joan Comeau also reported she had seen some seals that had cuts and gashes all over them.

Department of Fisheries and Oceans (DFO) reported that Department of Natural Resources staff had picked up a dead seal, and the Digby detachment of the DFO at the time said they hoped to have an answer to the herring mortality later that week. 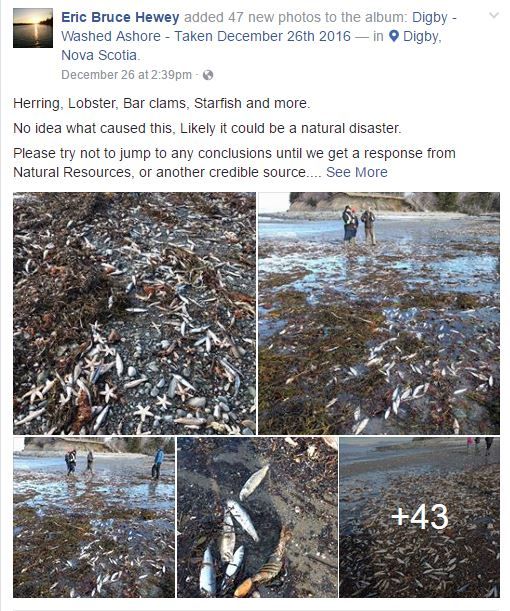 DFO detachment supervisor Gary Hutchins said it could be a parasite affecting the herring, or possibly just a natural phenomenon caused by whales or other predators. He added that this scenario has been seen before in other locations.

The mystery is growing as other species turn up dead
Recently, the mystery has deepened as social media photographs of bottom-dwelling marine life strewn across the sand have shown up. Dead fish have also started washing up on the shores of the Annapolis Basin.

“We started finding starfish, crabs, flounder. We found ocean perch and then yesterday we started finding scallops on the beach and like I said everything’s dead… we’d like to know what’s going on,” said Plympton resident Karl Cole, according to CTV News. 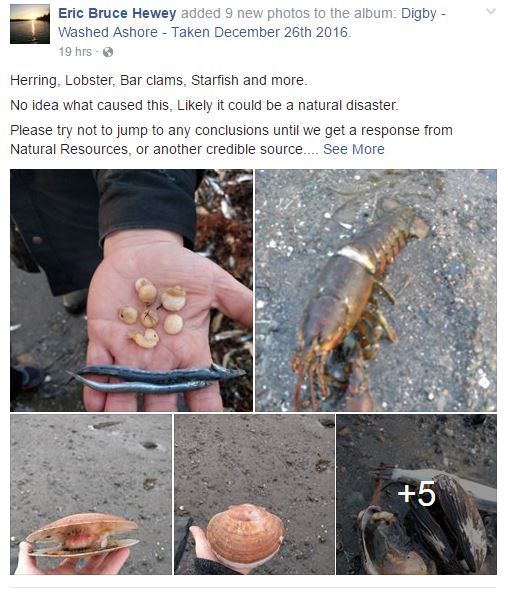 Eric Hewey took pictures and posted them on his Facebook page, writing: “Herring, Lobster, Bar clams, Starfish and more. No idea what caused this. Likely it could be a natural disaster. Please try not to jump to any conclusions until we get a response from Natural Resources or another credible source.”

As of today, more than 1,200 people have viewed the photos, and many have their own ideas as to what has caused the marine animal deaths, ranging from seismic activity to some kind of gas leaking from the Earth. One writer suggested this: “One possibility is the increase of electromagnetic pollution affecting animal migrations.” 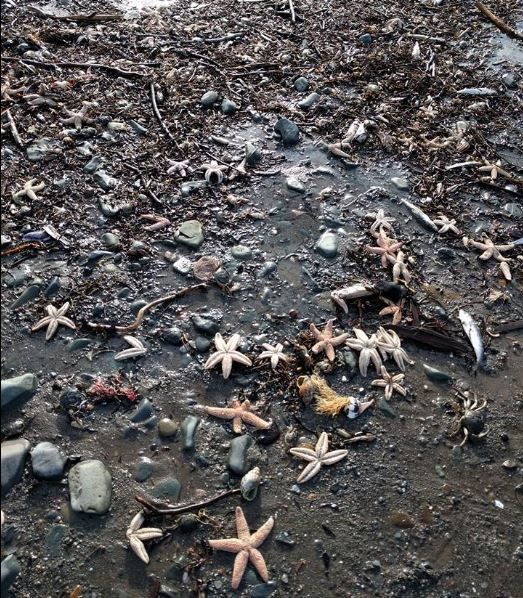 But Marco Ferreira sort of summed up the feelings of many people who commented on the pictures. He wrote: “Whatever the cause, is, to be honest, is irrelevant because our hearts and intuition are already telling us it’s because of human intervention and actions this disaster happened. We are in a 6th mass extinction. These kind of stories are happening all over the world… we are losing hundreds of species every single day…”

The Times Colonist reported today that federal scientists have performed a battery of tests and still have yet to determine the reason for the deaths of the herring. Tests have been negative for physical damage and several types of bacterial and viral infections.

In a related news story, the U.K.’s Daily Mail reported on December 5 that Thousands of dead herring and mackerel washed up on Pentewan beach in Cornwall, U.K. Earlier this year, according to the Daily Mail, “hundreds of jellyfish were stranded on nearby Perranporth beach and the cause was again unknown.” So, what is going on?