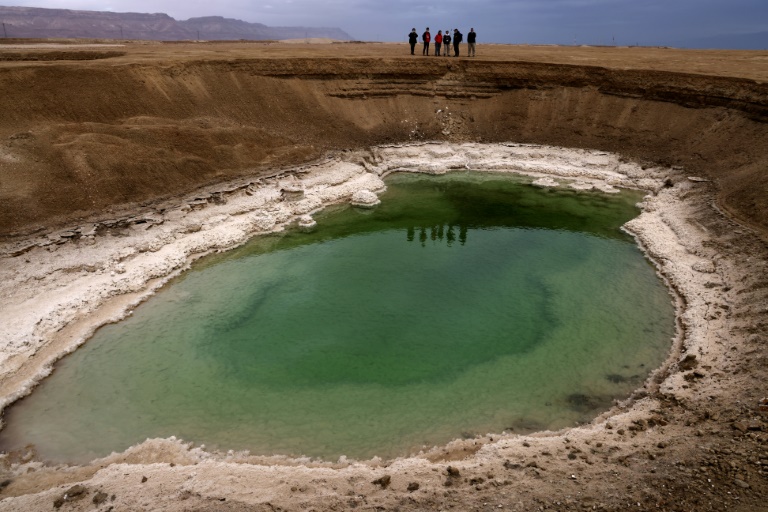 In the heyday of the Ein Gedi spa in the 1960s, holidaymakers could marinate in heated pools and then slip into the briny Dead Sea. Now the same beach is punctured by craters.

A spectacular expanse of water in the desert, flanked by cliffs to east and west, the Dead Sea has lost a third of its surface area since 1960.

The blue water recedes about a metre (yard) every year, leaving behind a lunar landscape whitened by salt and perforated with gaping holes.

Going forward, “you might be lucky to have a channel of water here, that people will be able to put their toes in,” laments Alison Ron, a resident of Ein Gedi who once worked at the spa.

“But there will be a lot of sinkholes.”

The sinkholes can exceed 10 metres (33 feet) in depth and are a testament to the shrinking sea. Receding salt water leaves behind underground salt deposits. Runoff from periodic flash floods then percolates into the ground and dissolves the salt patches. Without support, the land above collapses.

At the Ein Gedi thermal baths, the roughly three kilometres (two miles) of rocky sand that now separate the spa from the shore are dotted with holes and crevices.

Further north, a whole tourist complex has turned into a ghost town, disfigured by craters and enclosed in fences. The pavement is gutted, the lampposts overturned, the date plantation abandoned.

Ittai Gavrieli of the Israel Geological Institute told AFP there are now thousands of sinkholes all around the shores of the Dead Sea, in Jordan, Israel and the occupied West Bank.

They reflect human policy that has literally decimated the flow of water into the Dead Sea. Both Israel and Jordan have diverted the waters of the River Jordan for agriculture and drinking water. Chemical companies have extracted minerals from the seawater.

Climate change further accelerates evaporation. In Sodom, Israel, southwest of the Dead Sea, the country’s highest temperature in over 70 years was recorded in July 2019 — 49.9 degrees Celsius, or nearly 122 Fahrenheit.

Gavrieli said the Israel Geological Institute is monitoring the formation of sinkholes from space but it is not an exact science.

He said they are certainly “dangerous” but also “magnificent.”

“It has potential to become a tourist attraction, if you’re willing to take the risk on one hand and if insurance issues are clear,” he said.

Much too perilous, answers Gidon Bromberg, Israeli director of the NGO EcoPeace, for whom the sinkholes are “nature’s revenge” for “the inappropriate actions of humankind”.

“We will not be able to bring back the Dead Sea to its former glory,” he said. “But we are demanding that we stabilise it.”

His organisation, comprised of Jordanian, Palestinian and Israeli environmentalists, advocates increased desalination of seawater from the Mediterranean to relieve pressure on the Sea of Galilee and the River Jordan, which could then flow back to the Dead Sea.

EcoPeace would also like the industry to be “held accountable” by paying more taxes.

Asked by AFP, a spokesman for Jordan’s water ministry offered no detailed fix for the crisis. Instead, he said the donor community should play a “vital role” in sparking interest “to find reasonable solutions to the Dead Sea problem”.

In June, Jordan abandoned a long-stalled proposal to build a canal with Israel and the Palestinians to carry water from the Red Sea to the Dead Sea.

Instead, Amman announced it would build a desalination plant to supply drinking water.

Even if the canal had been built, it could not have saved the lake on its own, said hydrologist Eran Halfi of the Dead Sea-Arava Science Center.

So is the Dead Sea doomed to evaporate? Scientists say its decline is inevitable for at least the next 100 years. Sinkholes will keep spreading over the century.

However, the lake could reach an equilibrium because as its surface decreases, the water becomes saltier and evaporation slows down.

In Ein Gedi, Ron said that forecast gave her little satisfaction. By diverting rivers and building factories, she said, “man has interfered”.

“We have to be ashamed of ourselves that we have allowed this to happen,” she said.

In this article:dead Sea, sinkholes