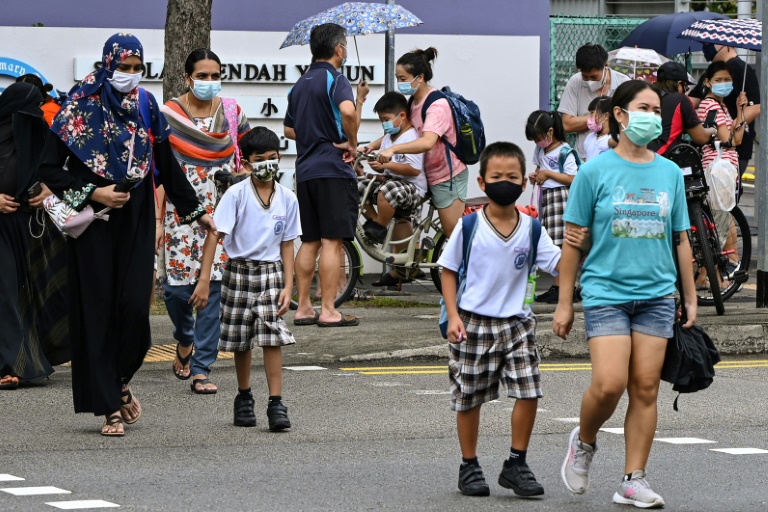 Singapore will close schools from Wednesday as authorities warned new coronavirus strains such as the one first detected in India were affecting more children.

Taiwan also shut schools in the capital Taipei to control an outbreak, and the island banned all foreigners from entry or transit for a month unless they had a residency card.

Both governments have been tightening restrictions to fight a recent rise in cases, after remaining relatively unscathed during the pandemic compared with the rest of the world.

Authorities in Singapore said Sunday that primary and secondary schools as well as junior colleges would shift to full home-based learning from Wednesday until the end of the school term on May 28.

The announcement came after Singapore confirmed 38 locally transmitted coronavirus cases, the highest daily count in eight months. Some of the cases involved children linked to a cluster at a tuition centre.

Health Minister Ong Ye Kung, citing a conversation he had with the ministry’s director of medical services Kenneth Mak, said Sunday that the B.1.617 strain, first detected in India, “appears to affect children more”.

“Some of these mutations are much more virulent and they seem to attack the younger children,” Education Minister Chan Chun Sing said.

“This is an area of concern for all of us,” he said, adding that none of the infected children was seriously ill.

The government is “working out the plans” to vaccinate students under the age of 16, Chan said in a Facebook post.

Taiwan’s capital Taipei and adjacent New Taipei City announced Monday that schools would suspend classes from Tuesday until May 28.

The island emerged relatively unharmed by Covid-19 last year, but it announced a further 333 local cases Monday, bringing the total to just over 2,000.

Authorities on Monday also said all foreigners would be barred from entering or transiting Taiwan for the next month unless they had a residency card.

In the latest round of restrictions, Singapore has limited public gatherings to two, banned restaurant dine-ins and closed gyms.

But by global standards, Singapore’s overall outbreak has been mild — officials in the city of 5.7 million have reported more than 61,000 cases so far and 31 deaths since the start of the pandemic.

But the latest spike has hit a quarantine-free travel bubble with Hong Kong, which was due to begin May 26 after an earlier failed attempt.

A Hong Kong government spokesman said that “in view of the recent COVID-19 epidemic situation in Singapore”, the two governments had decided to delay the bubble.