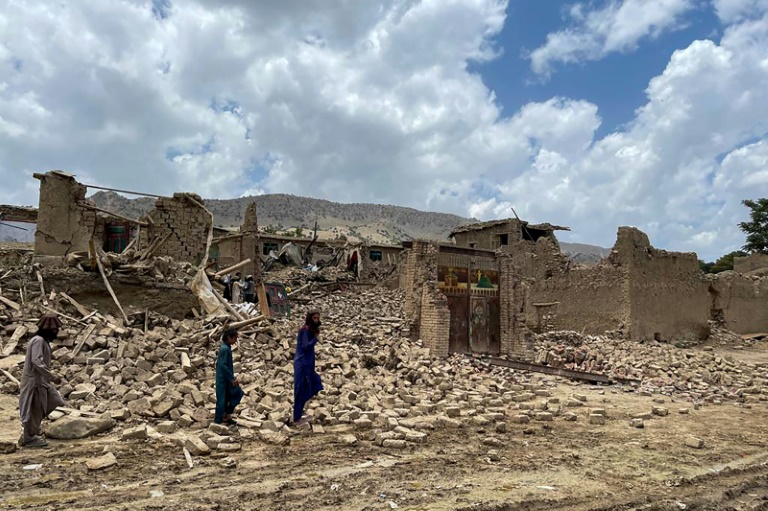 The rubble outline of collapsed walls and roofs is all that remains of the village where Zaitullah Ghurziwal lives, ravaged by a ruinous earthquake in Afghanistan that has left at least 1,000 people dead.

Survivors in Ghurza wander around in shock, looking for a place of shelter — or to the sky in hope that aid will be delivered by aircraft.

“There are no blankets or tents… there’s no shelter. People are lying on open ground,” Ghurziwal tells AFP, pointing to the crumbled dwelling where he now holds out with six other families.

“We need food and water. Our entire water distribution system is destroyed. Everything is devastated.”

The disaster poses a huge logistical challenge for Afghanistan’s new Taliban government, which has isolated itself from much of the world by introducing hardline Islamist rule that subjugates women and girls.

Remote Ghurza is one of many small mountain villages in Bermal district, one of the wost-affected areas.

Aid is beginning to trickle into the valley –- a military helicopter seen flying overhead dropped food to hard-to-reach places and collected some injured to deliver them to hospital — but an AFP team saw no United Nations presence on Thursday.

After the horror of the first hours, villagers have already dried their tears — misfortune is well known in this area, one of the poorest in a country ravaged by humanitarian crises, neglect and decades of war.

On Wednesday the villagers buried about 60 people, and 30 more followed on Thursday.

“We didn’t even have a shovel to dig with, no equipment, so we used a tractor,” says Ghurziwal.

In the middle of a courtyard, his octogenarian mother, slightly injured, is lying on a bed, sheltered from the sun by a sheet.

The previous night children took refuge from the heavy rain in a wheel-less car.

Nawab Khan tells AFP he lost seven members of his family: his wife and six children.

Nearby, a tent is erected next to a levelled house, providing shelter for about 15 women and children.

“I buried them today,” she says, giving her name as Zulfana.

Now, there is nothing to be done but wait for aid and rescuers to arrive.

“I feel so helpless, I don’t have a single penny,” she sighs.