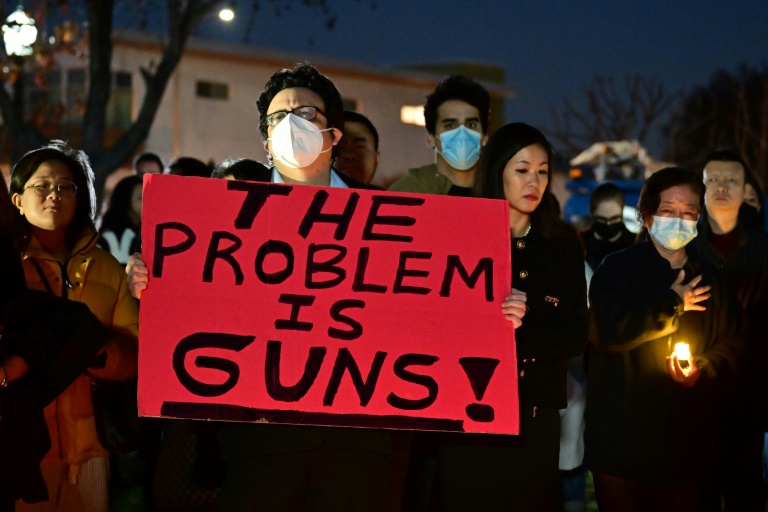 When an Asian man sprayed bullets around a dance studio full of Asian revelers in California, it sent shockwaves through the community.

When another Asian man attacked fellow Asian and Hispanic farmworkers in the same state two days later, that shock turned to disbelief.

“What the hell is going on,” tweeted CNN correspondent Kyung Lah.

After Huu Can Tran, 72, was revealed as the suspect behind the massacre in Monterey Park on Saturday, an initial narrative of anti-Asian hate crime quickly gave way to a baffled groping for answers.

That was reinforced less than 48 hours later when Chunli Zhao was arrested on suspicion of mutiple murders in the small rural community of Half Moon Bay.

For some Asian Americans, the sudden eruption of violence is a corruption of what they hold dear.

“Mass shootings are an American thing; it doesn’t happen in China, so that means Asians here have soaked up this Americanness,” longtime Monterey Park resident Wynn Liaw told AFP.

Despite perceptions, extreme gun violence carried out by Asians and Asian Americans is approximately proportionate to population size.

The nonpartisan Violence Project says 6.4 percent of mass shootings in the United States between 1966 and 2020 were carried out by an ethnic Asian.

2020 census figures show around 7.2 percent of the population of the United States identified as Asian or mixed Asian.

But for many Asian Americans, it doesn’t feel like that.

“People moved here because it was a Chinese community. They were more comfortable, and also it was safer,” said Liaw, who arrived as a child with her family from Wuhan in 1982.

“I lost my sense of security since Saturday.”

Monterey Park is a home away from home for its largely Asian community, a proudly — or stubbornly — unintegrated corner of melting pot America.

Two thirds of the 60,000 people who live there are Asian; Mandarin is more commonly heard than English in shops and banks, and street signs are dominated by Chinese characters.

Wedged between Los Angeles and the San Gabriel Valley, it was marketed as a “Chinese Beverly Hills” by a local real estate magnate, attracting Taiwanese, Hong Kongers and latterly mainland Chinese.

“It is the 1st Asian ethnoburb: an ethnic enclave in the ‘burbs that thrives b/c it refuses to assimilate, instead unapologetically catering to its own immigrant community,” tweeted Bianca Mabute-Louie, a PhD candidate at Rice University.

“My grandparents never learned english yet thrived because of the ethnoburb.”

While the ethnoburb may have kept America out for the last few decades, the weekend’s mass shooting in Monterey Park brought America crashing in.

Professor James Zarsadiaz, a specialist in Asian American history at the University of San Francisco, said the events of the last few days had been profoundly disorienting for the community.

“I think for a lot of Asian Americans, what occurred, especially Monterey Park… was jarring and triggering (because) we assumed that the acts that were committed were anti-Asian in nature,” he told AFP.

“But these two perpetrators are of Asian origin, and so it feels as if these are anomalies.”

Zarsadiaz said an emphasis on respect and reverence, rather than confrontation, undergirded a broader Asian culture, which is sometimes expressed in the stereotype that “they don’t complain.”

The flipside is that difficult emotions tend to get bottled up.

“There’s just a cultural notion that you ‘deal with it’,” he said.

As Monterey Park and Half Moon Bay pass into the lexicon of American tragedy, alongside Sandy Hook, Uvalde and countless other sites of carnage, Zarsadiaz said there was a glimmer of hope that it could be a turning point for the Asian American community.

There are “Asian Americans who see these moments as actually a marker of political advocacy and action. Because, you know, this is obviously now about gun violence.”

For Wynn Liaw in Monterey Park, it is tough to accept that her once-idyllic home now bears the same stain that disfigures other parts of her adopted country.

She says she probably won’t, but she does think about leaving.

“I see people in China, they are almost in a childlike innocence,” she said.

“The government shutters them but there are no guns, they have no drug addiction. So it feels like being a child: they work hard, study hard and they play. They’re happy.”