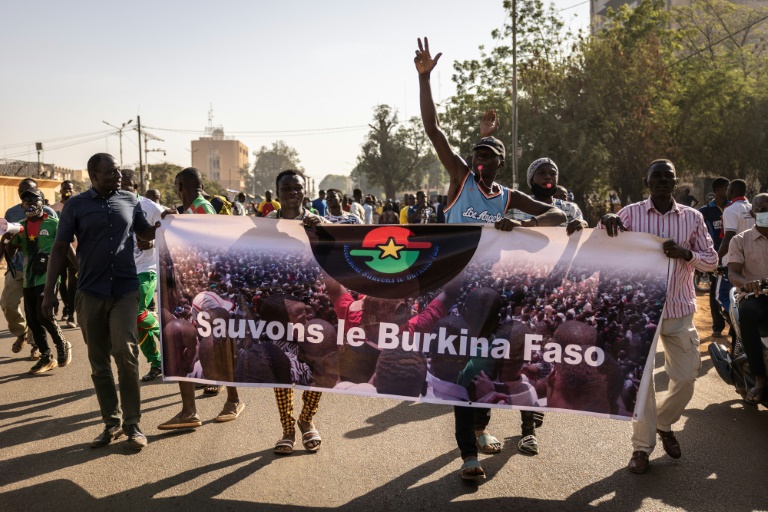 A child and two journalists were among several injured in the Burkina Faso capital Saturday after police fired tear gas to disperse an anti-government rally over jihadist violence in the impoverished country.

Ouagadougou city authorities had banned the gathering, which aimed to voice frustration at the failure of President Roch Marc Christian Kabore to stem the bloodshed.

Riot police fired tear gas to prevent hundreds of demonstrators from gathering in a square in the centre of Ouagadougou, where substantial police and security forces were deployed and all shops closed.

Angry youths erected makeshift barricades and burned tyres in several neighbourhoods, including in front of the ruling party headquarters, in an effort to block police movement.

One protester said he and others had come down for a peaceful protest, but that the police’s reaction had been excessive, forcing them to set up the barricades.

“We don’t want to burn down a country already at war, but when faced with savagery, we will defend ourselves,” he said.

An AFP correspondent said a child who appeared younger than 10 was injured after security forces fired the tear gas.

Herve Ouattara, a spokesman for the November 27 Coalition that called for the protest, reported “a huge amount of injured”, including two in a coma. It was not immediately possible to independently verify this claim.

Some youths vandalised part of the civil registry building, after trying unsuccessfully to torch the town hall.

In another incident, a mob attacked the car of a journalist reporting for AFP.

“The crowd set upon us, throwing stones,” photo-video reporter Olympia de Maismont said. “They wanted to block our car and yelled ‘France, we don’t want you here!'”

“We managed to escape, but just barely.”

Police also used tear gas to disperse demonstrators in the nation’s second city of Bobo Dioulasso in the west, and in the city of Kaya north of the capital.

One of the protesters, 28-year-old Fabrice Sawadogo, said that “after seven years of failure to prevent the terrorist attacks… it is time to ask the government to go”.

The “incompetent” administration “has to admit it has failed”, he added.

The November 27 Coalition had called for people to take to the streets on Saturday “in a peaceful atmosphere to denounce growing insecurity and demand the departure” of Kabore.

A member of the group said several protesters had been detained, including one of its leaders, but did not give an exact number.

Security Minister Maxime Kone said on national television that some members of the security forces had been injured, but said he did not yet have the figures for injured on both sides.

“The law must prevail,” he said, “And we are going to work to ensure that those who backed or called for the march answer for their acts.”

Other civil society groups had earlier denounced the protests and “those who want to push the country into chaos”.

The government said it had decided “to extend a suspension of mobile internet for 96 hours from Wednesday” following a four-day outage for “security reasons.”

Kabore has faced mounting anger over the failure to stem a jihadist insurgency that swept in from neighbouring Mali.

Groups linked to Al-Qaeda and the so-called Islamic State group have plagued the landlocked Sahel nation since 2015, killing about 2,000 people and displacing 1.4 million from their homes.

An attack on November 14 saw hundreds of fighters storm a gendarmerie camp at Inata in the north of the country, killing 53 police and four others.

It was the biggest daily loss among the security forces in the history of the insurgency.

In a speech late Thursday, Kabore said the “unacceptable dysfunctions” hampering the effectiveness of the armed forces had to be dealt with.

“Our soldiers should not be abandoned as a result of bureaucracy or clearly culpable negligence.”

Burkina Faso is one of the world’s poorest countries and its armed forces are ill-equipped to tackle highly mobile jihadists.

In this article:burkina faso, Jihadists, violence