Their research shows once again that any ‘technofixes’ to allow mining and drilling for coal, oil and gas to continue would be ineffective in preventing climate change, Pan European Networks (PEN) reports.

In what is known as a “thought experiment,” or Gedankenexperiment, scientist Sabine Mathesius, of the Helmholtz Centre for Ocean Research, Kiel, and the Potsdam Institute for Climate Impact Research, and several colleagues decided to demonstrate what could be achieved in regards to climate change by using a method, PEN reports, that has yet to be proven: Removing large volumes of carbon dioxide from the atmosphere. This could be done by growing vast numbers of trees, burning them and thus trapping the resulting C02, then compressing it and burying it.

Doing this could take around 90 billion tonnes of C02 out of the atmosphere each year, the researchers estimated, double the amount released from factories and vehicle exhausts today.

The scientists concluded this would return our atmosphere to the concentrations of greenhouse gases that existed for most of human history, The Guardian reports.

Unfortunately, it wouldn’t save the oceans, they realized.

Instead, the oceans would stay warmer and more acidic for thousands of years. For sea creatures, the consequences could be devastating.

The results of the study, published in Nature Climate Change Today demonstrates that as yet, there’s no feasible “technofix” that could allow humans to keep mining and drilling for coal, oil, and gas in what’s termed the “business as usual” scenario and then geoengineer a solution once climate change becomes calamitous.

“Interestingly, it turns out that after ‘business as usual’ until 2150, even taking such enormous amounts of C02 from the atmosphere wouldn’t help the deep ocean that much – after the acidified water has been transported by large-scale ocean circulation to great depths, it is out of reach for many centuries, no matter how much C02 is removed from the atmosphere,” co-author Ken Caldeira, of the Carnegie Institution in the U.S. told the Guardian.

Our oceans spread over 70 percent of the globe. It’s estimated that by 2500, ocean surface temperatures will have increased by 5C and the chemistry of ocean waters will become more acidic, making it difficult for fish and shellfish to flourish. Warmer waters contain less dissolved oxygen, and it’s also likely that ocean currents will change.

Change can happen in the atmosphere in the span of a few decades, but change in the ocean surface takes centuries, and in the deep oceans, it can take thousands of years. So that means even if atmospheric temperatures were restored to levels before the Industrial Revolution, the oceans would continue to experience catastrophe, the Guardian reports.

A study coinciding with the one above reports that even using the most aggressive timetable for reducing greenhouse-gas emissions will need a huge boost from carbon removal schemes that are largely untested if we are to cap warming at 2 degrees Celsius above pre-industrial levels. ABC Science reports.

Anything higher than that threshold and the risk of climate calamity rises sharply, scientists say. And Earth is currently on a 4 degrees Celsius trajectory.

“In the deep ocean, the chemical echo of this century’s C02 pollution will reverberate for thousands of years,” said co-author Hans Joachim Schellnhuber, who directs the Potsdam Institute. “If we do not implement emissions reductions measures in line with the 2C target in time, we will not be able to preserve ocean life as we know it.” 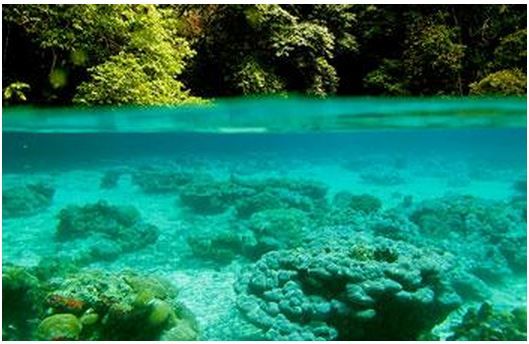 If we waited a century before gulping massive amounts of C02 out of the atmosphere, corals will have vanished, and many other marine species will become extinct. The ocean will be rife with dead spots, the researchers say, per ABC Science.

“We show that in a business-as-usual scenario, even massive deployment of C02 removal schemes cannot reverse the substantial impacts on the marine environment — at least not within many centuries,” Mathesius says, per ABC News.

Even if large-scale carbon removal begins in 2050 (if such technology is available, that is), the oceans will still suffer.

“Immediate and ambitious action to reduce C02 emissions is the most reliable strategy for avoiding dangerous climate change, ocean acidification, and large-scale threats to marine ecosystems,” the researchers concluded.

This should sound an alarm, said scientists who commented on the study.

Both of these studies were published months before 195 nations are scheduled to meet in Paris in an effort to build a climate pact, and the studies conclude that deep and swift cuts in C02 emissions are crucial.

So the clock is ticking, but the question remains: Will we act in enough time to save our oceans and the life within?