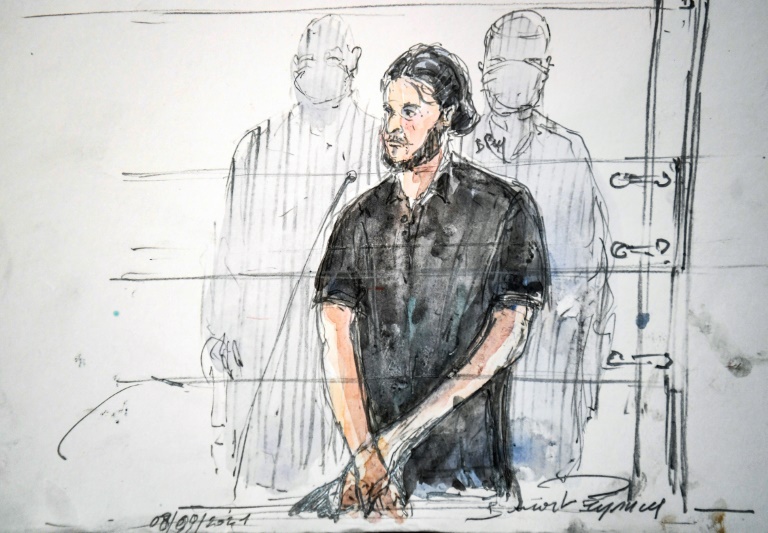 Salah Abdeslam, handed a life sentence on Wednesday for his role in the November 2015 attacks on Paris, is the sole surviving member of the terror cell that massacred 130 people in the French capital.

Abdeslam was sentenced to a whole-life term, which offers only a small chance of parole after 30 years, only the fifth time in French legal history such a punishment has been handed out.

A Brussels native with a long criminal record, he was also a pot-smoking lover of parties and casinos before falling under the thrall of radical Islam.

The court heard how he and elder brother Brahim moved from a life of drugs and delinquency in the crime-ridden Molenbeek area of the Belgian capital to dreaming of an Islamic caliphate.

The pair ran a dingy local bar, Les Beguines, which was a dealers’ hangout before becoming a secret location for watching extreme IS videos after the group seized territory in Iraq and Syria from 2014.

“I tell you: we fought against France, we attacked France. We targeted the population, civilians, but in reality, it was nothing personal against these people,” an unrepentant Abdeslam said in September as the trial opened, parroting IS propaganda.

His descent into the Islamist death cult came under the influence of his childhood friend Abdelhamid Abaaoud, who became a key IS recruiter and ringleader for the Paris attacks.

In February 2015, Brussels police summoned Abdeslam to discuss Abaaoud who had appeared in a gruesome video from Syria, showing him driving a pick-up that was dragging mutilated bodies to a mass grave.

“Apart from the jihad, he’s a good guy,” Abdeslam said during an interview, hiding his own plans to follow other Molenbeek locals to Syria.

Over the course of the nine-month Paris trial, the one-time tram technician outwardly changed, dropping his early bravado and defiance to become more outwardly remorseful.

He blamed his early behaviour on his detention conditions — solitary confinement with round-the-clock video surveillance since his arrest in March 2016.

“When I arrived in this setting, after six years of isolation where they prevented me from talking to anyone, it was a social shock,” he said, adding that he had “been a bit hard with words and I regret it”.

In April, after months of refusing to testify, he declared that he would account for himself to prove that he was not “the monster without humanity” that he had been made out to be.

According to his version of events, he was approached by Abaaoud to take part in the Paris attacks as a suicide bomber two days before the mission.

“It was a shock for me,” he told the court, but “I ended up accepting.”

After dropping off three bombers outside the national stadium on the night, his job was to detonate himself in a bar in the trendy 18th district of the capital.

“I go into the cafe, I order a drink, I look at the people around me and I say to myself ‘no, I’m not going to do it’,” he told the court.

He discarded his suicide vest in a bin and fled back to Brussels where he went on the run for four months.

His brother Brahim embraced his mission, gunning down young people in cafes before blowing himself up.

The prosecution highlighted inconsistencies in his account and also pointed to handwritten letters, full of grammatical mistakes, which he wrote while in hiding.

“My dear younger sister, I imagine it must be difficult for you to be separated from your two brothers, and everyone is calling us terrorists as well. Understand that we only terrorised infidels,” he wrote.

In April, Abdeslam sobbed in court and pleaded for forgiveness after weeks of testimony from survivors about their loss and injuries.

In his final statement, he begged the judges not to punish him for the crimes of others, seeking to emphasise that he had not killed anyone himself.

Observers were left wondering whether the man at the start of the trial had seen the light after coming face-to-face with the people his actions harmed.

“I think that Salah Abdeslam behaved like a terrorist, that his brother was a terrorist and that he, even after the event, was still a terrorist,” lawyer Gerard Chemla, who was acting on behalf of victims, told AFP.

“After that, the rest leaves me rather indifferent.”