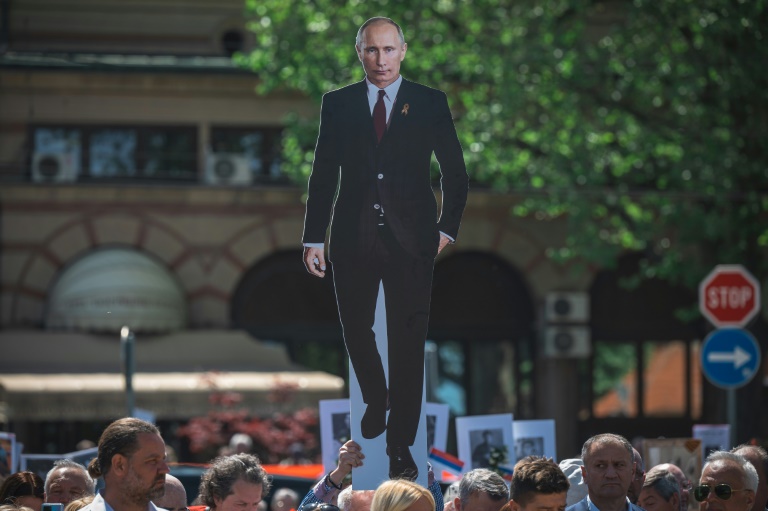 After 12 years together, it was Russian propaganda that finally ended Liubov Maric’s marriage to her Serbian husband.

The Ukrainian admits they had been having difficulties, but after the invasion of Ukraine in February things began to spiral as her husband lapped up vast amounts of Russian propaganda.

The man she had once fallen in love with was no longer recognisable, she said, even forbidding their son from listening to Ukrainian folk music, calling it the work of “Nazis”.

“I had hoped for support and understanding, but he started blaming everyone but the Russians,” Maric, 44, told AFP.

Shortly thereafter she packed her bags and despite the war returned to Ukraine.

Kremlin propaganda has found a willing audience in Serbia, where simmering hatred towards NATO and the US has led many to side with Moscow.

While most of Europe has sought to clamp down on Russian news outlets, they flourish in Serbia where even state-backed media often parrot the Kremlin line.

“I think the truth is somewhere in between, but nobody is reporting it. So I follow both Russian and Western media and try to read between the lines,” said Dario Acimovic, a 27-year-old graphic designer.

“They (the West) have cut off Russian media so they don’t get to hear the other side. All you get as a result is hysteria.”

Under the rule of President Aleksandar Vucic, Serbia’s media has increasingly been forced to toe the government line, while the few remaining independent outlets have faced sustained pressure from authorities.

During the run-up to the war, Serbia’s leading tabloid, Informer, printed numerous gushing articles praising Vladimir Putin along with a cover story two days before the invasion with the headline, “Ukraine has attacked Russia.”

“Serbia’s pro-government propaganda outlets created Putin’s personality cult that even surpasses the one they built for Vucic,” said Dinko Gruhonjic, associate professor of journalism at University of Novi Sad.

“He enjoys a practically divine status,” he added.

According to the latest opinion poll by Belgrade-based democracy watchdog Crta, two-thirds of the population feels “closer” to Russia.

Three-quarters of Serbians also believe the Kremlin was forced into war “due to NATO’s intentions to expand”.

The same survey suggested that 40 percent of the population were in favour of dropping the country’s long pursuit of joining the European Union and allying with Moscow instead.

“Pro-government media have a clear positive stance on Russia, are neutral towards the EU and negative towards Ukraine,” said Vujo Ilic, a researcher and one of the survey’s authors.

“Russia is the alternative shown to voters to prove that Serbia can make it without the European Union,” he added.

Cultural and historic ties between the two predominantly Slavic and Orthodox Christian countries stretch back centuries, leading many Serbs to be warm toward Russia.

In the capital Belgrade, T-shirts featuring Putin’s face are sold from souvenir kiosks, while the letter Z — which has become the Russian symbol for the invasion — has been painted on walls across the city.

The scars from the NATO-bombing campaign against Serbia in 1999 during the war in Kosovo remain a bitter wound for many.

“I remember what they wrote about Serbs during the wars. We were portrayed as animals. As it wasn’t true then, it’s not true now what they say about the Russians.”

The coverage of the war and consumption of news from Russian sources has not gone unnoticed, with the Ukrainian ambassador in Belgrade raising his voice in protest, saying that “citizens of Serbia are not properly informed”.

But staying up to date with accurate news on the war is not always easy in Serbia.

Even for an Ukrainian like Maric — with access to first-hand accounts from home — navigating her way through the deluge of misinformation and outright propaganda in Serbia is difficult.

“Their propaganda is so efficient that after five minutes of reading, I start to question myself,” she said.