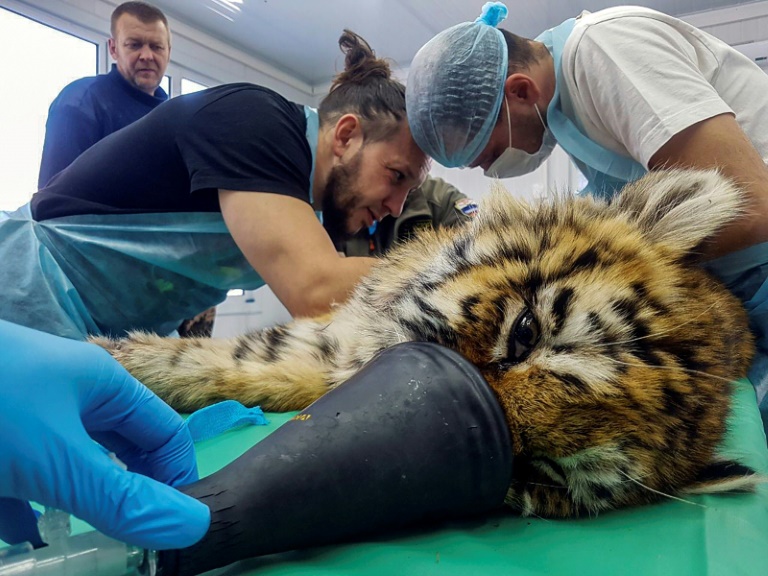 Russian animal rescuers said Wednesday they were fighting for the life of an Amur tiger cub who had been found dying from exhaustion and frostbite in the country’s far east.

An emaciated female tiger cub aged around four or five months and suffering from severe frostbite and injuries was found by a local fisherman on a river bank in the south of the Primorye region late last year.

The fisherman reported the find to wildlife carers who evacuated the cub to a rehabilitation centre, said Amur Tiger Centre.

“External examination showed that she was severely exhausted as a result of which the tip of her tail was frostbitten,” the centre said, adding that the cub’s lower jaw also became necrotic after an injury.

The tiger, who weighed just around 20 kilogrammes (44 pounds) — roughly half the norm — when she was found, underwent an intense rehabilitation course and gained about 10 kilogrammes in preparation for surgery. The dead tip of her tail was also cut off.

The surgery was successful but it is too early to make any predictions and say if it will be possible to release the cub back into the wild, said Amur Tiger Centre.

“The most important thing right now is to halt the tissue necrosis and save the tiger’s life,” said Sergei Aramilev, the centre’s head. “People are doing their best.”

Russia and China are home to the big cats which are also known as Siberian tigers and are listed as “endangered” by the International Union for the Conservation of Nature’s Red List.

There are around 600 tigers in Russia, said Pyotr Osipov, head of the Amur branch at WWF.

President Vladimir Putin has personally championed the protection of the Amur tiger.

In 2010, Putin, then the country’s prime minister, hosted an unprecedented 13-state summit that aimed at doubling the big cat’s population.