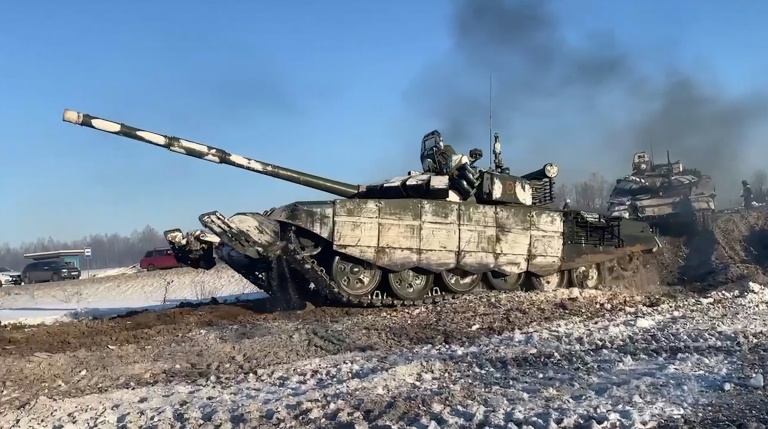 Whether they have been camped out on Ukraine’s borders or moving tanks across the vast country, Russia’s battle-hardened troops have made the world listen to Vladimir Putin, who wants to redefine European security.

President Putin has made reviving the army one of the top priorities of his 20-year rule.

“The Ukraine crisis has demonstrated, for the first time since the end of the Cold War, Russia’s readiness to use military force to prevent further expansion of the Western alliance into former Soviet territory,” he said.

“The geopolitical retreat that Russia began three decades ago has ended.”

For months Russia has been moving troops towards the border with pro-Western Ukraine, prompting Western capitals to warn a Russian attack was imminent and start pulling personnel out of the country.

Amid Russia’s latest show of force the United States relocated its embassy in Kyiv to the western Ukrainian city of Lviv, citing a “dramatic acceleration” in the build-up of Russian troops.

On Tuesday, Russia announced that some of the troops were returning home following the planned conclusion of exercises but other military drills were ongoing.

For months, social networks have been flooded with images of Russian tanks parked in the snow near the Ukrainian border or trains transporting multiple rocket launchers and other materiel.

On the EU doorstep, Russia has flexed its muscles in Belarus, during joint drills that involved sophisticated weapons systems such as S-400 surface-to-air missiles and Pantsir air defence systems.

With roughly one million active-duty military personnel and state-of-the-art weapons, the Russian army is one of the largest and most powerful in the world.

Moscow has the world’s second-largest arsenal of nuclear weapons and a huge cache of ballistic missiles.

Putin has also boasted of developing a number of “invincible” weapons that can surpass existing systems, including the Sarmat intercontinental missiles and Burevestnik cruise missiles.

In recent years the Kremlin strongman has scored a number of battlefield — and foreign policy — triumphs that helped boost his popularity despite economic malaise at home.

In January, Russia swiftly sent troops to the Central Asian nation of Kazakhstan to back a Kremlin-friendly regime in what was touted as a peace-keeping operation amid deadly unrest.

In 2015, Russia charged into Syria with an air campaign that turned the tide of a complex conflict in favour of the Damascus regime.

The intervention helped President Bashar al-Assad reclaim swathes of territory his forces had lost to Islamists and Western-backed opposition groups. Syria has also proved a valuable training ground for the Russian military.

In 2008, Russian troops routed the Georgian military in five days of fighting.

“The army is a good tool of influence,” Vasily Kashin, a military analyst at Moscow’s Higher School of Economics, told AFP.

“From a military point of view, any concentration of troops requires a response,” he added.

But analysts also point out that apart from the show of force, the Kremlin has few other powerful levers to assert its influence on the international arena.

The West has repeatedly accused Moscow of using its vast energy resources as a geopolitical tool, but observers say Russia cannot afford to deprive itself of the major source of hard-currency income.

Russia’s military modernisation has also come at the expense of key economic diversification efforts and major infrastructure and social projects.

However impressive, the Russian army cannot compete with the American war machine, and if war breaks out there will be no winners.

“Hypothetically, the Russian army would be capable of countering NATO forces in Europe for some time, but in general, in terms of conventional weapons, the United States has a very significant superiority over Russia,” said Kashin.

“Any direct military clash with NATO in Europe will lead to an uncontrollable escalation and the spillover into a nuclear war.”