The research team has been examining the plant’s No. 2 reactor since April of 2014 using muon particle scanners in a search for reactor fuel in what remains of the reactor’s core.

Muon particle scanners are nothing more than a form of tomography, much like the familiar CT scan done in hospitals. The big difference is the technique used by the research team involved the use of elementary particles, called muons, to produce a 3D image.

Muon tomography is used to image much thicker materials than those scanned by x-ray tomography, like a CT scan. In 2011, the Japanese government initiated a “cold shutdown” of the plant, starting a new phase of the cleanup. But it is difficult to clean up something if you can’t get close enough to find out what’s inside. 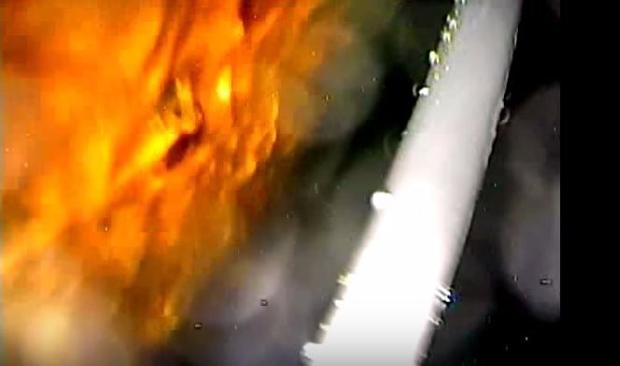 A look inside the No. 2 reactor core at Fukushima in January, 2015.
Youtube

The findings were presented today at a meeting of the Physical Society of Japan in Osaka. While those who have been following the Fukushima Nuclear Plant disaster since 2011 will realize this isn’t anything new, it is significant. Third-party involvement is something new in the investigation into the decommissioning process at Fukushima.

As more “outsiders” have become involved, it makes it harder for the Japanese government and in particular, TEPCO to continue to use public relations-based rhetoric in explaining what is really going on at Fukushima, especially in the news releases that say the disaster was less severe than it really was.

The study showed there was very little fuel in Reactor No. 2, as compared to Reactor No. 5, where the fuel is clearly visible at its core. The team believes that while 70 to 100 percent of the fuel has melted, there is still more work to be done. They still have to find out if any of the fuel penetrated the reactor core.

April of this year saw the first time a robotic device was used by TEPCO to try and get a look inside the crippled reactors. As reported in Digital Journal, the snake-like device was equipped with cameras, a thermometer, and dosimeter, and was supposed to last 10-hours in the extremely radioactive environment inside the reactor building.

Since that initial exploration, 16 robots have been used to explore the crippled plant, from military models to radiation-resistant multi-segmented snake-like devices that can fit through a small pipe. However, even the toughest robots have not been able to stand up to the overwhelming power of radiation being emitted inside the reactors. And it would be suicide for a human to even get close.

TEPCO has made a tremendous effort in trying to contain the contamination, and at the same time work to decommission the power plant, a project that will take decades to accomplish. But despite their best efforts, the whole process has been marred by mistakes, misinformation and coverups.

During the recent flooding caused by Tropical Typhoon Etau, 82 bags of what is believed to be contaminated waste were swept out to sea. RT reports on the statement issued by TEPCO: “On September 9th and 11th, due to typhoon no.18 (Etau), heavy rain caused Fukushima Daiichi K drainage rainwater to overflow to the sea,” TEPCO said in a statement, adding that the samples taken “show safe, low levels” of radiation. From the sampling result of the 9th, TEPCO concluded that slightly tainted rainwater had overflowed to the sea; however, the new sampling measurement results show no impact to the ocean.”

What is really disconcerting is the long-term effects the nuclear meltdown will have on the people of Japan, not just those who were evacuated from towns near the plant, but for the whole population. Japan is also part of the Pacific Ring of Fire, and is also prone to volcanic eruptions and earthquakes, some of them quite severe.

The Japanese people realize this and opposed the restart of any nuclear power plants, yet, despite the majority opposition, the government has chosen to go ahead and put nuclear plants back online.