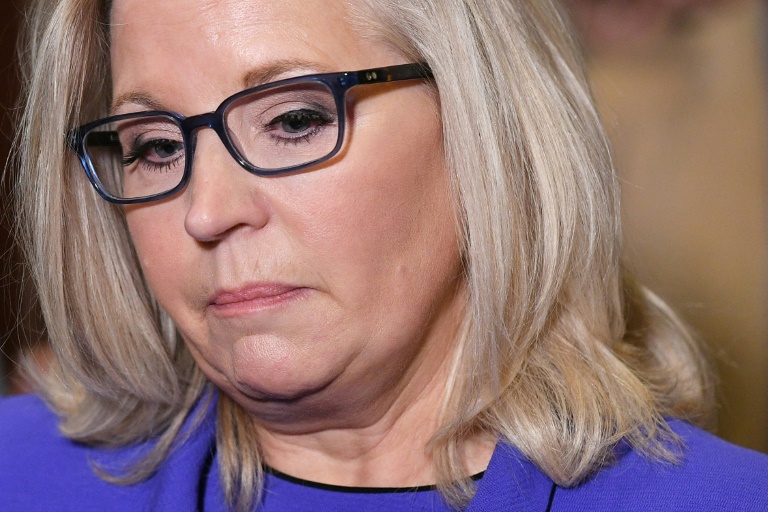 US House Republicans on Wednesday ousted conservative Liz Cheney, a fierce critic of Donald Trump, from her powerful leadership role in a move that tightens the former president’s grip on the party.

Eighteen months before crucial midterms and three years before the next presidential race, the Republican Party punished one of its own for her refusal to embrace Trump’s false claim that Democrats stole the 2020 election.

Cheney, daughter of former vice president Dick Cheney, remains a member of Congress but was removed from her role as the number three House Republican.

A swift, closed-door voice vote by the party conference offered her up as the latest political sacrifice in the GOP’s alignment with Trump.

The Wyoming lawmaker told reporters afterwards that she would continue fighting for conservative principles and against the embrace of a one-term leader who keeps spreading voter fraud falsehoods.

“We cannot be dragged backwards by the very dangerous lies of the former president,” Cheney said.

“We must go forward based on truth. We cannot both embrace the big lie and embrace the Constitution.”

The 54-year-old also stood firm against the prospect of Trump running for president again in 2024.

“I will do everything I can to ensure that the former president never again gets anywhere near the Oval Office,” she said.

Other Republican leaders argue the internal squabble is about unity, and that Cheney’s relentless Trump bashing has done nothing to bring a fractured party together following an election that left them sidelined from power.

But House Republican Adam Kinzinger who, like Cheney, voted to impeach Trump for inciting the deadly US Capitol insurrection January 6, scoffed at the notion that unity — and not bowing to Trump’s voter base — was the driving force behind Cheney’s forced martyrdom.

“Truth cannot coexist with lies,” Kinzinger said. “You cannot unify with that.”

Trump, ensconced in his private Florida club since leaving the White House in January, responded to Cheney in a typically abrasive, personal attack.

“Liz Cheney is a bitter, horrible human being,” he said in a statement after her ouster.

“She has no personality or anything good having to do with politics or our Country.”

Despite McCarthy overseeing the purge of a fellow leader, Biden signaled his readiness to negotiate with him and other Republicans on key issues such as the White House’s massive new infrastructure proposal.

“The bottom line here is we’re going to see whether we can reach some consensus on a compromise,” Biden said.

McCarthy, desperate to tamp down concern his party is spreading election fraud falsehoods, emerged from the White House seeking to calm the waters.

“I don’t think anybody is questioning the legitimacy of the presidential election,” he said, ignoring Trump and the many Republican lawmakers who regularly raise concerns about the vote’s integrity.

“I think that is all over with,” McCarthy said. “We’re sitting here with the president today.”

But the GOP remained absorbed by the Cheney-Trump schism.

The former president, McCarthy and number two Steve Scalise have all endorsed a young moderate-turned-Trumpist, Elise Stefanik, as Cheney’s replacement.

Stefanik, who in January opposed certification of results in some swing states that voted for Biden, has no serious competition for the post yet, and the endorsements make her the clear frontrunner.

But a vote for a new conference chair is not nailed down, as some Republicans worry that Stefanik, while a fierce Trump defender, is insufficiently conservative.

Nevertheless McCarthy has been clear that a change is needed, with leadership focusing on winning back congressional control.

While Cheney warns against clinging to the former president, many in the party, including Senator Lindsey Graham, believe it cannot move forward without Trumpism — whether or not Trump himself remains a force.

Cheney has been a “solid conservative” in Congress, Graham said after the vote, but “she has taken a position regarding former president Trump which is out of the mainstream of the Republican Party.”